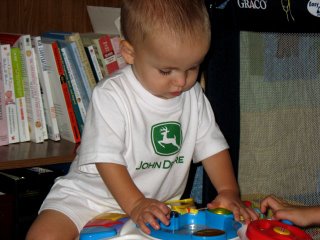 Thanks to my good friend Brandy from MOMS Club, we are enjoying a new Fisher Price activity table. I think her boys didn't find it exciting anymore, so she was looking for a new home for it. My kids, on the other hand, can't get enough of it. Its already sparked some arguments and pushing between the kids.

Dummy me... when we first got it home, I couldn't figure out how it worked. I pushed every button it had. I could not get the alphabet pictures in the middle to move from "Z" Zebra. We turned it off and let it sit. We checked the batteries. We pushed more buttons. I finally gave up and called my friend Brandy who admitted that she wasn't one to really play with it herself, so she was clueless. 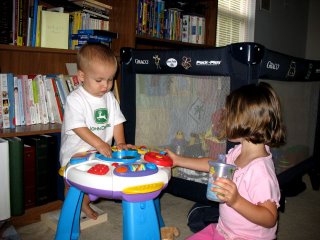 Finally, the next day, Jayce turned it on, pushed the lever up, and moved backwards through the alphabet. He is a good "fixer" of things. He knows how to get tops unscrewed, we found out, when we found him covered in apple juice one day. I even bought him some of those "snack trap" cups. You know, the ones that have rubber tops to catch the food if the cup gets turned over? You can put your hand in and take food out, but its supposed to be hard to dump the whole cup out. Jayce had it less than a minute before he was covered in baby goldfish in his carseat. He simply held the cup upside down over his head, looked at it, and stuck one finger up in side to move the rubber aside. And down came the fish.