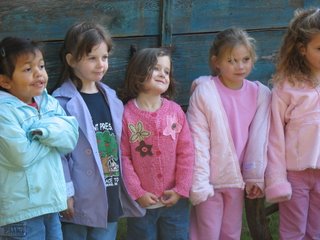 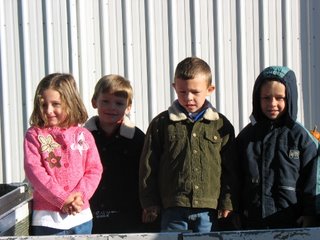 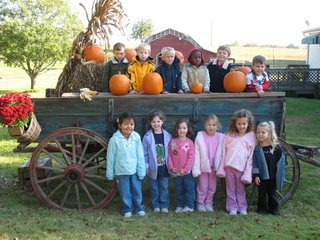 On Monday, I had the privledge of chaperoning Jaina's 4K class field trip to a local produce farm. Unfortunately, there aren't many actual "Pumpkin Patches" in South Carolina. I have yet to go to one where there are still pumpkins on the vine from which they grew. Typically, each farm just gets pie pumpkins (the smaller size so the kids can pick them up) and throw them out on a field and then let the kids "pick" one out.

Despite the parents being dissapointed, the kids had a blast! The only bad thing was the weather... SUPER COLD! It was in the 30's and the wind was downright frigid! Because we all expected it to warm up to the 50's or 60's, no one had thought to bring hats, mittens, or coats. After getting riding the windy wagon pulled by a tractor, all of us had throbbing ears and ice cold hands. We grabbed our pumpkins, took pictures, then headed back to the farm house. The only place for the kids to eat snack was a picnic area in the shade. Ms. BJ decided to just have everyone load up and head back to the preschool instead.

Brian was a super sport about it, having driven all the way from work to spend just 45 minutes at the pumpkin patch before we left! Jaina was so proud to be the only student there with BOTH her parents present. Since siblings aren't allowed to come, we had to leave Jayce behind with Grandma, but it would have been to cold for him anyway, so he didn't miss much.

Tonight we'll go to a local church and pick out some big pumpkins for us to carve this weekend! We love halloween at our house! 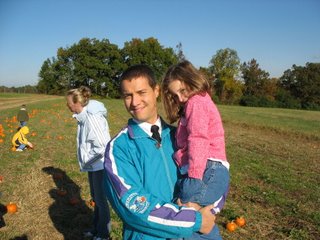 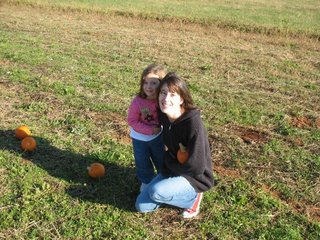