I've been meaning to write about our new addition every day for the past two weeks. But every time I sit down to upload pictures or write something, our update changes.

To say that Jackson has been a challenge is an understatement. 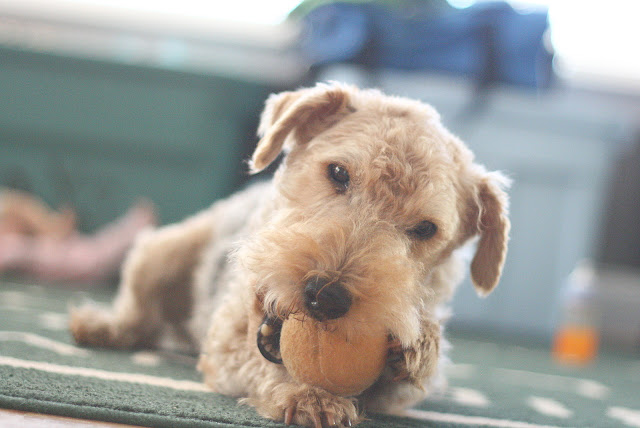 Don't let his sweet expression fool you. Or the fact that he is happily chewing on an appropriate dog toy.

He also likes to lift his leg to mark his territory, even after being rewarded for peeing outside. So far he's peed (or attempted to pee, but was caught in the act) on:
-the doll stroller
-the play food shopping cart
-Brian's jacket
-the barstool legs
-the refridgerator
-both my house plants
-a bag of baby clothes

He's also pooped on our door mats, both our inside and outside ones.

Don't let his size fool you, either. He may only be 13 lbs, but he can do the following:
-climb into toy boxes
-jump on the coffee table
-get food off the kitchen table
-reach the edge of the kitchen countertops
-jump off the back of the couch

Supposedly his previous owners stated that he can also climb a chain link fence. I don't doubt this for a minute!

Obviously Jackson needs to learn some manners! We have enrolled him in a behavioral training class that starts Tuesday. We are currently treating him like a puppy and crate training him again.

He's also very destructive with his "cone of shame" that he's needed to wear the last two weeks so his incisions will heal. We are currently boarding him at the vet so he can try to destroy his cone on THEIR watch  :) 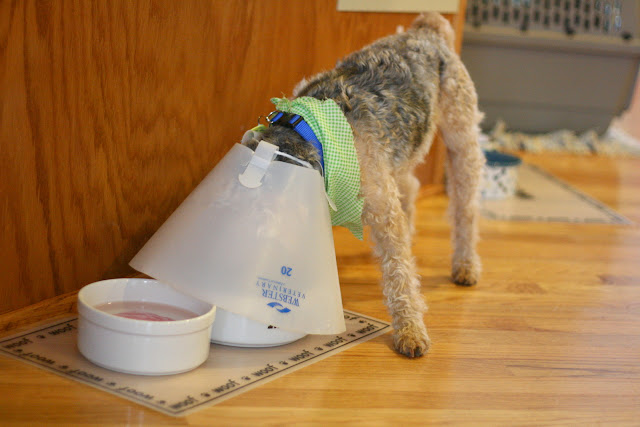 This was a picture of his cone the first day he had it on. I really should have taken a picture after it became muddy and beat up.

I'd like to say that Jackson and Shaggy are best friends, but so far, that is not the case. In fact, Jackson has not brought Shaggy out of the depression he's been in since Alli passed. He no longer whines when he comes in at night like he started doing the night Alli died, so that is a positive.

However, ever since I took Jackson to the vet to board yesterday, Shaggy has had a renewed energy. I can almost hear his thoughts, "YAY! That stupid dog is gone! I have my owners back to myself! Let's play! Its MY turn with that ball! Let's go!" His tail has not stopped wagging.