I turned 36 the day after Thanksgiving this year.

Eight days before that, I received the news that I have a medium saccular aneurysm in an artery at the base of my brain stem.

Um, yeah. I pretty much knew zilch about aneurysms before November 20th. I just knew they sounded bad and people died from them.

Oh, and they were different than embolisms, which are bad, too. You kinda don't want aneurysms or embolisms, just FYI.

So, here's what an aneursysm is:

An aneurysm is a blood-filled dilation of a blood vessel caused by a weakening of the vessel’s wall. Aneurysms typically develop because of the general wear and tear of blood pressure on the arteries’ walls, called hemodynamic forces. A weak spot in the artery wall bulges out, giving way to the pressure of the blood flow, forming a sac. For this reason, areas of artery or vessel wall which are submitted to higher blood pressures are more susceptible to aneurysm development, such as the branching points of arteries, called bifurcations. In the same way that a balloon stretches, the aneurysm sac balloons out from the vessel wall usually slowly, progressively becoming weaker.


I even have pictures to prove it. 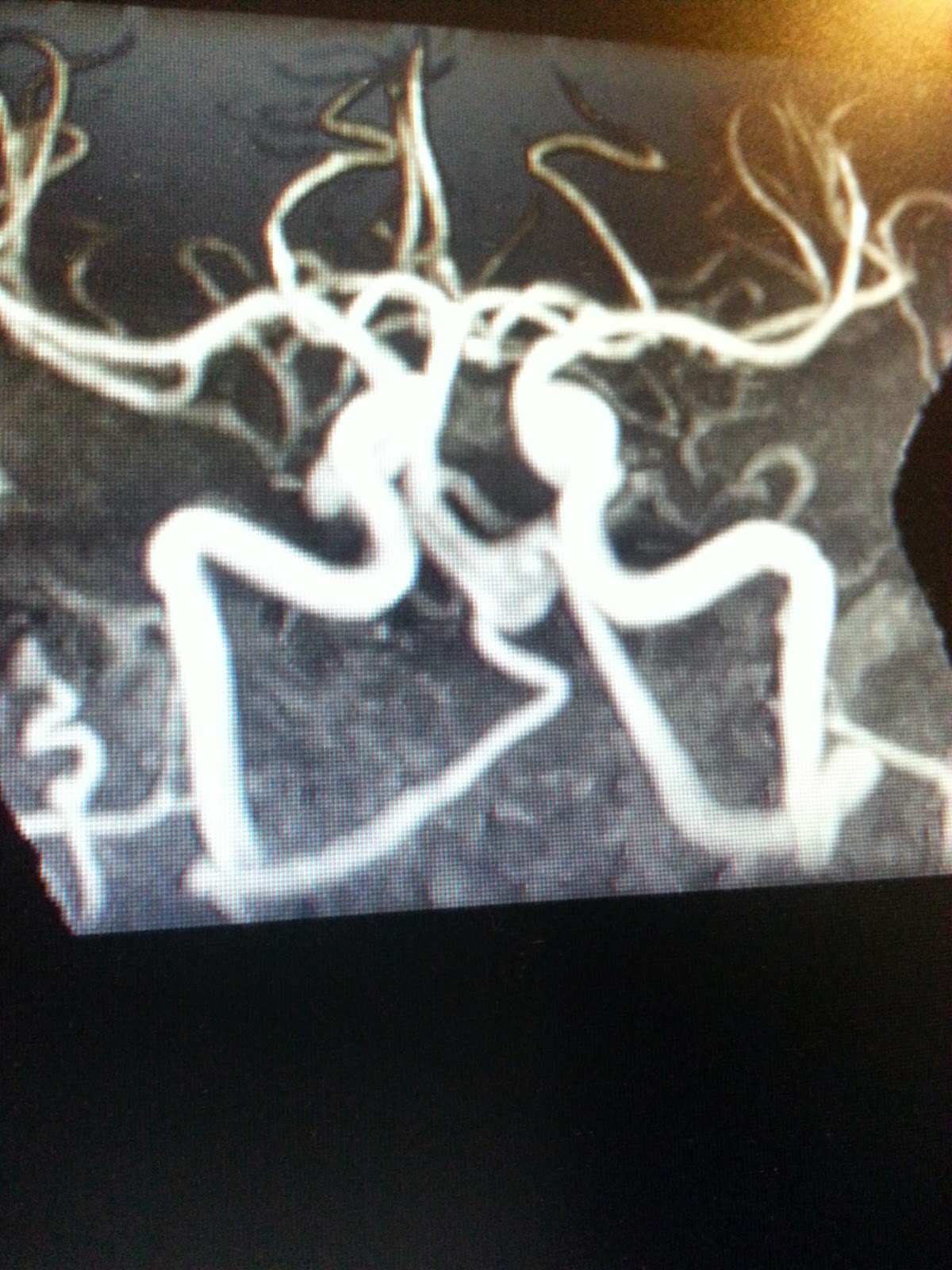 Although that's a cell phone pic of a computer screen, so its kinda hard to see it.

Good News: We found it completely by accident. My neurologist had ordered an MRI to find the source of my migraines. He found the aneurysm instead. Its true that many people that die from ruptured aneurysms never know they even had one. Its good to know what we are dealing with so we can prevent it from getting worse.

Bad News: My lovely aneurysm isn't really in a good spot. Normally, there are a few options for dealing with them, but location rules out two of them. Its also 10 mm in size, which is considered "medium" and it will continue to grow (at what rate is anyone's guess) and increase my chance for rupture.

And let's not forget that unruptured aneurysms typically don't cause any symptoms. I'd love to blame my daily headaches, frequent migraines, and my love for Excedrin Migraine on my birthday present, but I can't. And I can't blame my thyroid, either. My labs looked great.

The neurologist suggested I try a headache preventative called Topamax. It has a laundry list of side effects but I was willing to try it. He failed to mention that Topamax acts as a Co2 inhibitor and interferes with your body's ability to taste carbonated beverages.

I think you all know I'm the biggest Coca Cola fan alive. I drink it like most people drink coffee. Its my 8 ounces of indulgence every morning.

The first morning after I took my Topamax, I opened up a can of Dr. Pepper (the coke was out in the garage and I was being lazy) and took a swig.

"Hey Brian... something is wrong with this Dr. Pepper. I wonder if it froze out in the garage or something?"

I went out to the garage and grabbed a can of Coke.  Same thing. Damn, we were going to have to throw out that 6 pack, too.

A few hours later, we all had lunch at a local cafe. We all ordered Dr. Peppers (Pepsi products were being served there and we all know that Coke is NOT Pepsi!). I sipped my Dr. Pepper hesitantly and was dismayed to find out that this restaurant had the same problem with their soda that we did at our house.

Brian looked at me like I was an idiot. "Um, don't you think that YOU are the problem, NOT the soda? We all ordered the same thing. All of us think the Dr. Pepper tastes fine. Its not us. Its you."

My two friends, masters of the Google Search, quickly confirmed that Brian was right.

And, just like that, I had tasted my last taste of soda for a while.

I guess I could learn to live without soda if I truly needed this medicine and if it truly worked. However, it doesn't. Several unpleasant side effects, three migraines, and many days worth of headaches later, and we've pretty much decided that Topamax doesn't work for me.

As far as the aneurysm goes, I'm still waiting on the Greenville specialist to review my chart and see what they are going to do with me. I'll keep everyone updated :)

In the meantime, we continue to make jokes as only people with our dark sense of humor can appreciate.

"Hold on there... don't go giving yourself an aneurysm or anything! Oh, wait... too late."

And now all my readers can go insist on having MRIs to make sure they don't have secret aneurysms lurking about. You're welcome.