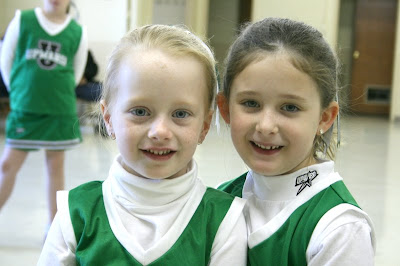 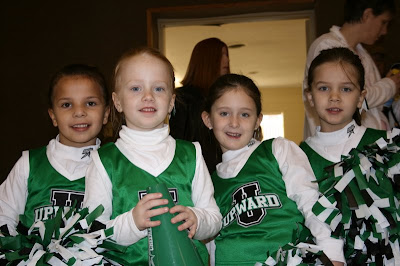 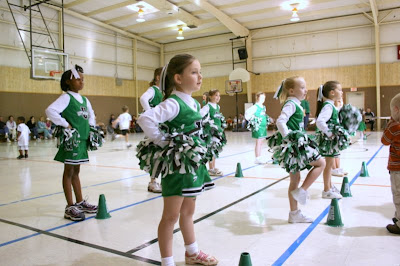 Cheerleading has never been on Jaina's list of "something I want to try one day", but all it took was finding out that her best friend from school, Ashlan, was going to be cheering for Upward this season to convince Jaina to give it a go.

We've already had one positive experience with the Upward Organization. Jaina really enjoyed learning how to play soccer with the Upward group last Fall. I am hoping that Jaina will go on to play even more seasons with soccer since she seemed to like it so much.

So, we signed up for cheerleading before Christmas and went to our first practice right before the holidays. It was pure chaos. 44 little girls and only two coaches that showed up. There were girls hat were missing their assigned uniforms, and uniforms without girls to claim them. And, of course, 4 squads without leaders. Our cheer coach stepped up and organized the humongous group as best she could and tried to work out the kinks with the head of the organization. But unfortunately, we didn't get to actually practice that night.

We then had another practice the next week that was a little less chaotic. But still, the room we were to practice in was locked, no one had a key, a few coaches STILL didn't show up (we found out yesterday one of the coaches was very sick with mono the whole time!) and so we crammed all 44 girls back into another room and attempted to teach them all 2 cheers at the same time.

Then we took two weeks off for Christmas and New years :)

Back to reality this past week... only Jaina was sick with a stomach virus on Tuesday night, so no practice for her. This is when panic set in because they learned 3 more cheers! And their first game was just days away!

Ashlan and her mom came to the rescue :) Jaina spent the night with them on Friday night and they taught her everything she needed to know.

The whole squad was amazing the next day!! Some of these girls, including Jaina, had never cheered before. The ages range from 5-9, but the majority of our squad is 6 year olds. They did such a great job! Everyone stayed together for the most part and they all knew the cheers well! Every single girl showed up on time, too. It was so fun to watch!

After it was over Jaina said, "I didn't really like everyone watching us." to which I assured her, "Hon, everyone was watching the basketball games, don't worry!" and that seemed to make her feel better. She still says she likes soccer better :)
Email Post