We needed a snow day!

My kids haven't attended school since last Thursday and its been wonderful having them home! Friday was a teacher workday (although her teacher admitted that they had already made up the time and weren't required to be at school, either), and we hung out with our friends the Beals and also our friends, the Brittons. Saturday and Sunday were spent in Tucker, GA, visiting my dad and stepmom. Monday (Martin Luther King Day) was unfortunately spent in our car trying to make it home before dark. So none of us were really looking forward to going back to our regular school schedules on Tuesday.

Thank goodness it was a snow day!

Now, when I say "Snow", what I really mean is less than one inch of icy precipitation that may or may not stick. Definitely not enough to close school in any state north of the Mason-Dixon line. However, I do understand why they close schools with just a dusting of snow. Our area is prone to icy conditions on the roads. We have a lot of country back roads that are shaded by trees. And since it rained yesterday in some parts before the freeze hit, most of the roads here are covered with a thin layer of ice. Since our area isn't used to winter weather, we don't have such things as snow plows or enough machines to salt the roads in the county. Add some very inexperienced southern drivers and all you get is bedlam.

When we first woke up this morning, we were dismayed to see that our district was on a two-hour delay. Which made no sense to me, since its already 10 AM and the temp is still below freezing. I can understand delays if the ice actually melts, but not on days that the temps are so low.

Brian went ahead into work. He always does this, even when he couldn't get his little car up the big hill in our old neighborhood. He walked the 1.5 miles to work then. Now that we live 11 miles from his company, we were secretly hoping he'd stay home with us today, but alas, his car made it out of our new neighborhood. Barely. It took him 45 minutes to get to work. He then cautioned me NOT to take the kids to school. By then, the school district had wised up and canceled school!!

Here are some pictures :) 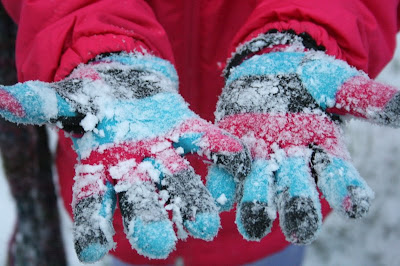 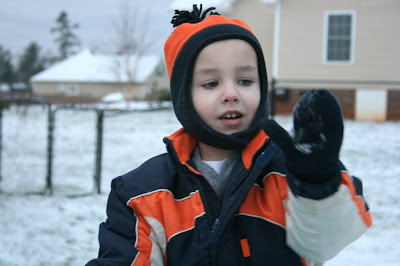 Jaina was determined to make a snow angel. She had to go up on the deck because it was the area that got the most snow! 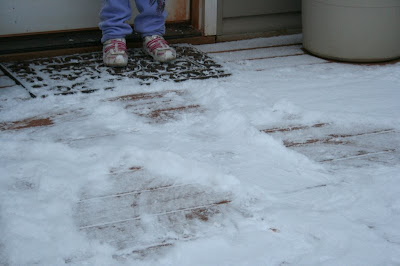 Taking time out for a hug and kiss: 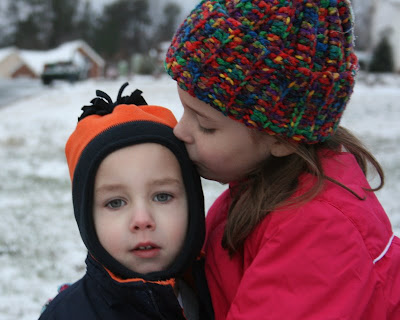 Its more fun than sand, its a SNOW CASTLE! 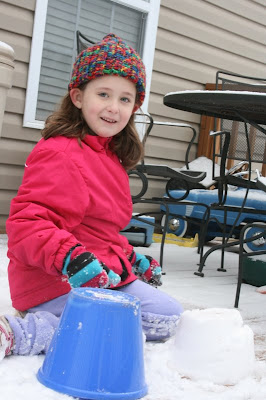