Brian's favorite spot to park on the beach is near the public lot access on the South side of Pawley's. The kids rushed right down to the ocean happily leaving Brian and me to deal with the blanket, the chairs, the buckets, the boogie boards, the cooler, and my camera. Why can we not seem to travel lightly? 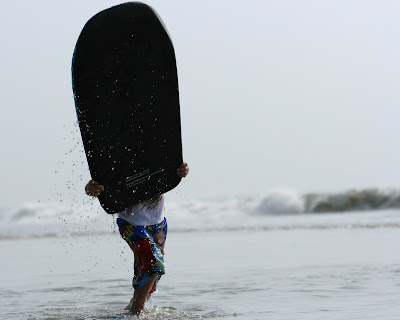 The boogie boards were new; freshly purchased the night before from the expensive touristy Walgreens on the corner. I asked Brian what he was thinking? They'd use them for two seconds and then be done. "Yep, and then you and I can use them instead." Oh! Why didn't I think of that? 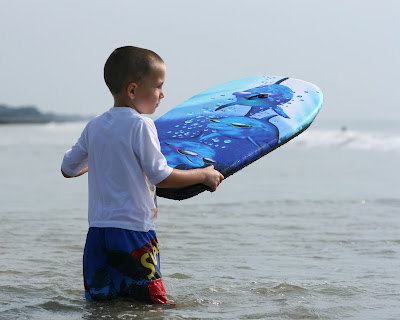 Both kids gave the boogie boards a valiant effort. But Jayce was too scared to stay on and Jaina got dragged under a wave on hers, so Brian and I were able to take possession very soon :) Pictures of Brian to come later. 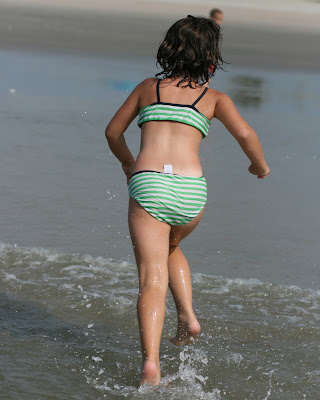 Jaina could not WAIT to get to the beach in order to wear her new bikini. Now, I've never bought a bikini for Jaina before... I'm fine with two-pieces and tankinis and all those, but bikinis seem "older" to me and I'm not in any hurry for Jaina to grow up and desire to show off her tummy. So, why did I relax my stance just this once? It was from Gymboree and it was cheap. I hope she truly enjoys it this summer. Its probably her last bikini until she's 18 and buys them herself :) 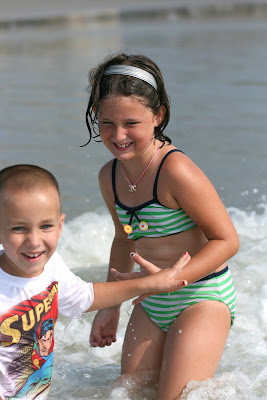 One of my favorite photos of the beach trip :) Sorry for the composition where I almost cut Jayce off completely! I was focused on Jaina and Jayce just happened to come up next to her. I didn't take time to re-compose, but I'm so glad I shot it anyway to get those expressions :)

I had been enjoying Jaina's boogie board immensely since the waves were perfect for it. One wave was a bit too big and I ended up getting dragged under. No problem, everyone gets a little saltwater in their lungs at the beach :)


Then I realized I didn't have my sunglasses. My brand new sunglasses. That I purchased the night before at Walgreens. The ones that I believed would quickly become my favorite new sunglasses. (Yes, I fully admit I buy cheap sunglasses, not designer ones!)

They were $15! That's expensive in my book. I normally only spend $4 or $5 on clearance at Walmart or Target. I was splurging because of vacation.

And now my sunglasses were in the ocean somewhere. That is definitely not doing my part to keep our oceans in tact :(

I made the mistake of telling Jaina. Who immediately became very concerned about my feelings. She's such a sweetheart sometimes :) I know she was thinking, "I would be freaking out right now if I lost something as important as my brand new sunglasses. Thank goodness I still have my brand new headband...."

Then she reached for the top of her head and discovered she's not the only one that lost something.

And then the tears came. 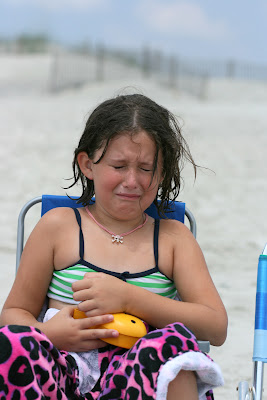 Although it was new, that head band quickly had become Jaina's favorite. I think its kind of cute and funny how much she loves headbands. I did, too, at her age. I still remember some of my favorite ones and can tell you when they broke. I still have some of my old ones, too! I can't stand them now, they give me a headache.

So, Jaina's bawling. Absolutely bawling. I explain that its no big deal, we can get new sunglasses and headbands at the store. It was not the end of the world.

Jayce wasn't sure at first why we were crying. When I asked him he said, "Because Jaina is crying!" 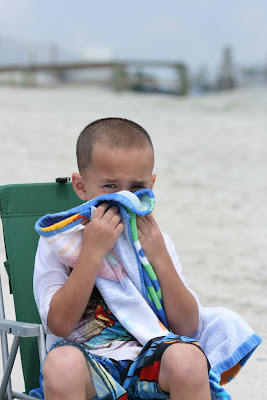 When he found out why Jaina was crying, he cried even harder. 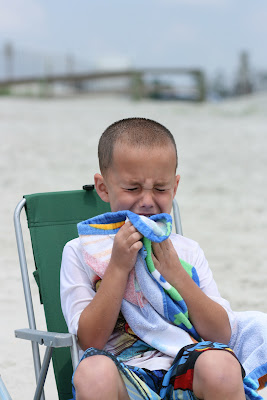 "When is the ocean going to give Jaina back her headband??"

Um, its not sweetie.

Cause the waves take it out to the deep end.

"You can swim in the deep end! You are tall! Go get them mommy!"

I tried to distract him to no avail. He cried for a solid 45 minutes about our lost items. And, we discovered that Jayce lost his purple sifter in the ocean, too. That did not help things.

So, our first beach experience of the summer didn't go as well as we planned. But I am happy to tell you I got new sunglasses ($10 this time!) and Jaina got a new headband, and life is okay now :)
Email Post
Labels: pawleys