So, I took Jayce to the Pediatric Neurologist today. The appointment was scheduled originally because we couldn't get into the Developmental Pediatrician's office until next year (yes, I said year. Like in 12 months from now) and our family doctor felt like he needed to be seen sooner than that.

Jayce has had a rough summer, to put it mildly. Just when you think things are going well with this whole autism thing, something comes along to remind you that this truly is a roller coaster ride.

His anxiety about thunderstorms and bees is worse. He can't seem to make choices or decisions without meltdowns. He's shown aggression to me and his sisters. His impulsiveness is at an all-time high. He's difficult to motivate. He can't multi-task or follow two step directions any more without getting distracted. And, most recently, he's shown some signs of depression.

I want my boy to be happy. That's all any mother ever wants for her children.

Jayce isn't happy. He says he feels uncomfortable in his body. He says self-depreciating things about himself. He spends his days pushing boundaries and limits and arguing about rules. He's done some things to alienate his close friends. His personality is clashing with Brian. In fact, sometimes I think they try to out-annoy one an other. I find myself spending my days giving him warnings, reminders, and consequences. There's very little opportunity to reinforce positive behavior with rewards.

The Neurologist patiently listened to all my concerns. Then she asked a bunch of questions. She was able to observe Jayce (who was in hyper active annoying mode today) for 1.5 hours.

We left the appointment with yet another diagnosis. More initials to add to his alphabet soup of labels.

Gilles de la Tourette syndrome (Tourette Syndrome or TS) is a neurological disorder which becomes evident in early childhood or adolescence before the age of 18 years.  Tourette syndrome is defined by multiple motor and vocal tics lasting for more than one year.  The first symptoms usually are involuntary movements (tics) of the face, arms, limbs or trunk.  These tics are frequent, repetitive and rapid.  The most common first symptom is a facial tic (eye blink, nose twitch, grimace), and is replaced or added to by other tics of the neck, trunk, and limbs.
These involuntary (outside the patient's control) tics may also be complicated, involving the entire body, such as kicking and stamping. Many persons report what are described as premonitory urges -- the urge to perform a motor activity. Other symptoms such as touching, repetitive thoughts and movements and compulsions can occur.


We first noticed that Jayce had a tic, rather than a stim (self-stimulatory behavior), right before Christmas, about the time he started basketball practice. The tic continued to get worse until it peaked in April, then it appeared less and less. Its taken us this long to get seen by someone about it. After speaking to the neurologist about the differences between tics and stims, its evident that Jayce has had many tics for several years. We've just thought they were stims related to his autism.

So, along with ASD, SPD, ADHD, and possibly OCD, ODD, and APD (He still needs to be evaluated for those!), he now can add TS.

When asked, Jayce was very interested in trying medication for his tics. It might not make them go away, but research has shown that a reduction in severity is possible. As a side benefit, the medicine might help his hyper activity a bit. That'd be a huge benefit right now, I'm not gonna lie...

Despite any an all labels, Jayce is still my Jayce. 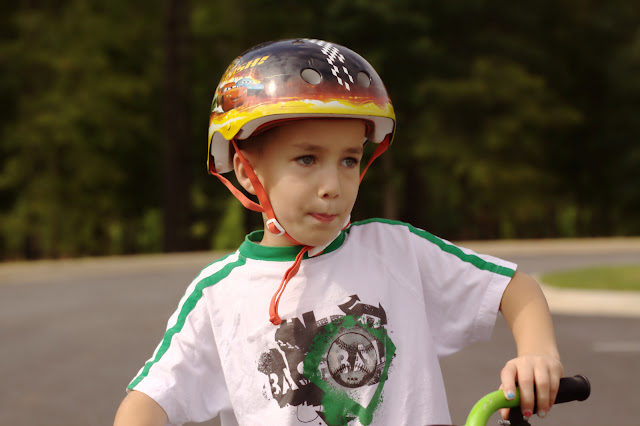