Little Update on me 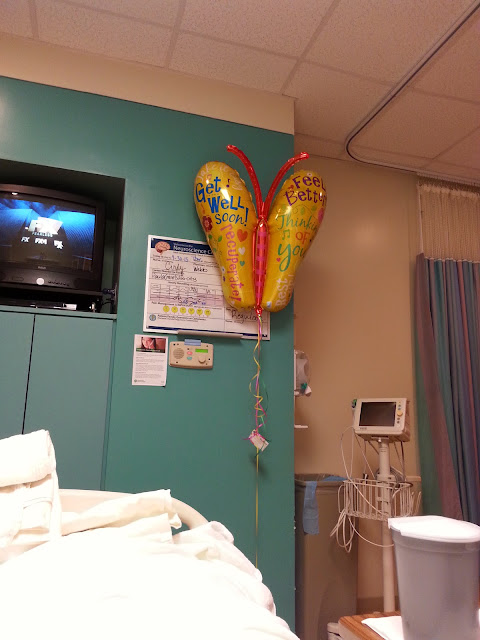 So, it appears that my aneurysm stuff isn't completely over.  I had a follow up CTa (CT with contrast) scan on Wednesday morning just to double check that the coils and pipeline were all good in there. 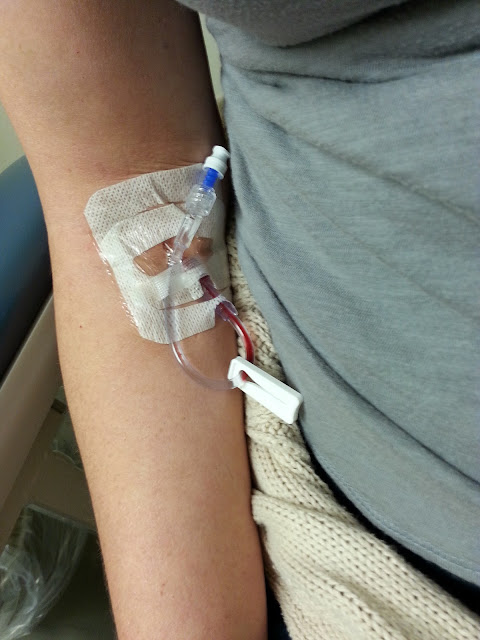 As always, my veins weren't cooperating. It took a special IV team to come find one this time. Bob is my new friend. He was able to get it on his first try after others' many failed attempts. The needle to put the contrast in has to be 18-20 gauge so its rather large for my tiny greedy veins. But we got it!

The CT scan was quick. I chatted with Josh, Alan, and Kim before and after. Josh asked me, "Are you SURE you don't have any more procedures today?" before removing my IV. As far as I knew, I was good to go.

Jocelyn was upset that I was at the "doctor's office" without her (I didn't want to tell her I was going to the hospital for the test) so I promised her McDonald's lunch on my way home. I even got her the coveted Fluttershy My Little Pony in her happy meal that she's been wanting for weeks.

I arrived home around 11:00 AM from my 9:00 AM CT scan. Not only did it take a long time to start an IV, but we also live 45 minutes from this particular hospital.

Around 11:45, the land line rang. I looked at Brian, who had worked from home that morning to watch Jocelyn, and joked, "I bet that's the hospital saying there's something wrong with my CT scan."

Unfortunately, it wasn't a joke. The nurse said my doctor saw "something concerning" and can I possibly meet Dr. Webb in the ER as soon as possible? That was all the details I had.

Talk about concerning. Normally I'm not one to panic, but I started to panic on the way to the hospital. Was my aneurysm about to burst? Did they find another one? All I could think of was that I'd need surgery again. And after my horrible recovery in March, that was the last thing I wanted.

By the time Brian pulled the car into the hospital parking lot, I was a mess. I felt like I was going to throw up. My hands were numb. I was afraid I was going to pass out. My BP was 135/90. I think that may be the highest my BP has ever been!

At first the ER had no idea what to do with me since no one knew why my doctor had ordered me back there. But soon Melissa, the NP and Dr. Webb's right hand partner, walked through the door. She told them I was summoned for a possible thrombosis in my aneurysm stent (really, its a pipeline which is different than a stent, but since pipeline flow divertors are a new device, no one really knows what you are talking about when you say pipeline). As soon as the word "Blood clot" was thrown around, I was taken back to the ER rooms immediately. Dr. Webb met Melissa back there and explained that I had very poor blood flow on my CT scan and they also thought they saw a possible blood clot. However, since I was walking and talking and feeling fine (funny how the panic goes away as soon as you know exactly what's wrong), they didn't think I was in any emergent danger. But she was going to have to do an Angiogram to see what we were dealing with.

"Believe me, I do NOT want to do an angiogram on you. Especially after what happened in January. And your hemorrhage last month. But, I've got to.

They scheduled the invasive test for 8 AM the next morning. Since all the hospital rooms in Neuro ICU and on the regular Neuroscience/Stroke floor were completely filled up, I spent the majority of the time in the ER curtained "rooms". I had to have a space where they could hook me up to a heart monitor so I beat out car accident victims for a room while they had to remain in the hallway. It was kind of surreal. I didn't *feel* sick. I didn't even have a headache that day.

From my vantage point in my room, I saw lots of interesting ER patients. The aforementioned car accident victim was a pretty blond teen who managed to flip her car over without the help of any other car or collision. When her mom arrived, she was none too happy. Supposedly her daughter had done the same thing last year with the mom's suburban. Her head CT and spinal exam checked out, so she got sent home.

There was also a guy that came in with one eye almost swollen shut. He said his allergies had been bothering him, but now he couldn't even see out of his eye. The ER doc and eye specialist diagnosed him with an infection and gave him antibiotic drops and told him to put a hot compress on it three times a day.

I also saw a male teen with facial abrasions from a car accident. Then there was a college student aged female with a broken arm. And this was all without leaving my bed. I saw a ton of paramedics bring people in and pass my room but who knows what was wrong with their patients. They were very busy in the ER, that's for sure!

I was left alone by the most part. Brian bought me dinner before heading home to feed the kids and relieve my mom from kid duty. I was woken up at 1:30 AM. Rumor has it that Dr. Webb moved a patient from the neuroscience/stroke floor so I'd have a room there. At 1:30 in the morning :P

Earlier that evening, Brian made the off-hand comment that he'd love to trade places with me and have a "vacation". Yeah, 'cause being in the hospital with bad cable TV and nurses checking your vitals every 2 hours is certainly MY idea of a vacation. Who here agrees that he needs to send me off for a weekend at a spa soon?

The angiogram the next morning went well. They were able to insert an angio seal (Thank goodness!) so I didn't have to have physical pressure applied to stop the femoral artery from bleeding. The procedure went smoothly and they did find a small blood clot. However, it was the best case scenario. The blood clot was at the bottom of the pipeline but the pipeline was still filling with blood from the top. All the important areas of my brain were getting adequate blood flow.  Dr. Webb changed my blood thinner/anticoagulant medication from Plavix to Brilinta in order to dissolve the clot. All should be well soon :)

So, now I'm home, again, with the same restrictions that I've had twice already this year. No stairs, no baths, no lifting over 10 pounds. It doesn't sound like much, but when you have a 30 lb three year old who doesn't understand why Mommy can't pick her up or take her upstairs to play, it makes it that much more difficult. But we'll survive :) We've been through this twice before already. :)