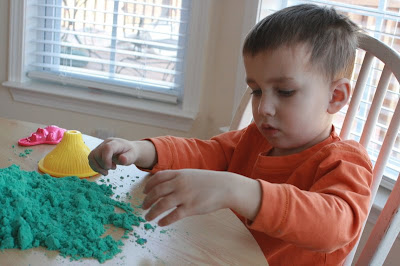 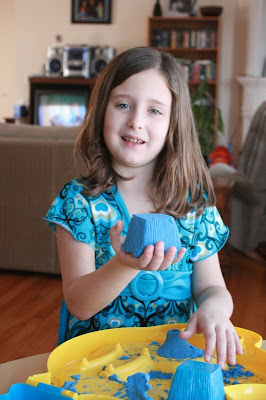 I'm sure if you are a mommy and you read my blog, Moon sand is old news to you. You've already developed a great dislike for the messy stuff, probably a direct correlation to how much your kids love it :)

If you are one of the few blog readers that don't have the pleasure (or challenge) of having two legged babies (as opposed to 4 legged fur babies) then you might not realize what Moon Sand is exactly. Think of sand. Think of colored playdoh. Now mix them together. And slap on a claim that the stuff never dries out, and you've got Moon Sand.

My son Jayce has been diagnosed with Sensory Integration Dysfunction (also known as Sensory Processing Disorder) even before he received his diagnosis of autism. I'm pretty new to the whole sensory issue thing, so I was pretty clueless at why Jayce wanted to stay home all day, stopped eating anything but pancakes, and screamed constantly. Looking back now, it was most likely related to sensory problems. Jayce couldn't handle the cacophony of noises the outside world brought to him. He freaked out at the sound of the blender, vacuum, or garbage disposal. He couldn't eat anything that looked or smelled or tasted "funny" to him. It would literally make him gag. And the poor boy probably felt so gravitationally insecure, which paired with his speech delay so he couldn't even tell us he felt bad, its no wonder why he screamed all the time.

Jayce receives Occupational Therapy for his sensory issues and wow.... I cannot even begin to tell you how helpful it is. He has been a different kid ever since finding the right therapist to work with him. Play-doh has long since been a therapy tool from day one. At first, Jayce cried when he saw the tub. Then he would tantrum uncontrollably when it was taken out of the tub. The first time it touched his skin, I thought we had scarred him for life! Then, a few weeks later, he would touch the stuff just to get it off the table and back into the tub. Then a few months later, he was using a stamp to make a Spiderman logo in the play-doh, all the while relieved that he did not have to touch it at all!

Jayce has been in therapy for over 18 months now and play-doh is one of his favorite things to play with. So we've since branched out and include play sand, floam, silly putty, and moon sand in our repertoire. Who has sensory issues with play-doh? Not Jayce any more :)
Email Post