Jayce Therapy Update plus hilarious outtakes of him :)

Jayce is involved with so many therapy programs right now, I think my mind might explode just thinking about everything he's working on! And if this is how I feel, there's no telling what Jayce thinks of all this!

Actually, all indications point to Jayce loving therapy. He doesn't always want to work, but he loves having constant structure and one-on-one attention for 4 hours a day. He's also pretty easy to motivate. All you have to do is dangle "Screen Time" in front of him and he'll jump through hoops to get to play Wii or DSi or watch TV.

One downside of our new therapy schedule seems to be Jayce's dependence on his therapists and therapy settings. When we don't have a session going on, Jayce has no clue what to do with himself. Unless I give him a video game, then he's good for several hours :) Here's where Jaina has been coming in to save the day. From about 5 PM until after dinner, she enjoys playing with her little brother. She gets to boss him around and dress him up. He gets more one-on-one instructed play. Its a win-win :)

And lucky for us, he has no problem wearing Jaina's clothes and being called "Sophie". Jayce knows the biological differences between genders and also knows how important it is to use the proper public restroom depending on your gender, but beyond that, he has no clue that society has placed social norms on gender specific items and activities. And there's really no reason to tell him right now. Cause he makes a really cute boy in a dress :) 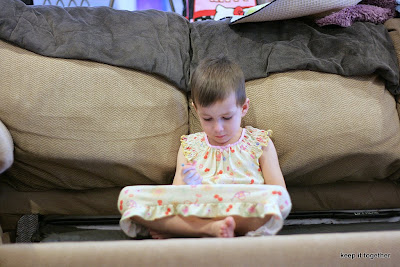 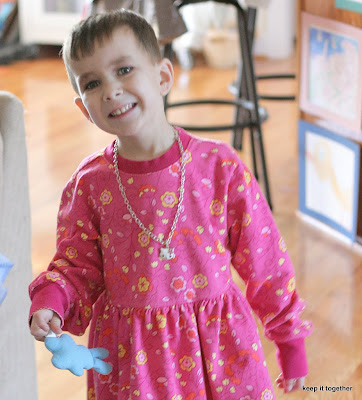 I think we'd better work on getting Jaina a little sister, don't you think?
Anyway, moving right along... this post will end up being lengthy if I'm just now starting to talk about all his therapies!
OT at the hospital: His sessions have only been once a month since November 2009. We were actually going to discharge in January if he continued to meet all his goals and nothing new cropped up. Well, his therapist thinks he could benefit from going 2x a month again. We've seen some regression with some fine motor skills (pincher grasp, letter writing is now backwards for no reason) and also some visual stims/tics. This prompted her to track his vision. Jayce cannot track a light across his midline. He used to have a problem using his hands across his midline, but now its his vision. I don't know if he's always had this problem and we are now just discovering it, or if its new. Anyway, we're gonna work on it. He's also getting audio therapy (aka Listening Therapy) and they are going to start a new therapy protocol that has something to do with astronauts. I'll blog more when I know more.
ST at the hospital: On the surface, Jayce's receptive and expressive language meets developmental requirements for his age. HOWEVER, there's a little thing called pragmatics. Because I'm lazy, you guys are going to get a definition straight from Wikipedia:

Jayce definitely has trouble with pragmatics. Every single therapist sees him having a slight pragmatics problem EXCEPT his school ST. Its now my job to convince her that just because he's made such good progress with expressive language doesn't mean he's having age-appropriate conversations yet. She told me today that she wants to discharge Jayce. Whatever. (insert rolling eyes here).

Feeding Therapy: Feeding, once the area of biggest concern and delay for Jayce, is now his area of biggest gains :) He'll try anything. Now, he may not like it, but he tries it. This is huge! He's eating some fruits, some veggies, some meats, some mixed dinners (casseroles, etc). Instead of eating the same thing for lunch every day, he has about 6-7 options that he rotates with. That's pretty great! His therapist would like to see him add more foods to each category and also to increase his consumption before discharging him. His favorite thing to eat right now? Chef Boyardee. (I'm secretly saying "YUCK!" but not in front of him!)

SLP at Therapy Maps: Go check out what a therapy map is here so I don't have to explain it fully. This post is long enough! Anyway, Kim is such an integral piece to Jayce's therapy puzzle. Some sessions she works on Jayce's play skills, impulsiveness, and attention. Other sessions, she plays speech games with Jayce. Sometimes she gives me advice on how to find solutions to problems we are having at home. Sometimes she talks to me about IEP meetings and SN law and school policies. She is such a fountain of knowledge, I have no idea what we did before she came along. She's my autism  hero :)

ABA: This is the therapy that Jayce is getting 4 hours a day. Want to know what they do for 4 hours a day? In a nutshell, they run through programs with Jayce while they play with him. He thinks its play, but really he's doing a ton of work and catching up on some of his skills that are delayed. Here's a list of his current programs:
-Asking for Information (ex. Jayce likes to come say, "I'm thirsty." Well, that's great, but he needs to ask me for a drink. There are tons of other examples of how Jayce typically makes statements instead of asking for his wants and needs.)
-Cause and Effect this one is pretty self-explanatory. You may think that its easy to say why something happened because of something else, but its not always easy for a child with autism.
-Coloring/Drawing Yes, I know boys typically don't color and draw like little girls like to do, but this is critical to a child's development. Do you remember when your kids used to draw people with one big face and arms and legs sticking out? And then they gradually learn to add bodies and more facial features and other accessories? Well, Jayce can draw a circle. And a triangle. And a rectangle. And a square. But he can't even scribble and pretend he's drawing a picture. I'll have to post some examples for you one day. He also can't color even remotely inside the lines or use more than one color for a picture.
-Describe/Define We give him clues and Jayce has to tell us what we are thinking about. Then Jayce does it back to us. My personal favorite of his describing? Jayce says, "I'm thinking of something white. Its a notebook. And it has paper in it. What is it?" Well, I think it may be a notebook, Jayce :)
Prepositions/directions Again, this is self-explanatory. Jayce is learning what words like "above, below, diagonal, beneath, across, next to" mean.
Personal Pronouns He continually calls boys "she" and girls "he". Like, if he sees Jaina drop her fork on the floor he'll say, "Why did he drop his fork on the floor?" Its starting to become a social problem because he's making other little kids mad that he can't get their gender correct in speech.
Puzzles Jayce learned how to put a 12 piece puzzle together the other week. He learned what pieces have corners and which ones had edges. And to look for like colors. He mastered it in a week. Then he got two new 12 piece puzzles and he can't even begin them himself. This is called having trouble with "generalizing the skill". Thanks Monica, for the puzzles!!
Recalling Events is just what it sounds like. He has to recall events that took place a minute before. Gradually we'll lengthen the time.
Sequencing/order Here he has to put 3 cards in order of activity and say the words "First, next, last" and tell us what's going on in the picture. He memorized the cards very fast so now we have to get new ones!
Self-help/dressing Jayce now has the motor skills to be able to dress and undress himself. But for some reason, he still needs physical and verbal prompts. Its our goal that he'll be able to do it by himself soon.
Following two part instructions like "go to your room and get your blanket". Seems simple enough but he consistently hears the first part and not the second.
Independent play that does not involve an electronic! The therapist will involve him in an activity (like legos) and gradually move away from the scene until he is comfortable playing by himself.
Social games: He's learning Hide and Go Seek, Red Light/Green Light, and Duck Duck Goose. Oh, and tag, too!
MLU/Tact: We want Jayce to use longer sentences in his everyday speech. Instead of "I went to school today." we'd love to hear, "I went to school today and saw Louis" or "I went to school today and played on the playground."

Basically, we have to teach Jayce every little thing. He doesn't naturally just pick it up like most kids. But he's got some really great teachers, wouldn't you agree?

As far as school, all I keep hearing is "He's doing great!" which is awesome, but I'm not getting any other information than that. I'd like to know what he's doing "great" at, you know? And he should be doing great. He's been in the same class with the same teacher for the last 2 school years. He knows what to do, what to expect. That means that Kindergarten might throw him for an absolute loop!

Anyway, here's some funny Jayce expressions caught on camera :) His own little version of "Hilarious Outtakes!" 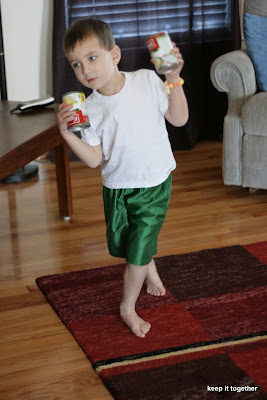 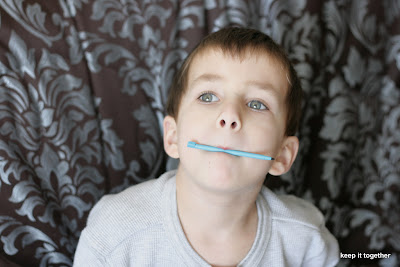 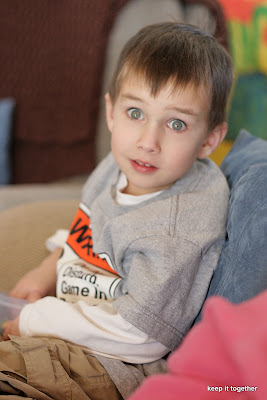 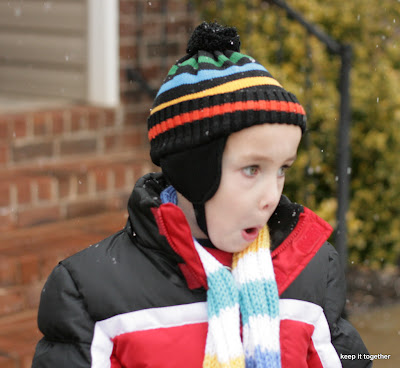 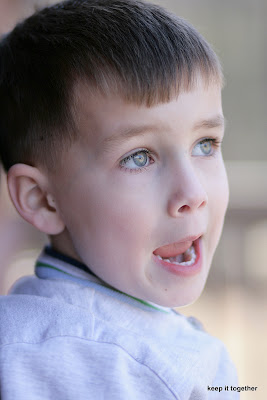 Oh, and one last thing....
If you live in South Carolina, can you please call/write/email your representatives to tell them that you would NOT like the Special Needs/ DDSN proposed budget cut to go through? It would cut services to over 30,000 kids and adults with disabilities. No, I'm not kidding. It almost doesn't seem legal.  But I think its gonna happen anyway. Unless we do something to stop it! Thanks for your help!
Email Post
Labels: ABA feeding therapy OT ST