Honestly, stims aren't a huge problem in the grand scheme of things. I read on a SN forum one time, "No one has ever been injured by a stim" or something like that. When you have a child that is non-verbal or one that engages in self-injurious behavior (where's the abbreviation for that?), a little hand flapping gets ranked pretty low on things to work on.

Before I had Jayce, I was not very knowledgeable about stims. I only thought there were three: hand flapping, toe walking, and rocking back and forth. Ha! Now I know there are verbal stims, visual stims, and that physical stims can be very subtle or seen as a tic.

I also had no idea what caused them. Or why the person felt the need/compulsion to do the behavior. From what I understand, most stimming is related to sensory input some how.

Jayce has had many stims over the last 4 years. Most of them I just ignore. It will pass. The hand flapping does get a verbal correction because it seems to help him in the long run with communication. He pretty much only hand flaps now if he's super excited about something or else sees things in motion. With the excitement thing, if he uses his words to TELL us how excited he is, most often he forgets to use his hands to tell us. With the motion thing, there doesn't seem to be anything we can do about that.

His newest stim, though, bothers me. Its not so much that he looks weird doing it (and I do worry about teasing the older he gets), but its that he's told me that he is very uncomfortable. Its this crazy little shoulder shrug while pulling on his shirt. It looks like he is very uncomfortable in his skin. When I ask him about it, he tells me that nothing hurts, but he can't stop moving his shoulders that way because they are uncomfortable unless he does the motion. It was just an occasional thing a couple of weeks ago. Now he does it all the time.

I don't want him to be uncomfortable :(

His OT suggested that we give him a lot more proprioceptive input. We haven't had to visit a sensory diet in what seems like forever! But as I'm reading this website to re-familiarize myself with appropriate sensory activities, I am realizing that Jayce is having a lot of sensory issues again. Its affecting his ability to focus, his gross motor skills, and his inability to sit still.

We're going to try some sensory activities before moving to a weighted vest or a pressure vest. I know he's only in 1st grade, but I worry about him needing a vest at school and looking different. I know I shouldn't.... just being honest here. 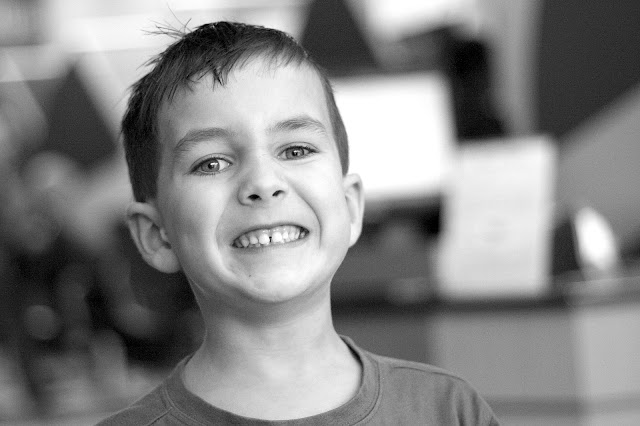 On a completely different topic, the kids received report cards today. I asked Jayce to tell me what his grades were.

I quickly open up his report card to see for myself.

He had straight A's, which is what I was expecting.

"Jayce! You have an A in math! Why did you think you failed?"

Then I see his one fast facts test (sums up to 14) in his blue folder with a 64 on it. It looks like he just ran out of time. The 64 he completed out of 100 were correct. The rest were unfinished due to time constraints. I then had to explain to him what an "average" was and how one little fast facts score wasn't enough to mess his A average up :) Silly boy!

Oh, and no... still no baby. Jayce is determined for me to have a c-section and he can't fathom why this baby does not know that its 40 weeks are up!
Email Post
Labels: autism OT