Are zoos an essential part of endangered animal conservation or just touristy big businesses showcasing unhappy animals in captivity? This question has always weighed heavily on my mind, even as a little girl growing up in Southern Florida and visiting the Miami Zoo. (Which is now called Zoo Miami. Not quite sure why. Does that actually sound better?)

Don't get me wrong... I have great memories of that zoo. I remember riding an elephant with my dad. I remember feeding the giraffes and watching the lions and flamingos. And then there were those great wax toy molds that you could buy at the end of your visit. My mom and I were just talking about those the other day.

I was 11 when we moved to a suburb of Atlanta. The Atlanta Zoo (Which is also called Zoo Atlanta... why?) is awesome. My favorite exhibit is watching the panda bears. My kids have also been to that zoo several times with me and their grandparents. They love the rhinoceros and the red panda walk through. 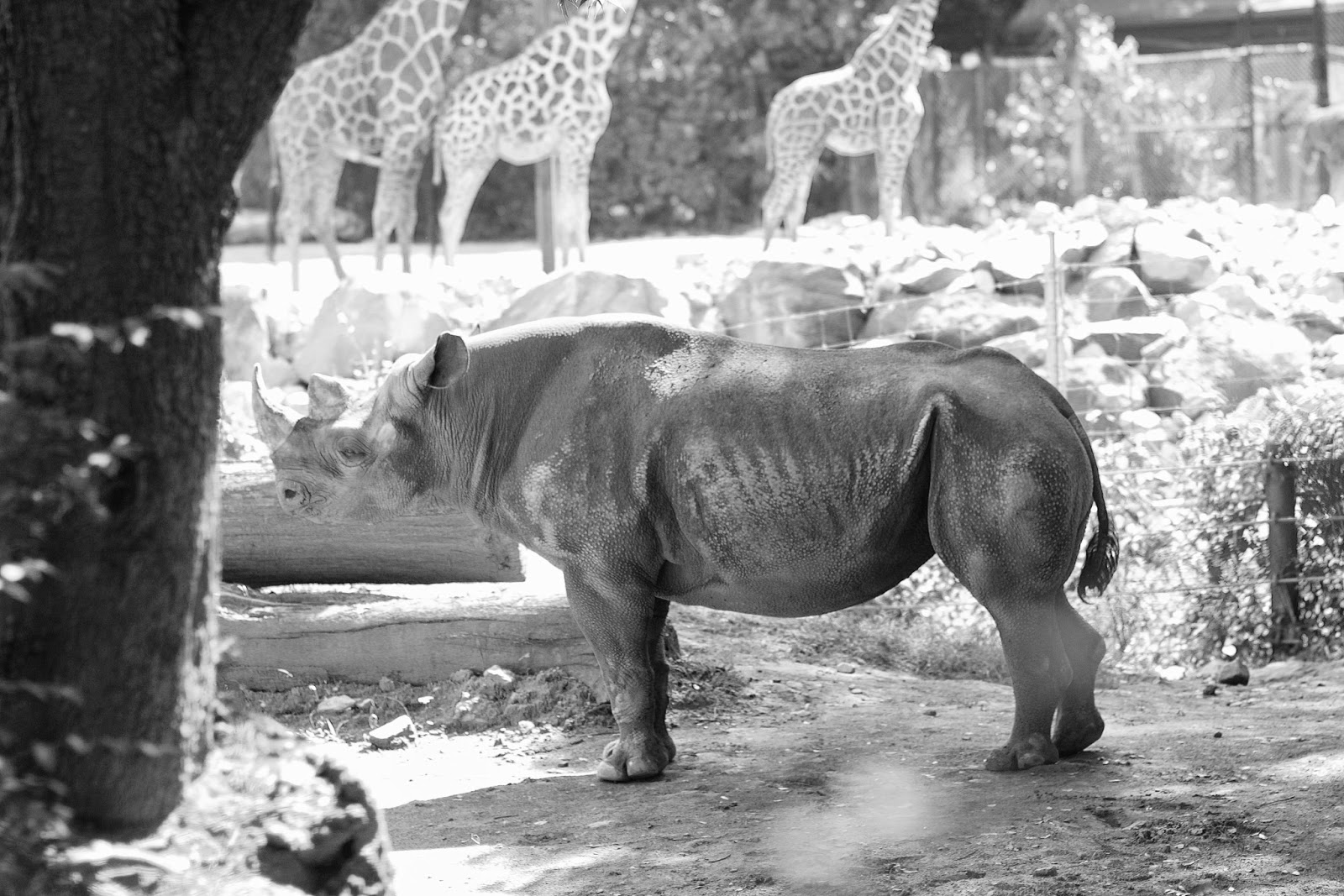 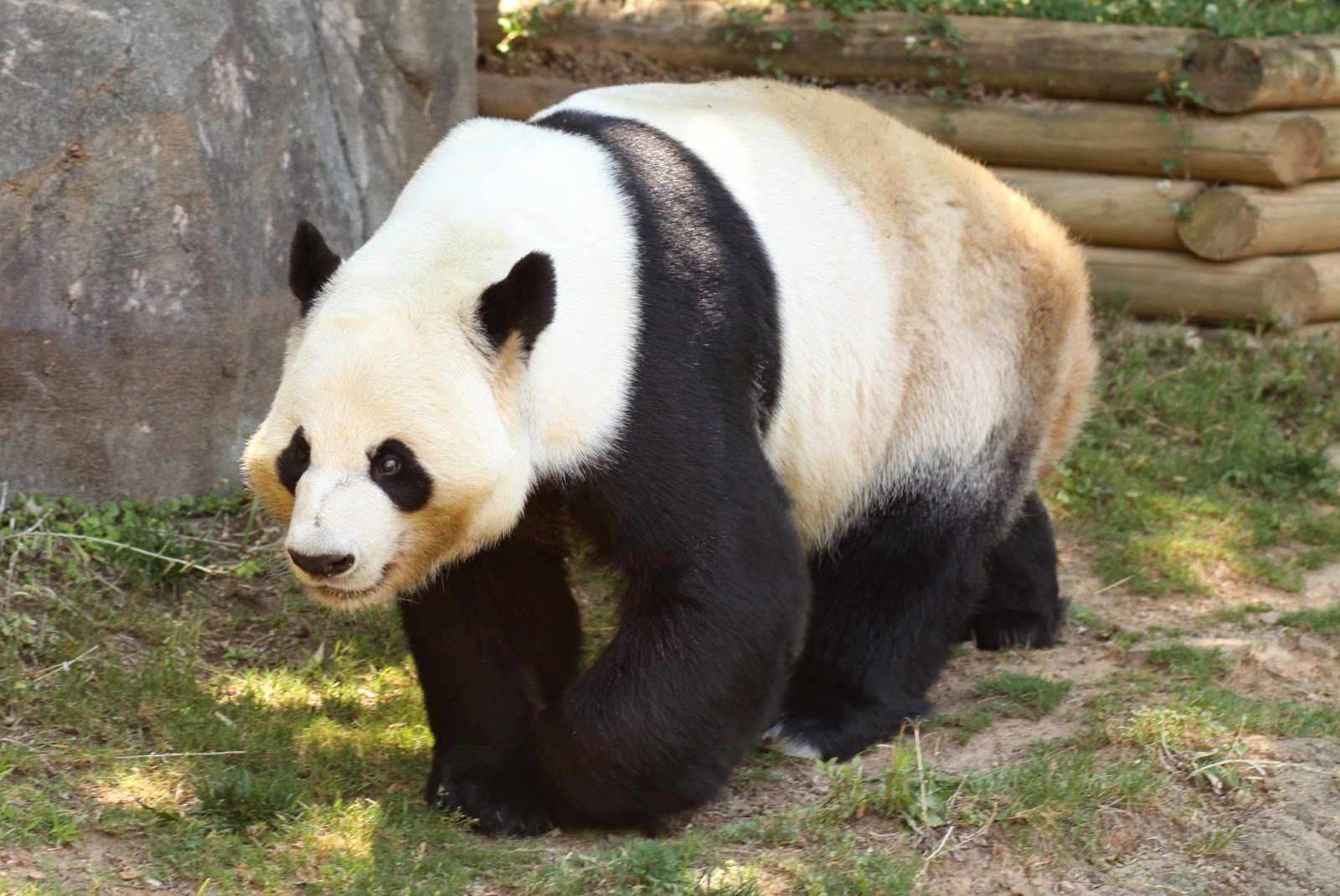 But our zoo here? Well, it just makes me sad. Its very small. I mean, very very small. It doesn't have many large mammals that most zoos have. We miss seeing tigers and rhinos and bears. Now add elephants to that list. Our local zoo was not up to code on the enclosure requirements for housing an elephant herd and there is no room for them to expand. They had to find a home for their lone elephant left, Joy.

Sadly, Joy died during transport to a zoo out west. It may or may not have been because of negligence on the zoo's part. There were some safety precautions that were not taken with her.

The elephant enclosure is now permanently closed. A sign hangs on the fence covering the exhibit in memory of Joy.

We had free passes to the Greenville Zoo (which is not called Zoo Greenville, fyi) this Summer. We've just been patiently waiting for a cool or overcast day. We took advantage of this past week's "polar vortex" to enjoy the zoo in 70 degree temperatures. In July. That's pretty awesome.

This was Jocelyn's first time at the zoo since she was 6 months old. I'd say she enjoyed it way more than 2 years ago :) 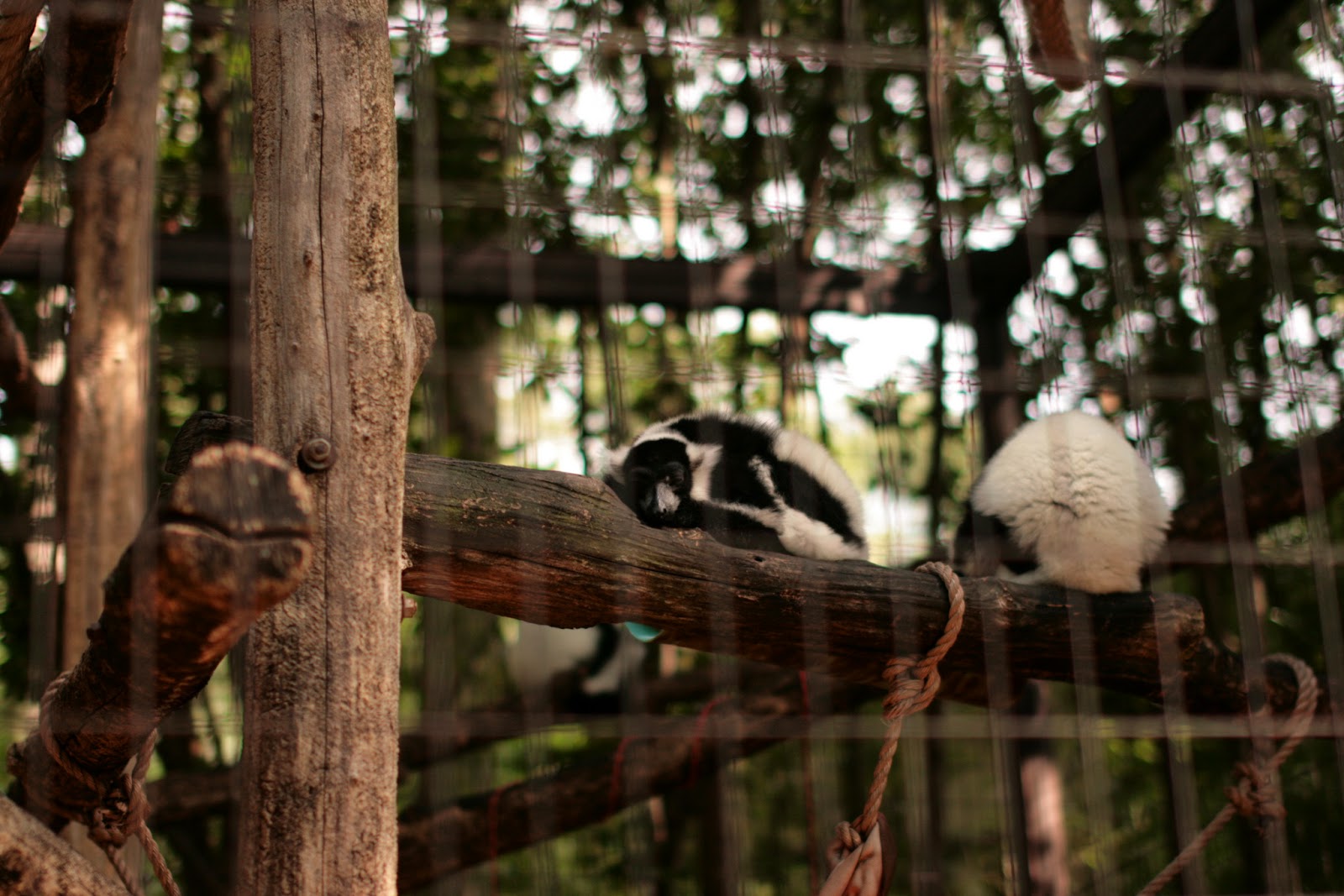 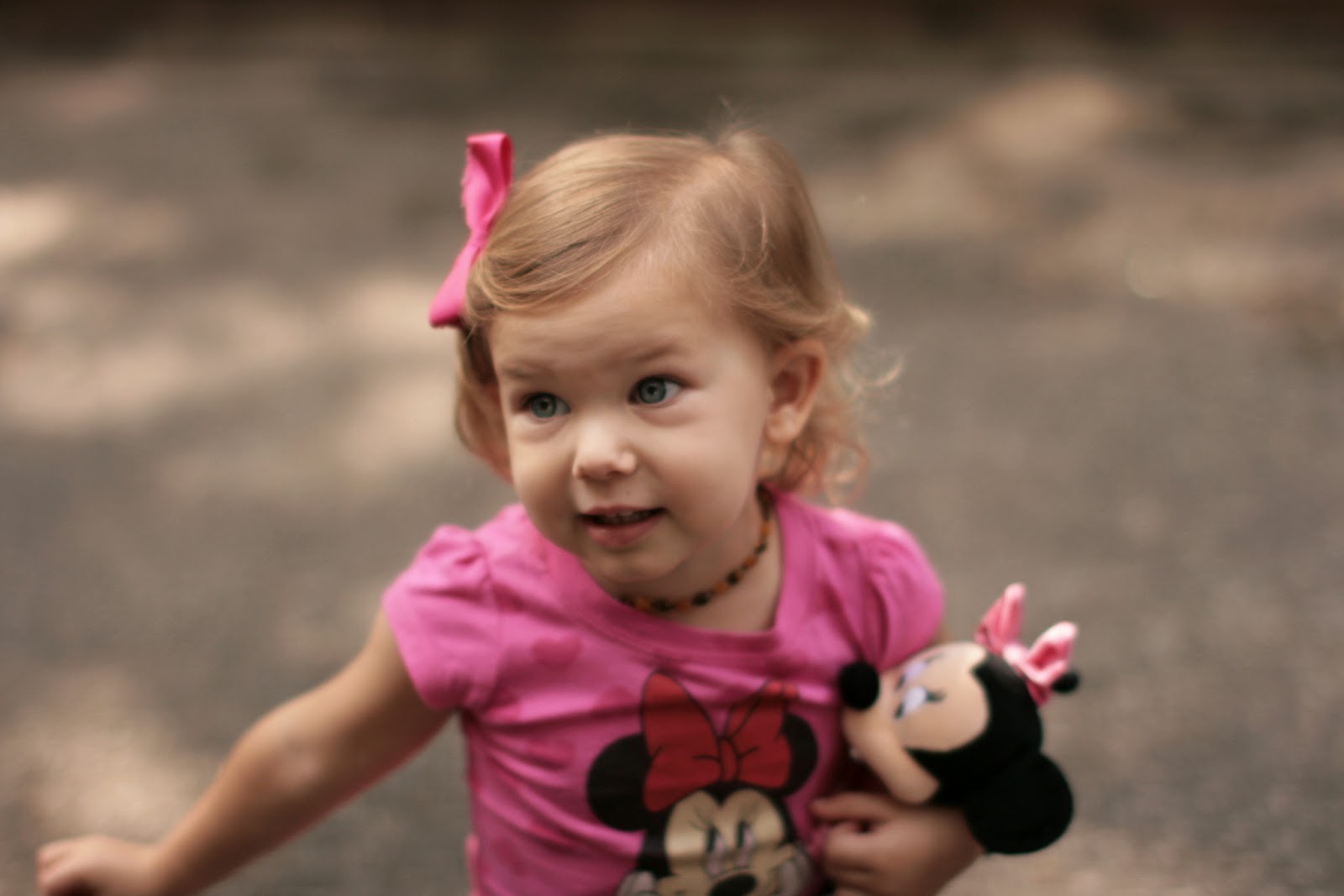 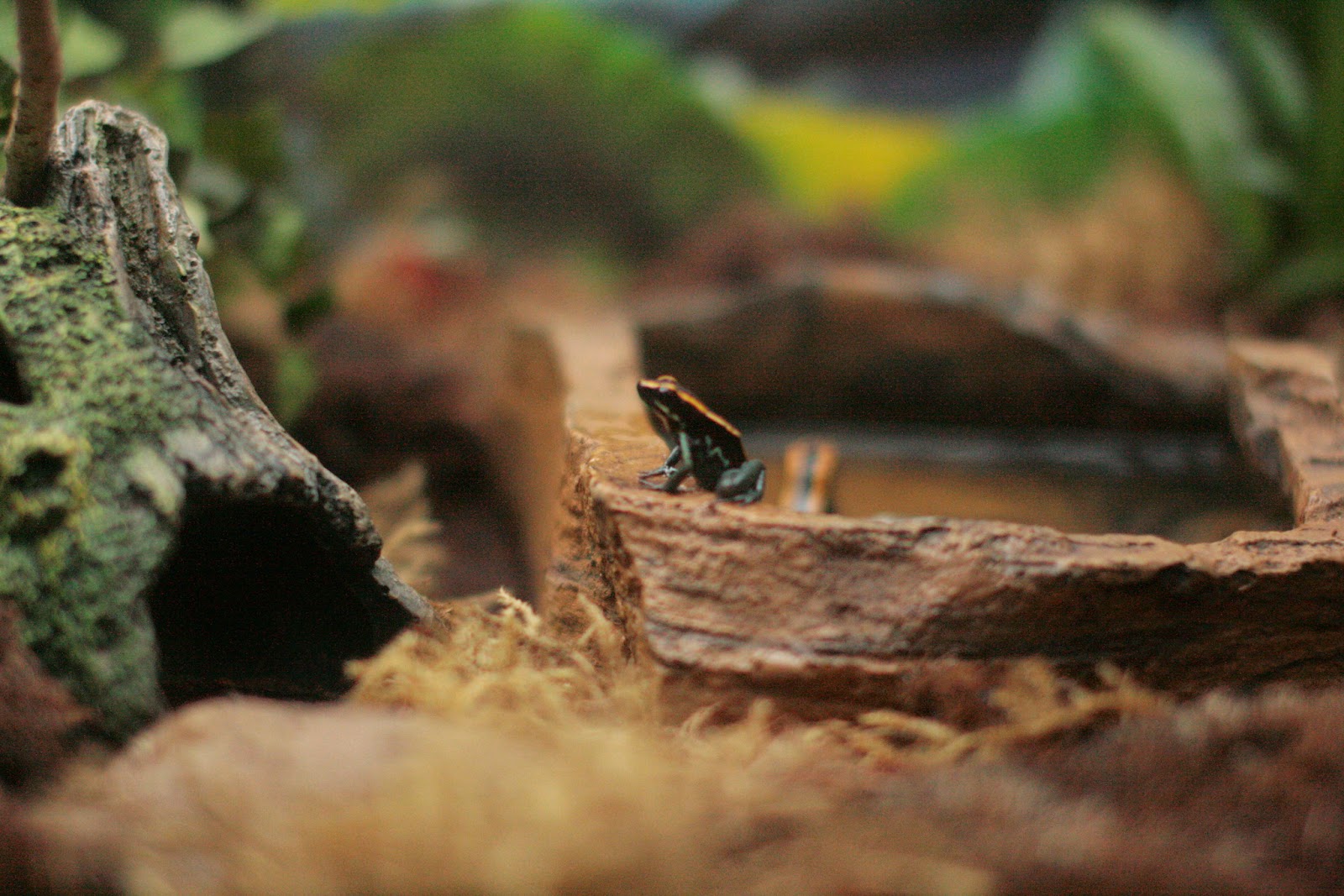 We met our friends Danielle and Becca there, along with their children Logan, Louis, Cassie, and Livvie. Oh, and Minnie Mouse came, too. 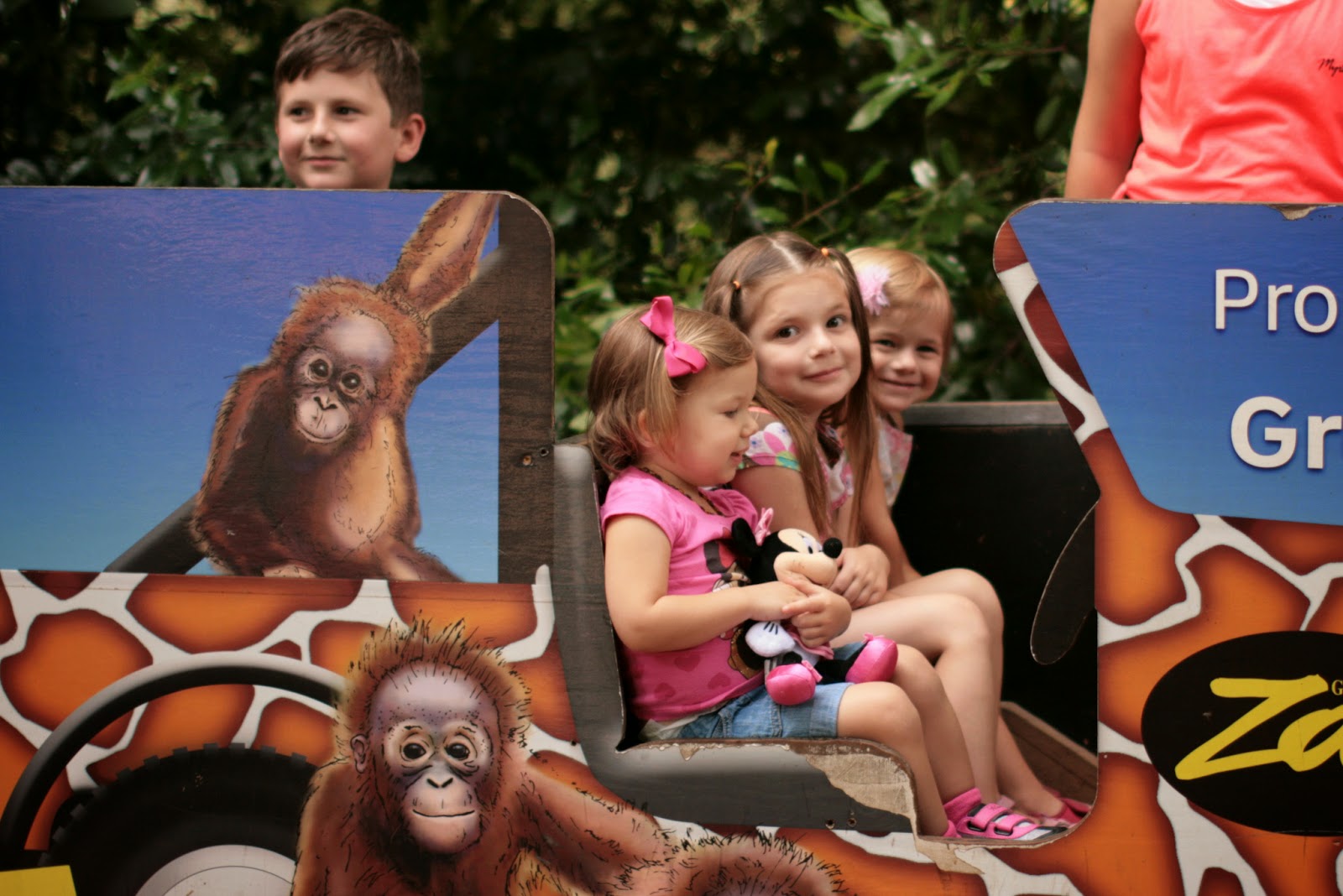 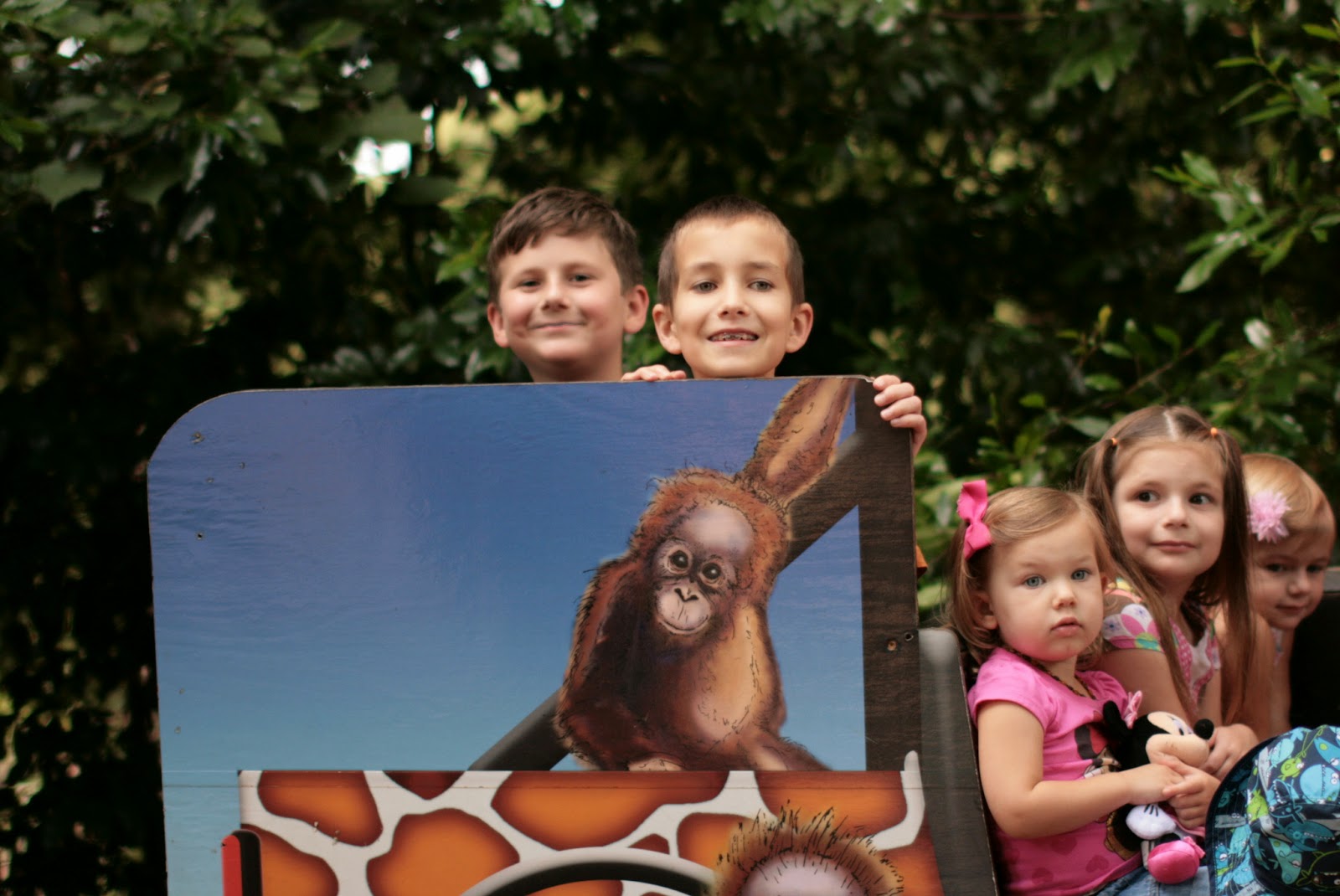 My 50D camera body was in the shop, so these pictures were taken with my Rebel xsi, which is the reason for the poor quality. And I probably should have used my 85 mm lens instead of my 50. Oh well!

The observation glass sorely needs to be replaced. Its scratched and clouded and discolored. I tried moving to the side of the glass and shooting through the wire bars, but I couldn't get close enough to them. 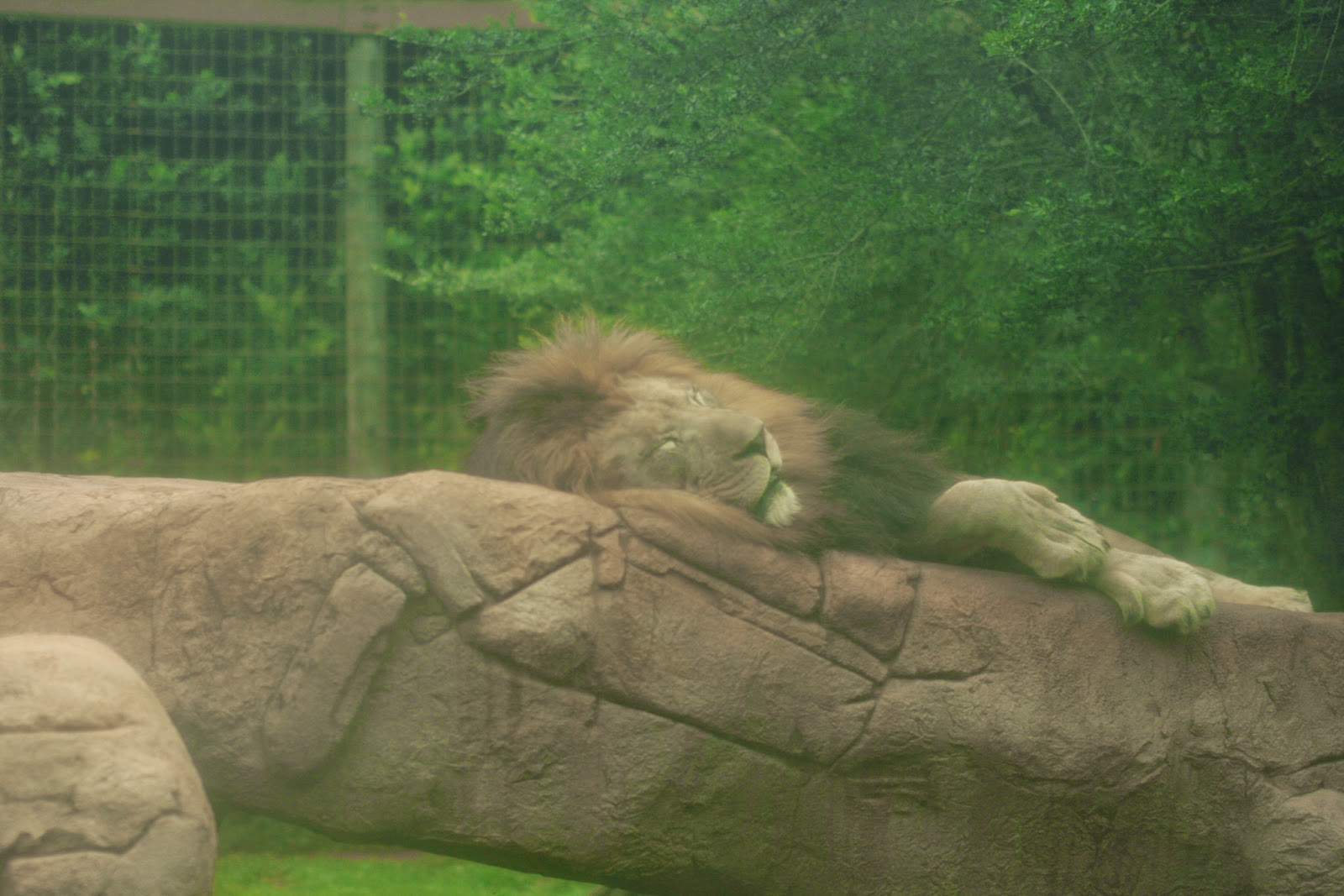 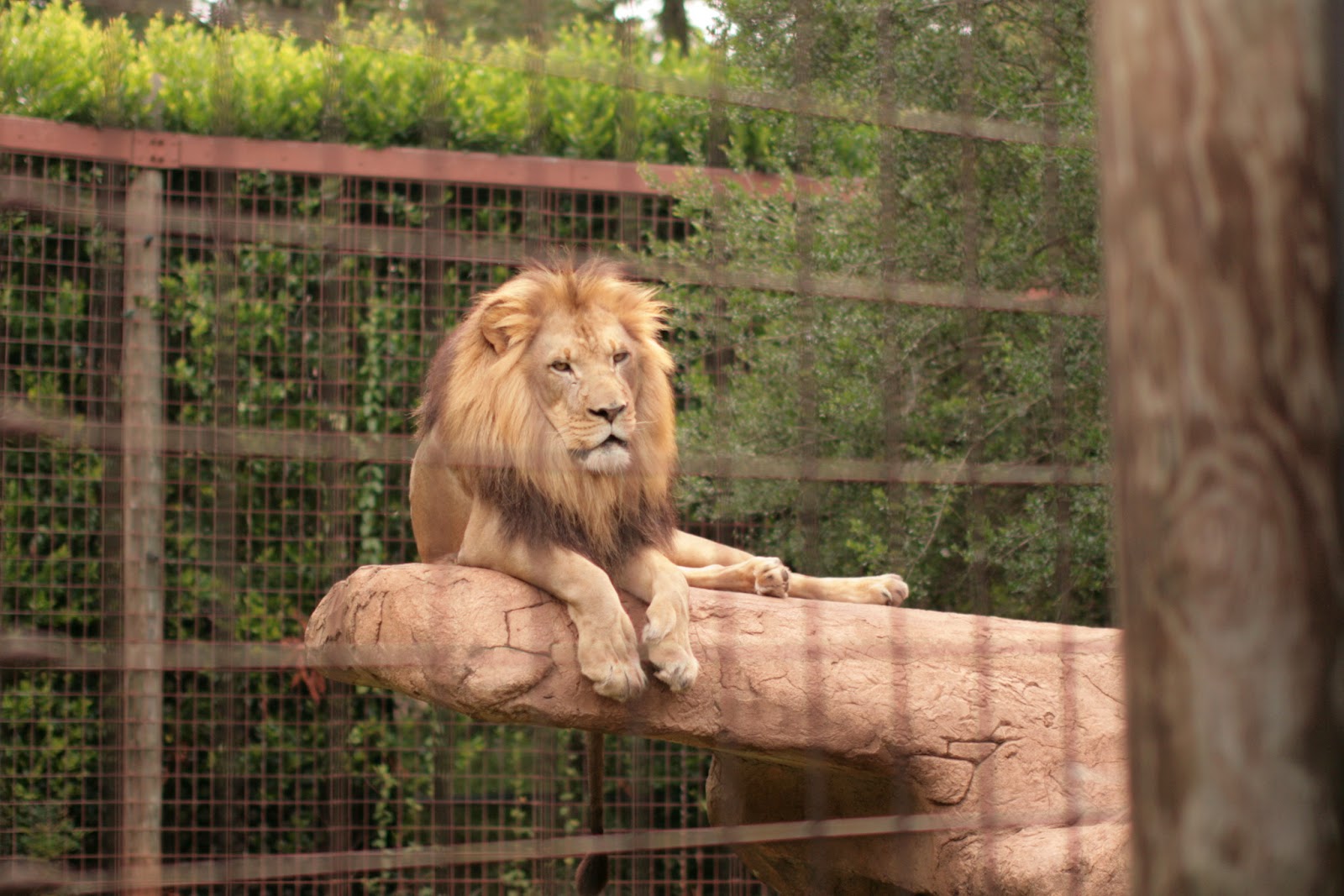 I will definitely bring my 85 mm lens next time. Much better pictures of the lions two years ago!

The giraffes were all outside that day in their enclosure. They are beautiful! 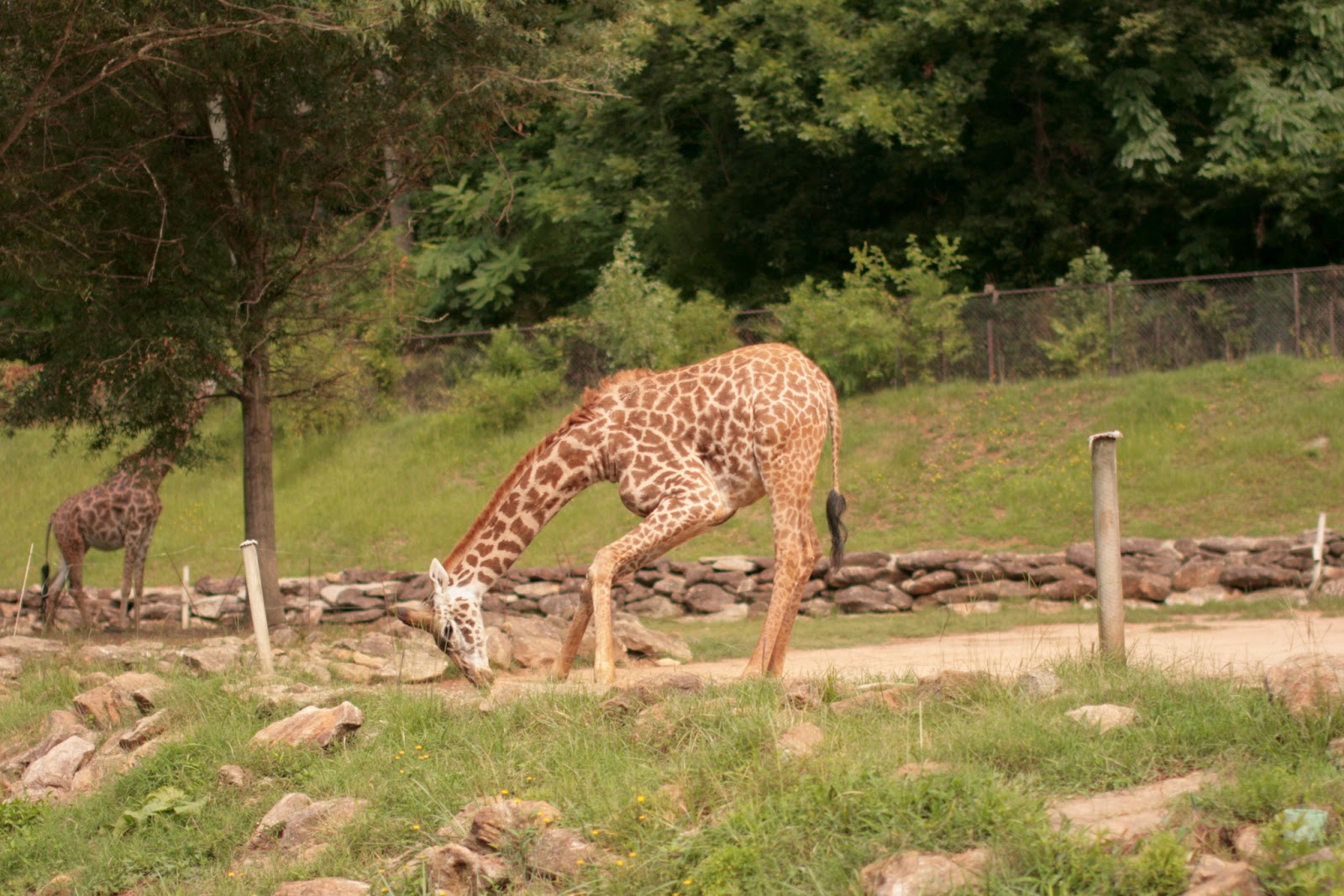 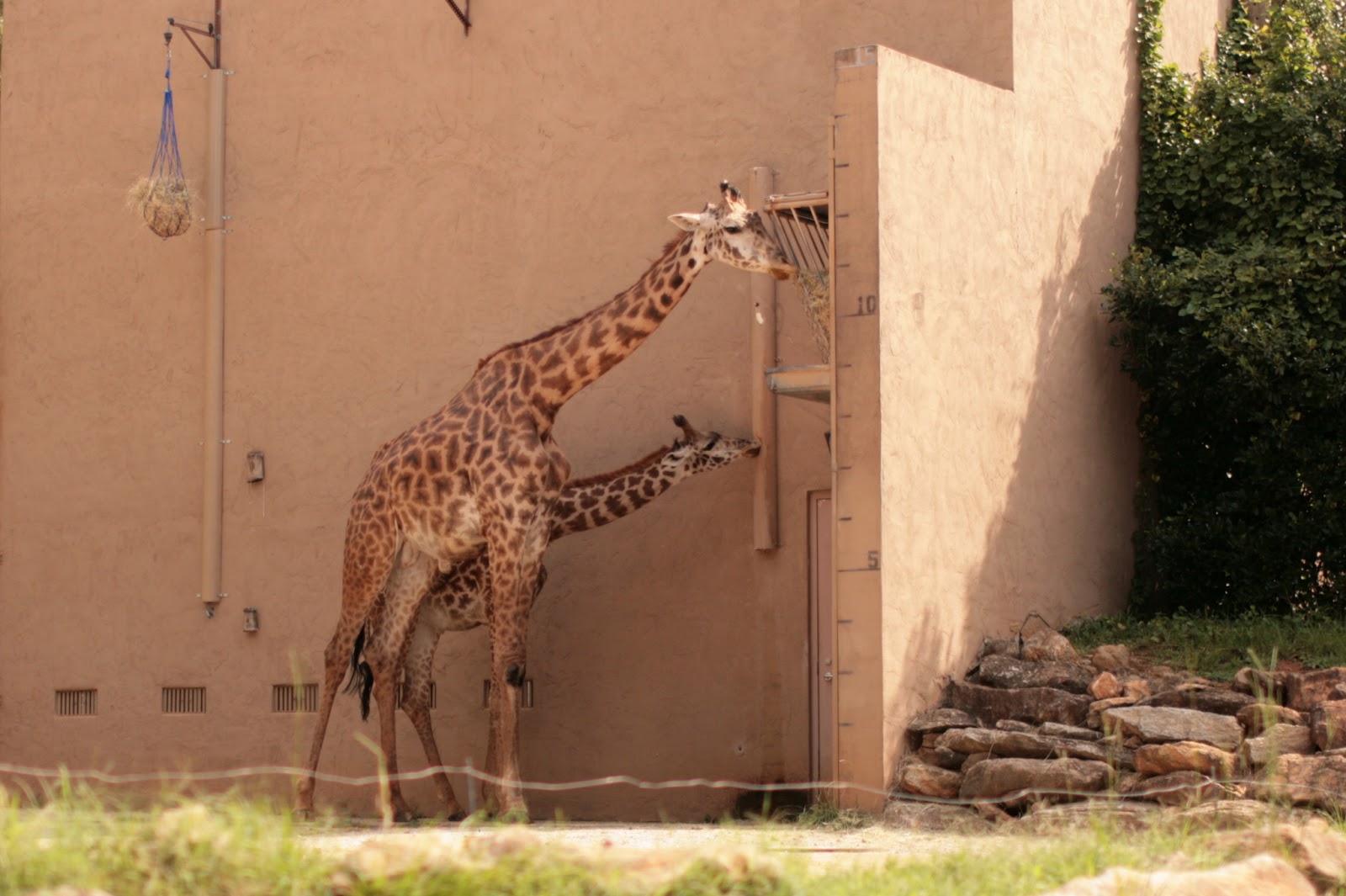 Mommy giraffe Autumn is pregnant again and due any time. What makes me sad, though, is that Autumn and her spouse Walter are just on loan to the zoo. That means the first two giraffes that are born actually belong to the zoos that Autumn and Walter are on loan to us for. The third baby, if there is a third baby, will belong to the Greenville Zoo. The first baby, Kiko, who is 2 years old, will be shipping out shortly. I do not like hearing about mommas and babies being separated so its probably a good thing I don't work at a zoo.

We stopped to pet a tortoise on the way to see the leopards. 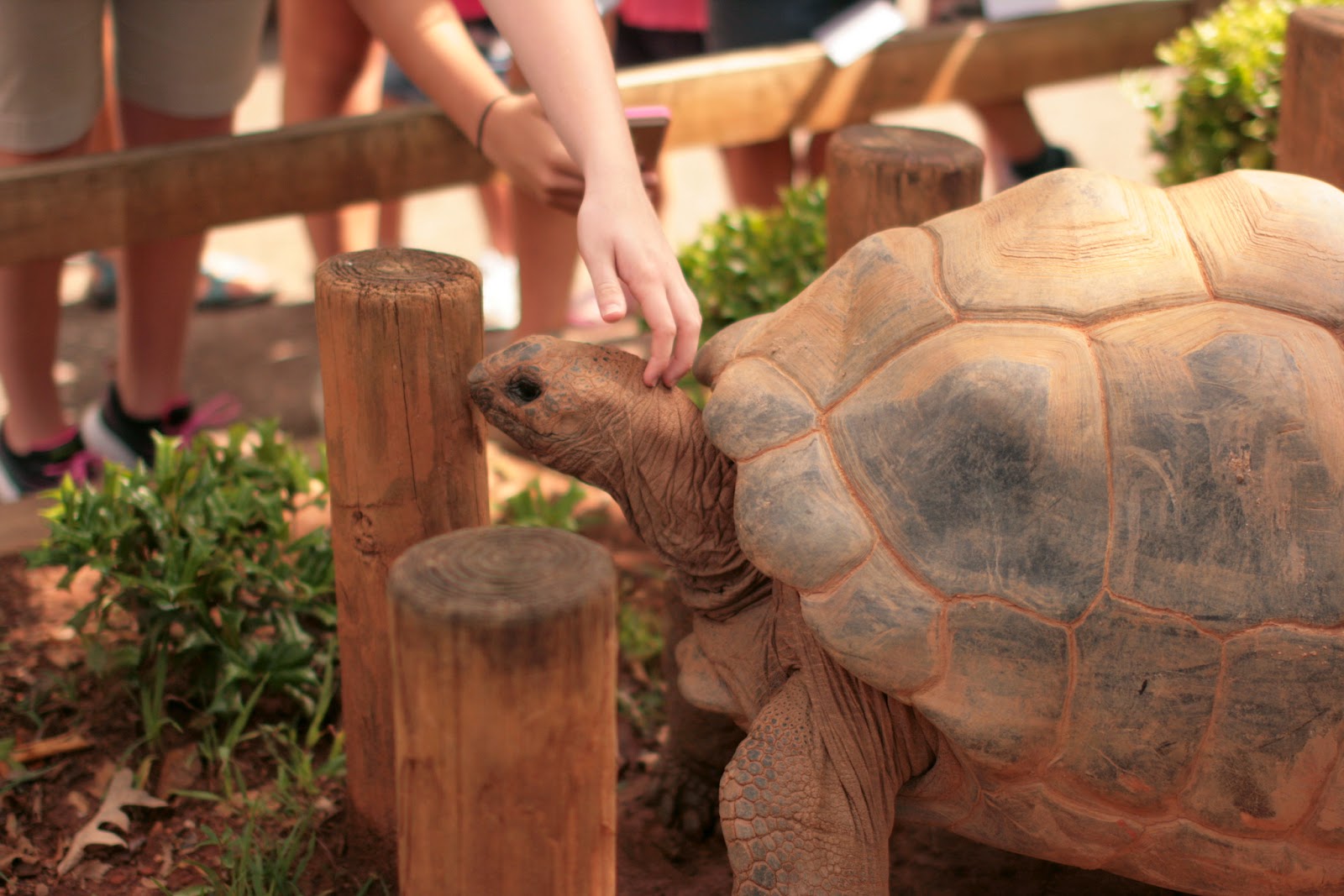 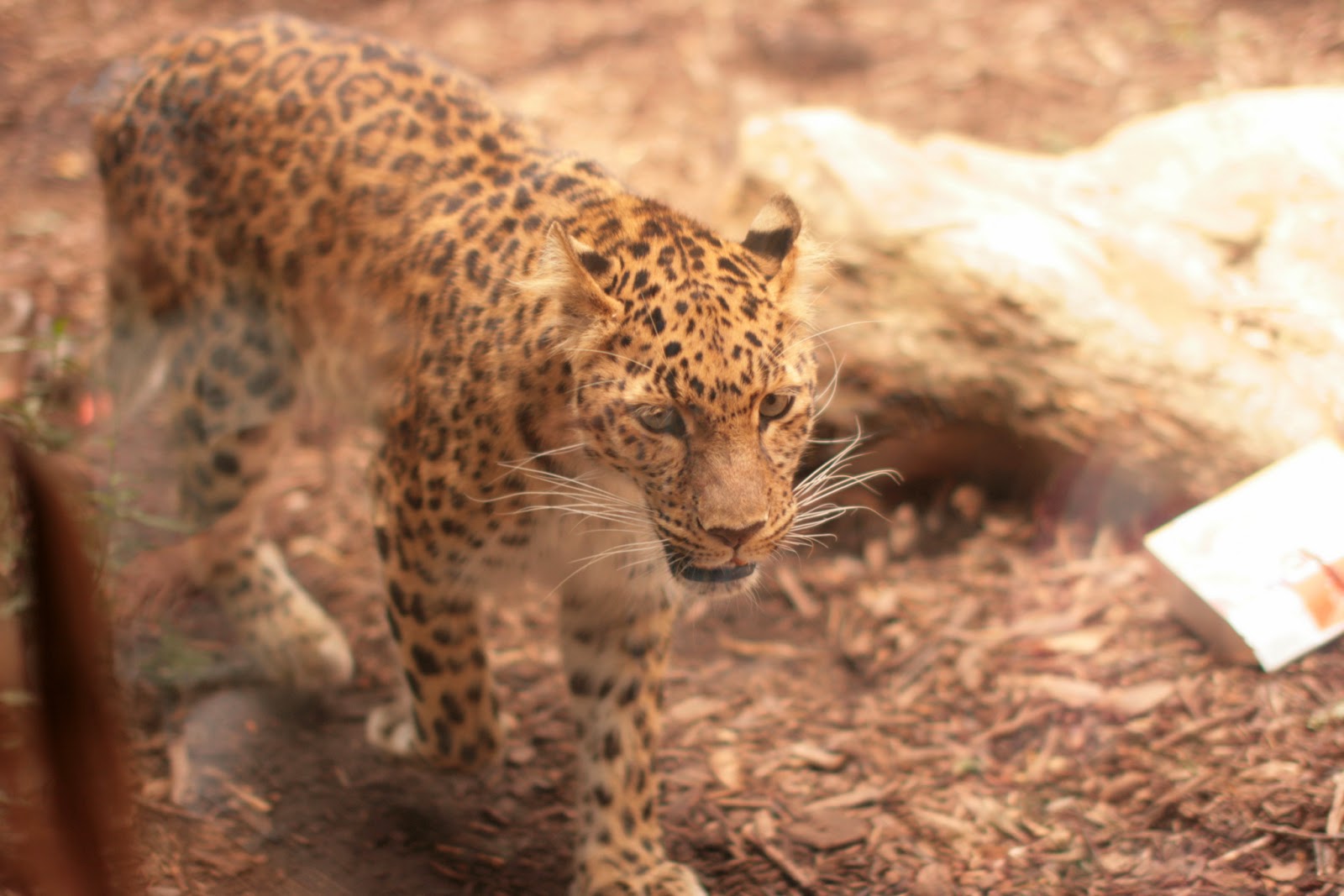 Because of the concerns about the size of the elephant enclosure, I was taking a pretty close look at every animal's enclosure and I just wasn't satisfied. Yes, I am sure the zoo is meeting all of their recommended needs but I just don't think its enough. This leopard pacing back and forth his small cage does not depict happiness to me. 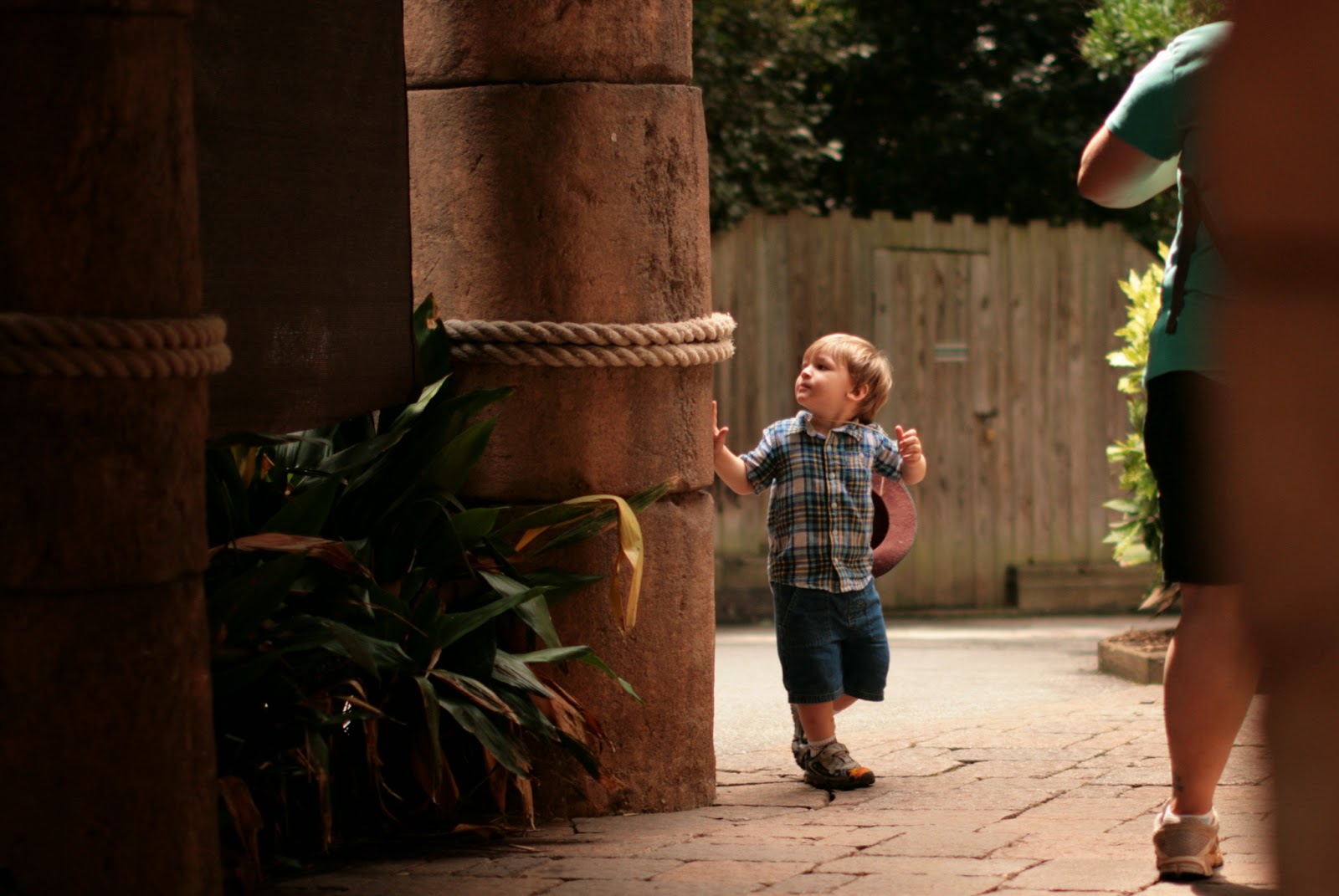 The kids did pretty good staying with us the whole time. That is until Jocelyn decided to go out of the leopard observation area the opposite direction than everyone else was going. We had just realized that she wasn't with us when a daycare teacher approached me with a crying Jocelyn. She was only gone for 5 seconds but long enough to freak everyone out. She was assigned to the stroller for the rest of the trip.

Our next stop was to visit the orangutans.  My camera had a hard time focusing on the actual monkeys and not the scratched part of the glass in the observation area. A momma orangutan and a baby were wrestling right in front of the glass. 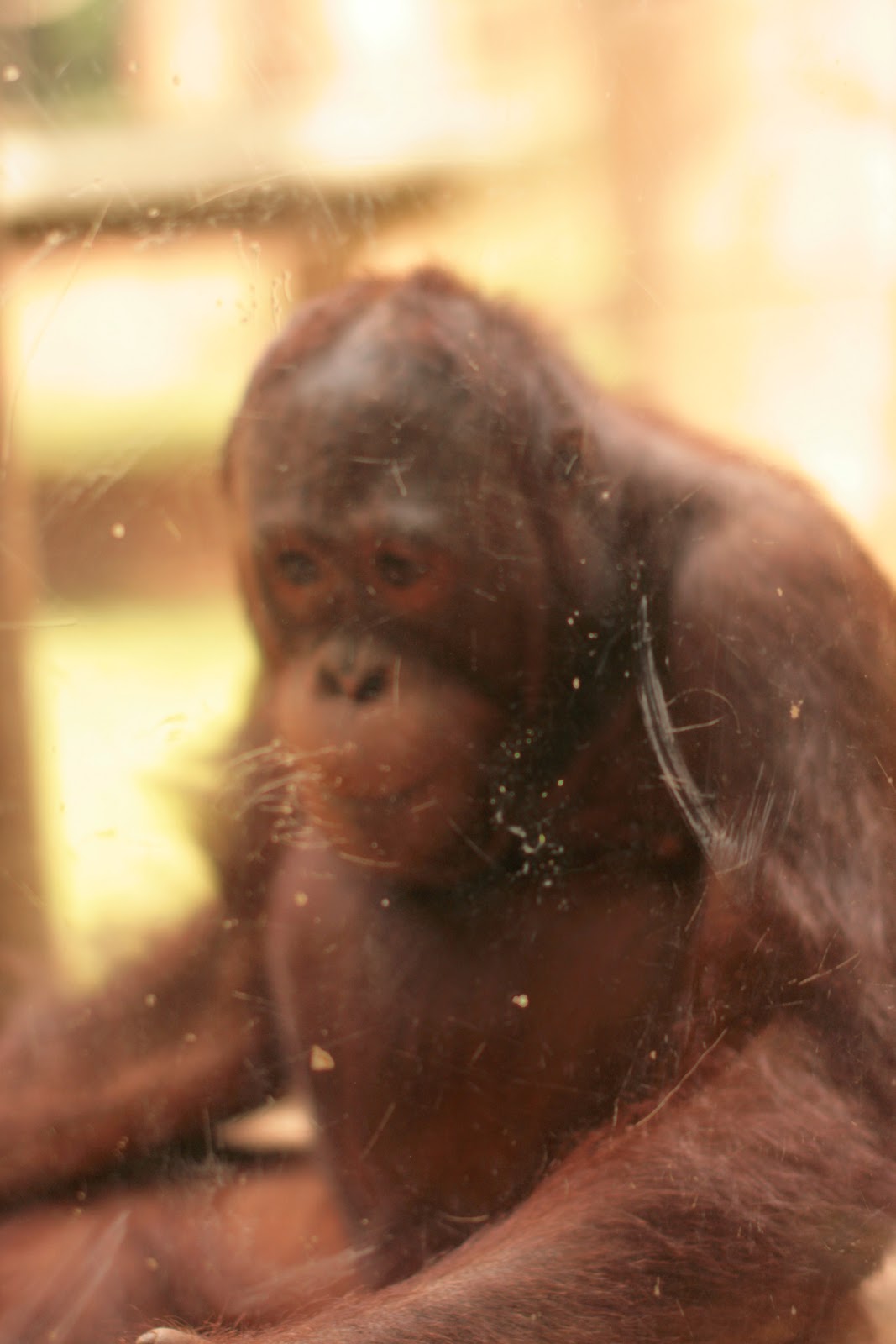 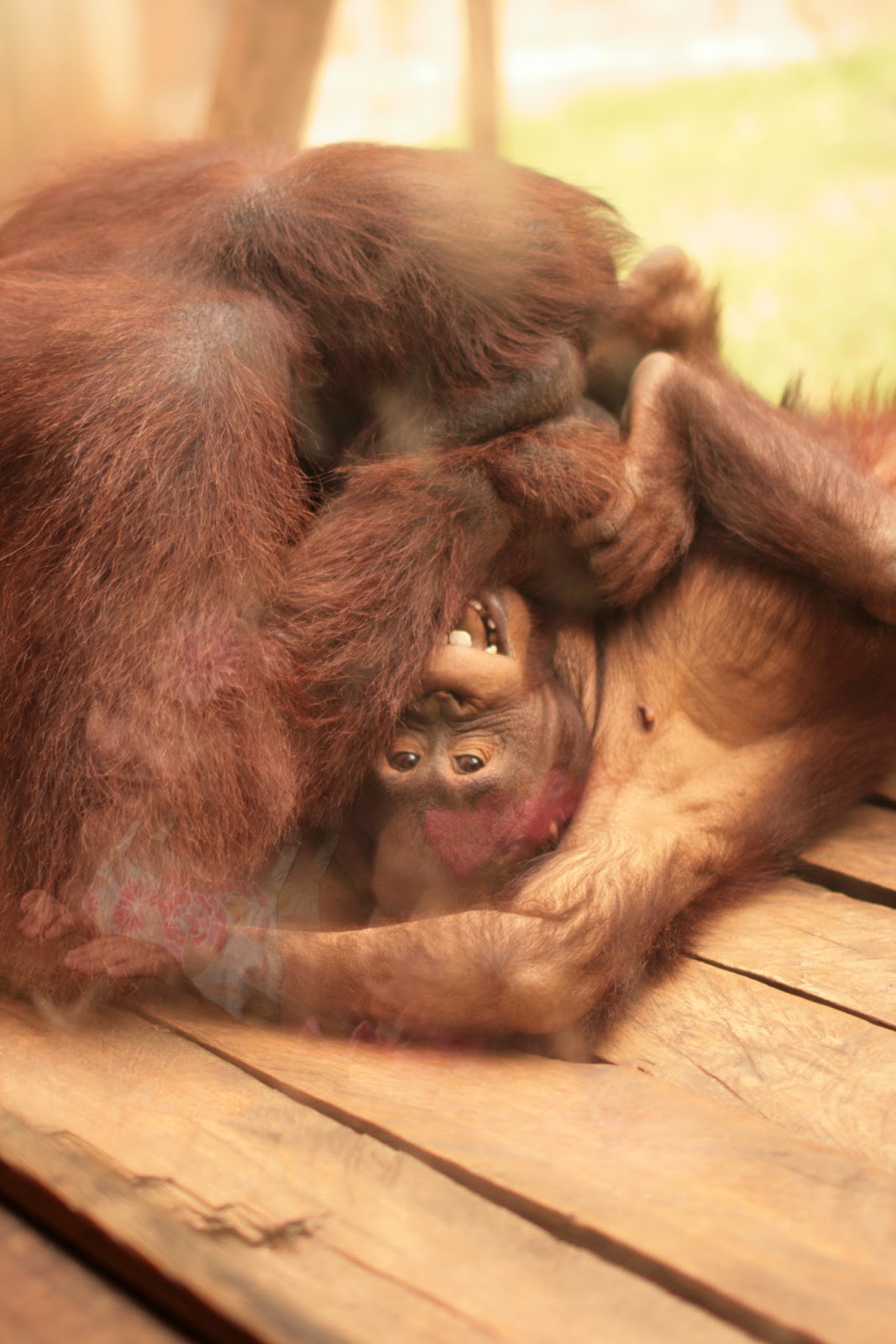 If you look closely, you can see LIvvie and Jocelyn's reflections in the glass. That's why the baby orangutan looks like he has pink on his head. 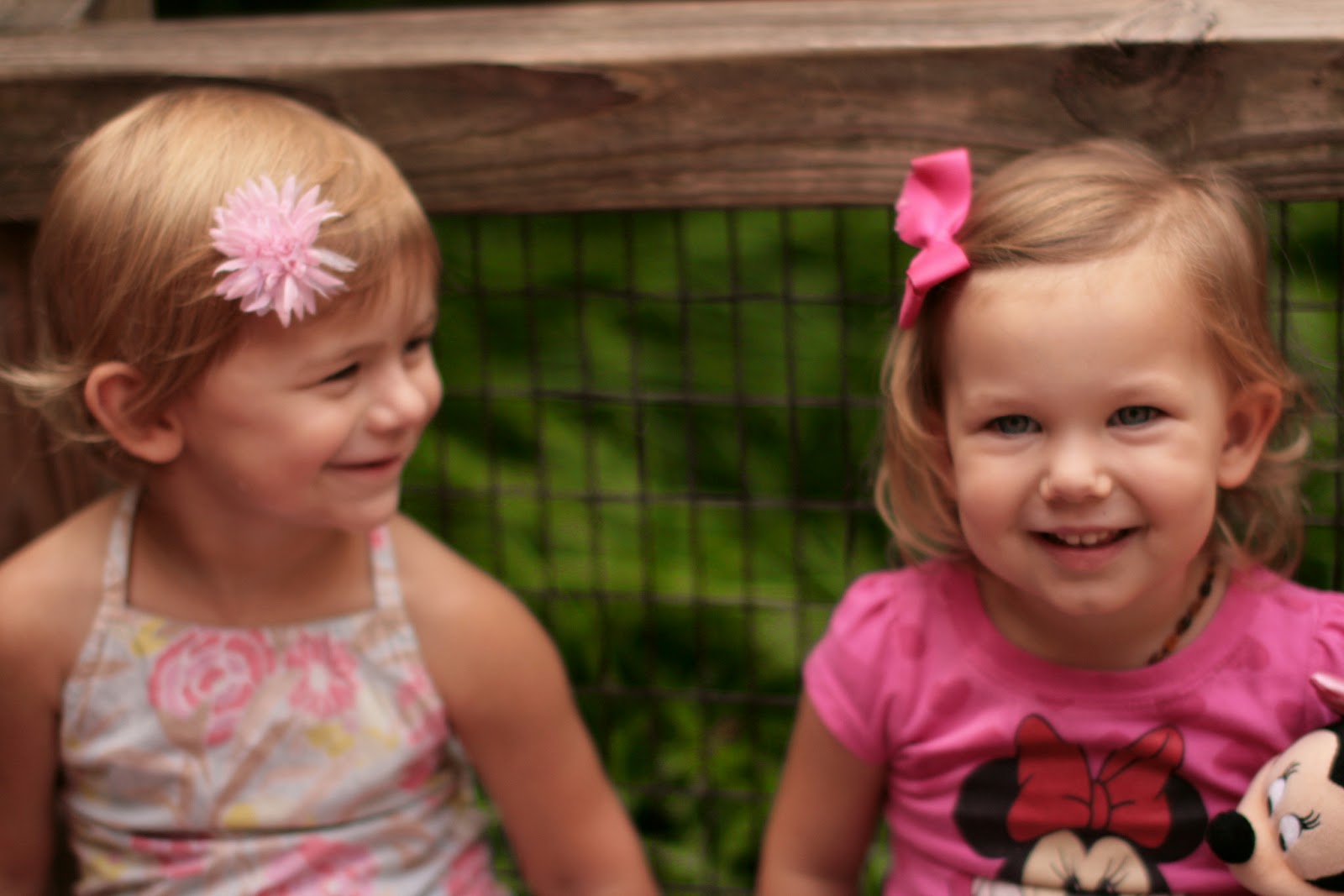 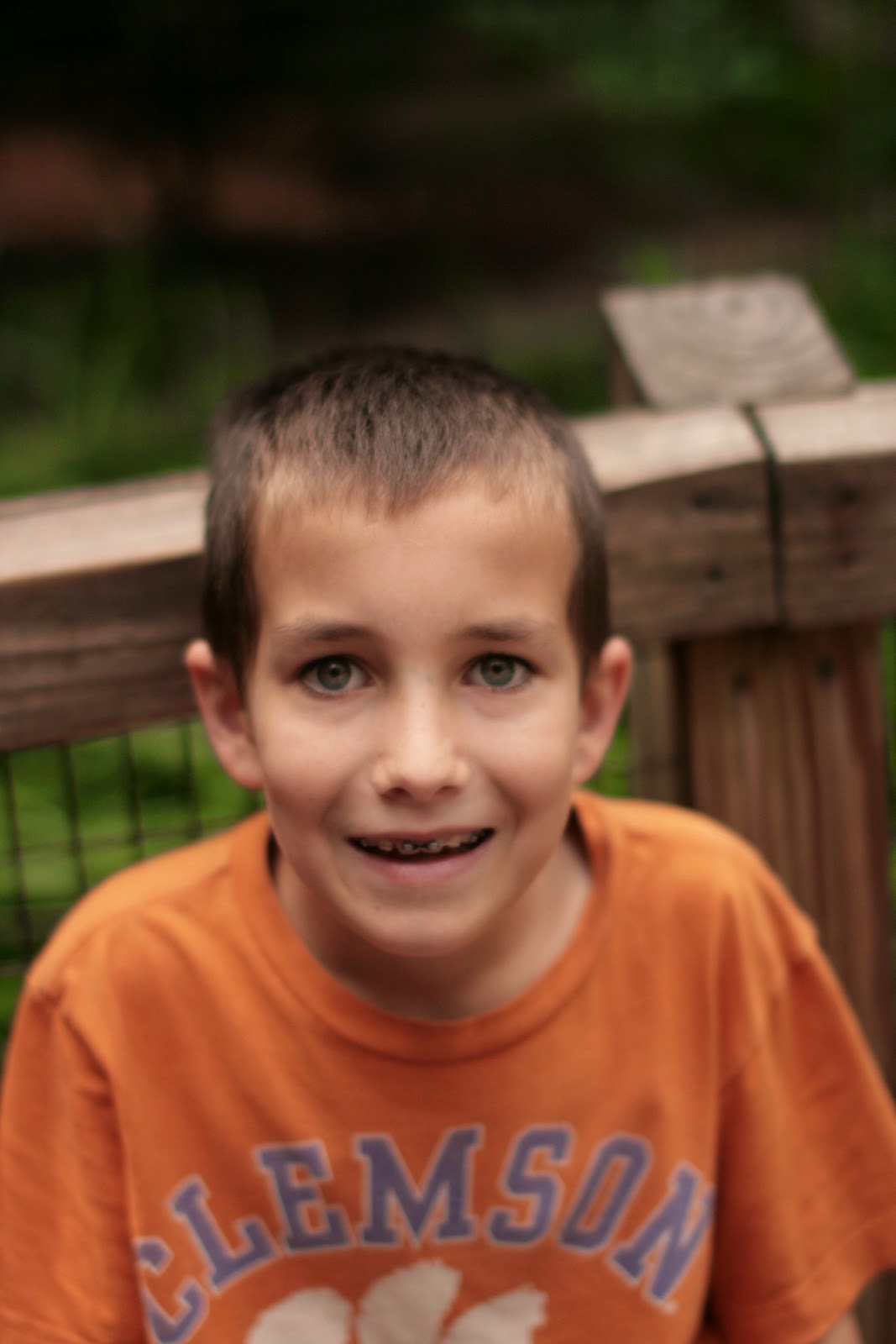 Overall, we had a good time with our friends. Jocelyn was disappointed that we didn't get to see a tiger but buying a stuffed animal in the gift shop was good enough for her.

We went swimming at Becca's house after the zoo. 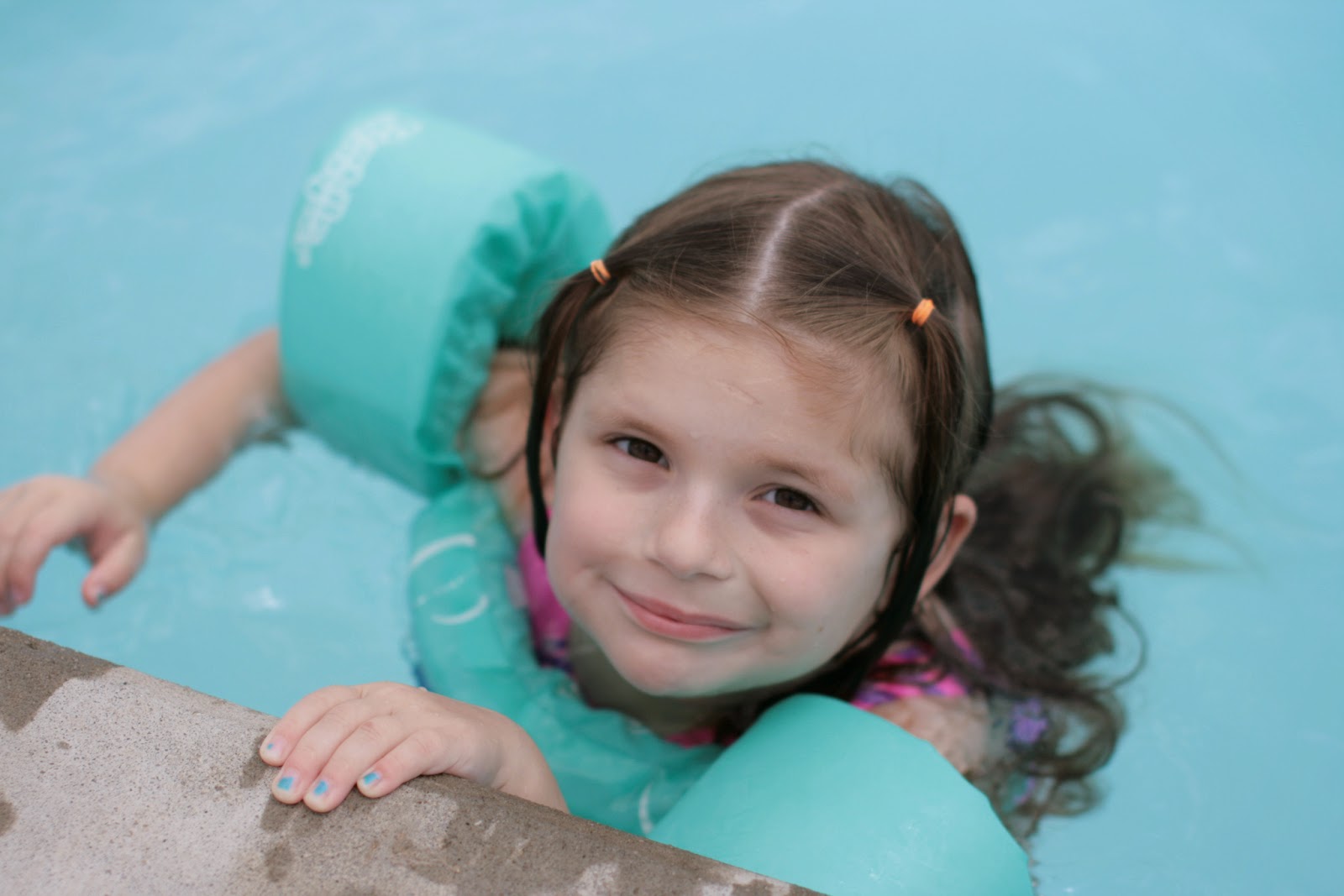 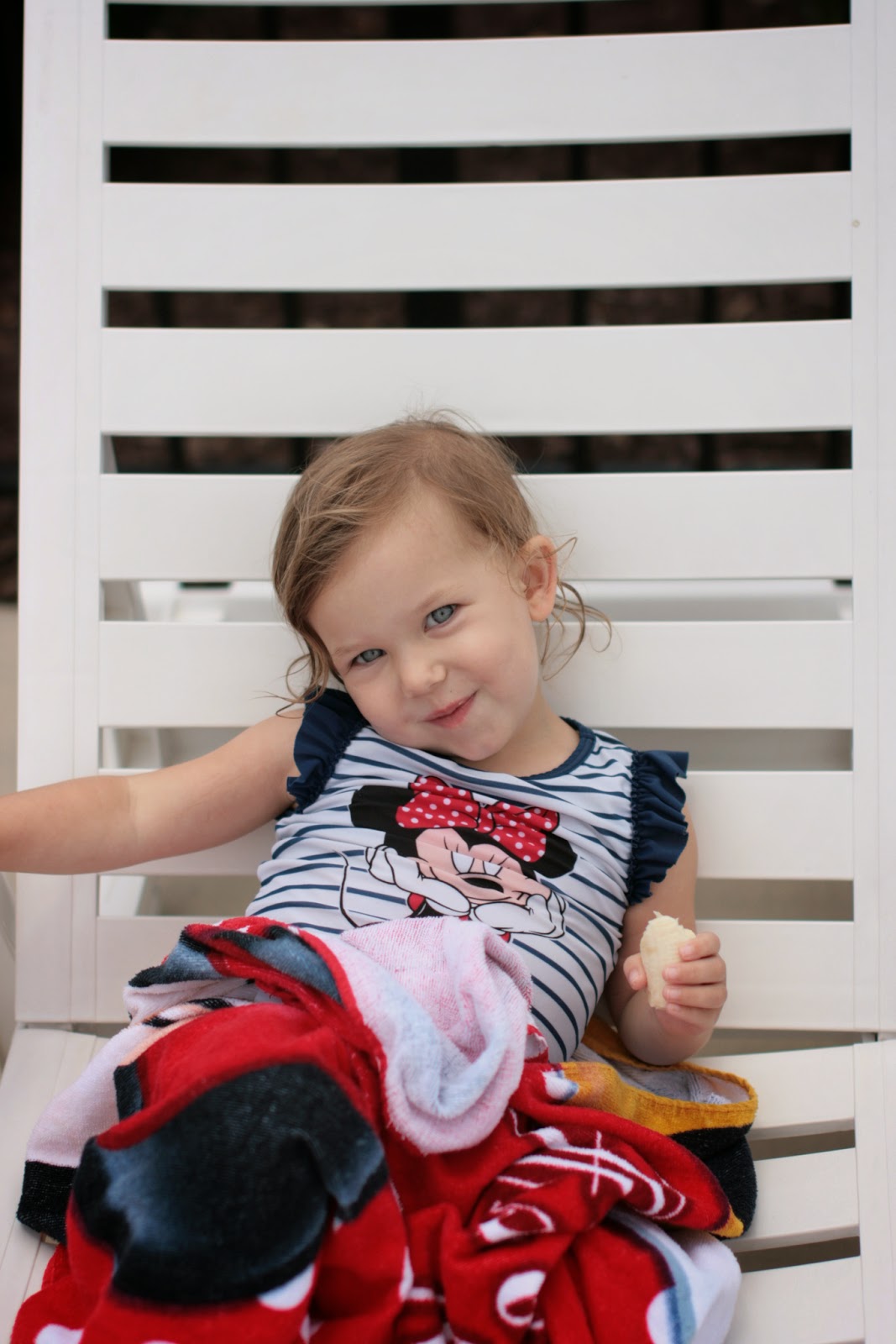 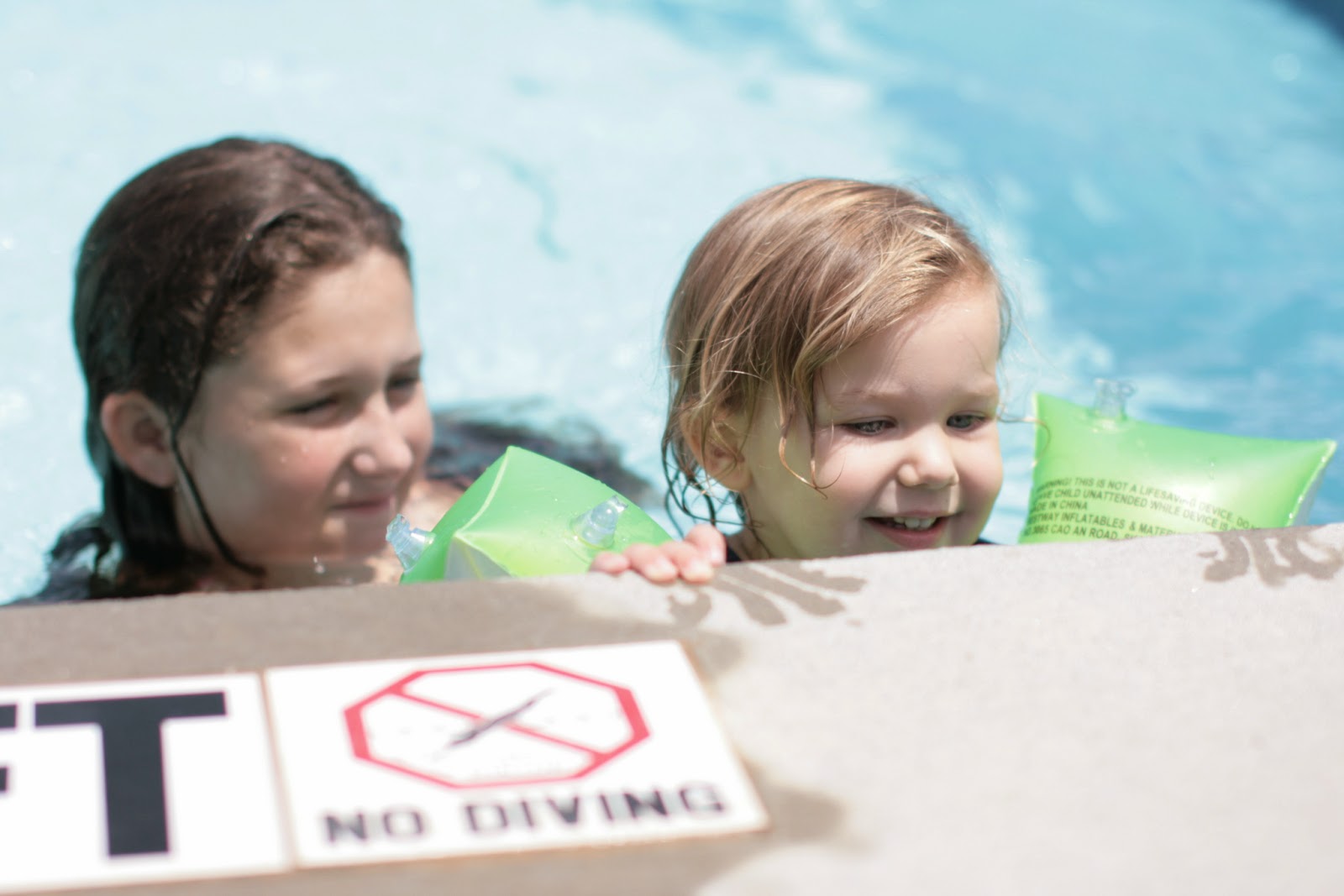 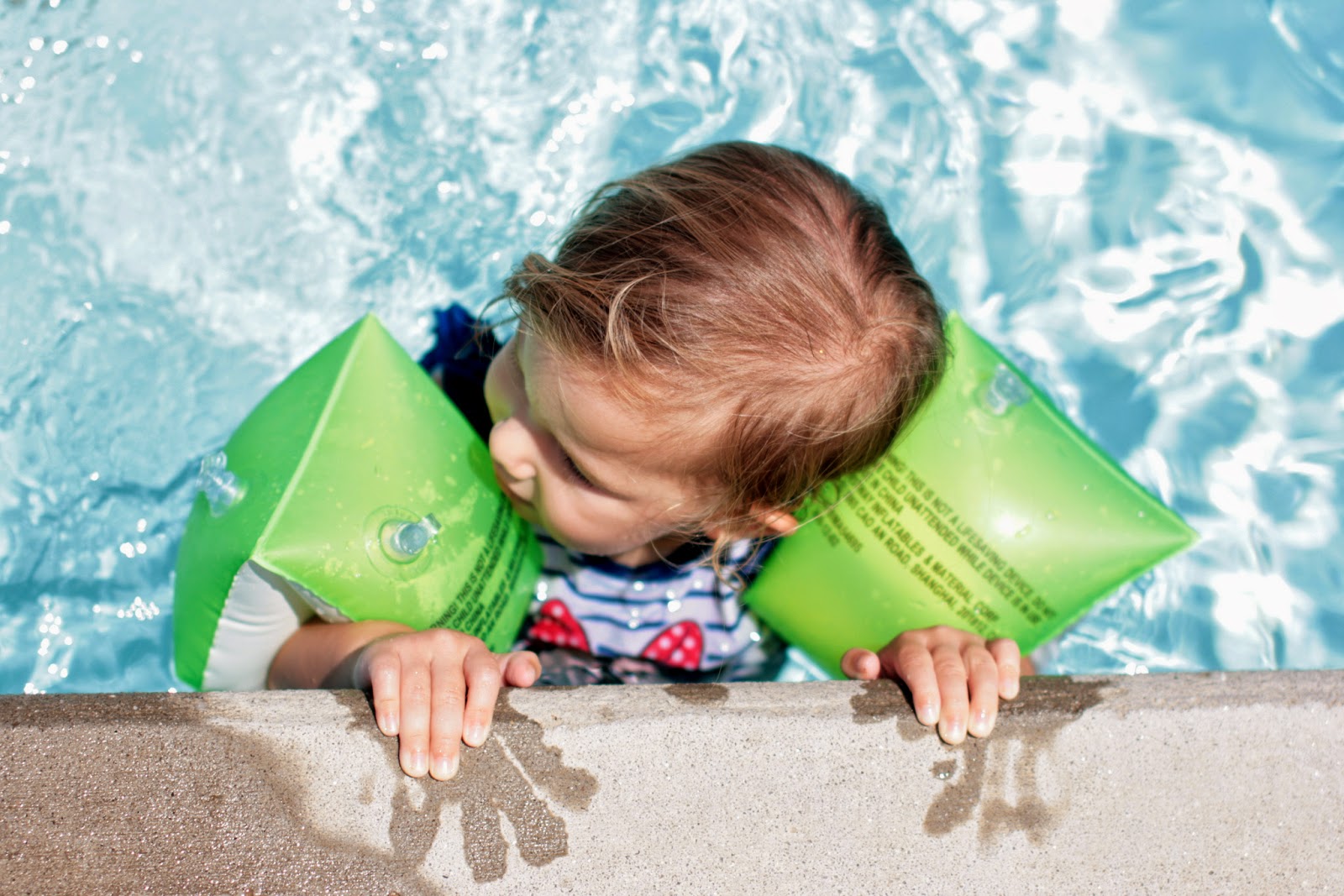 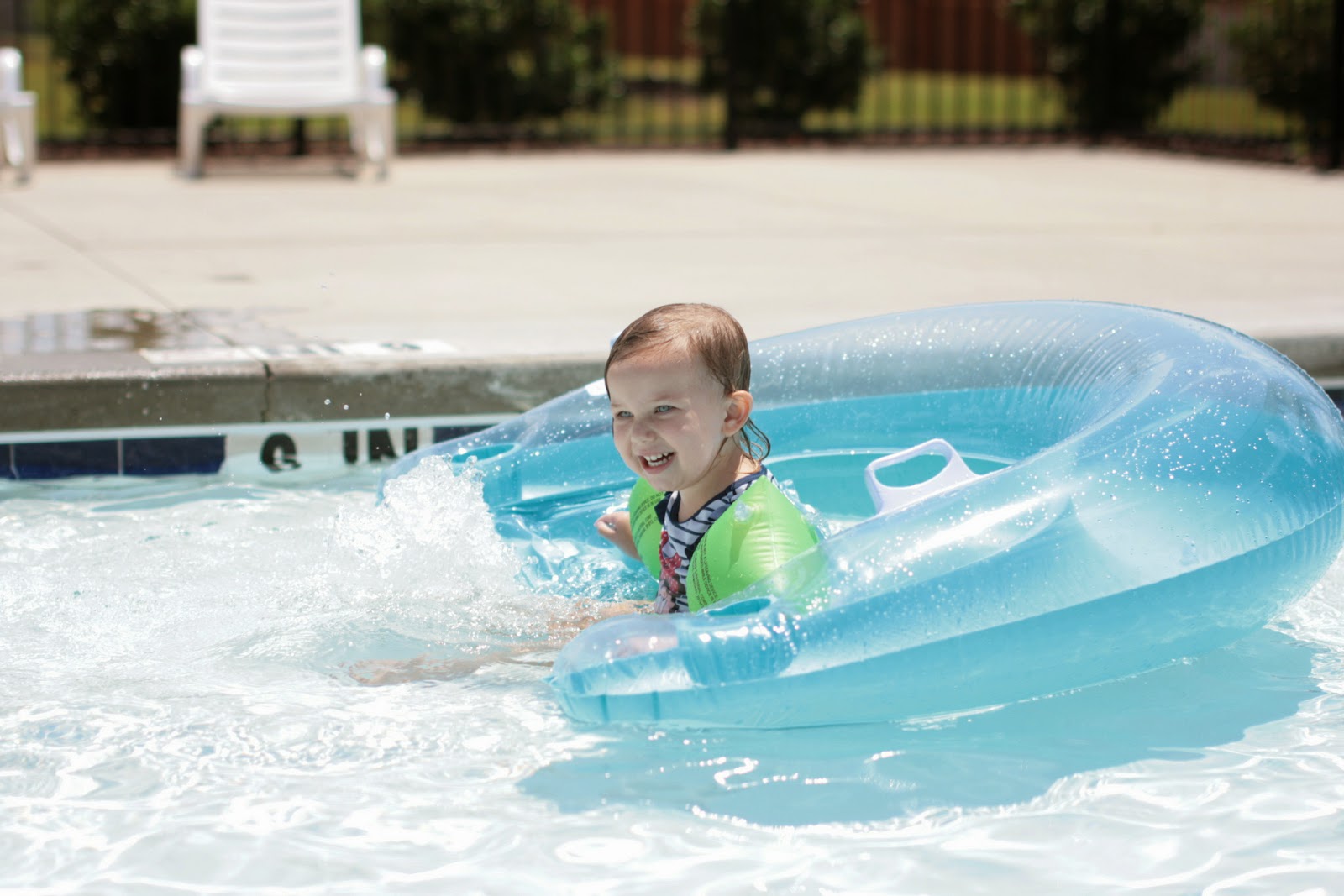 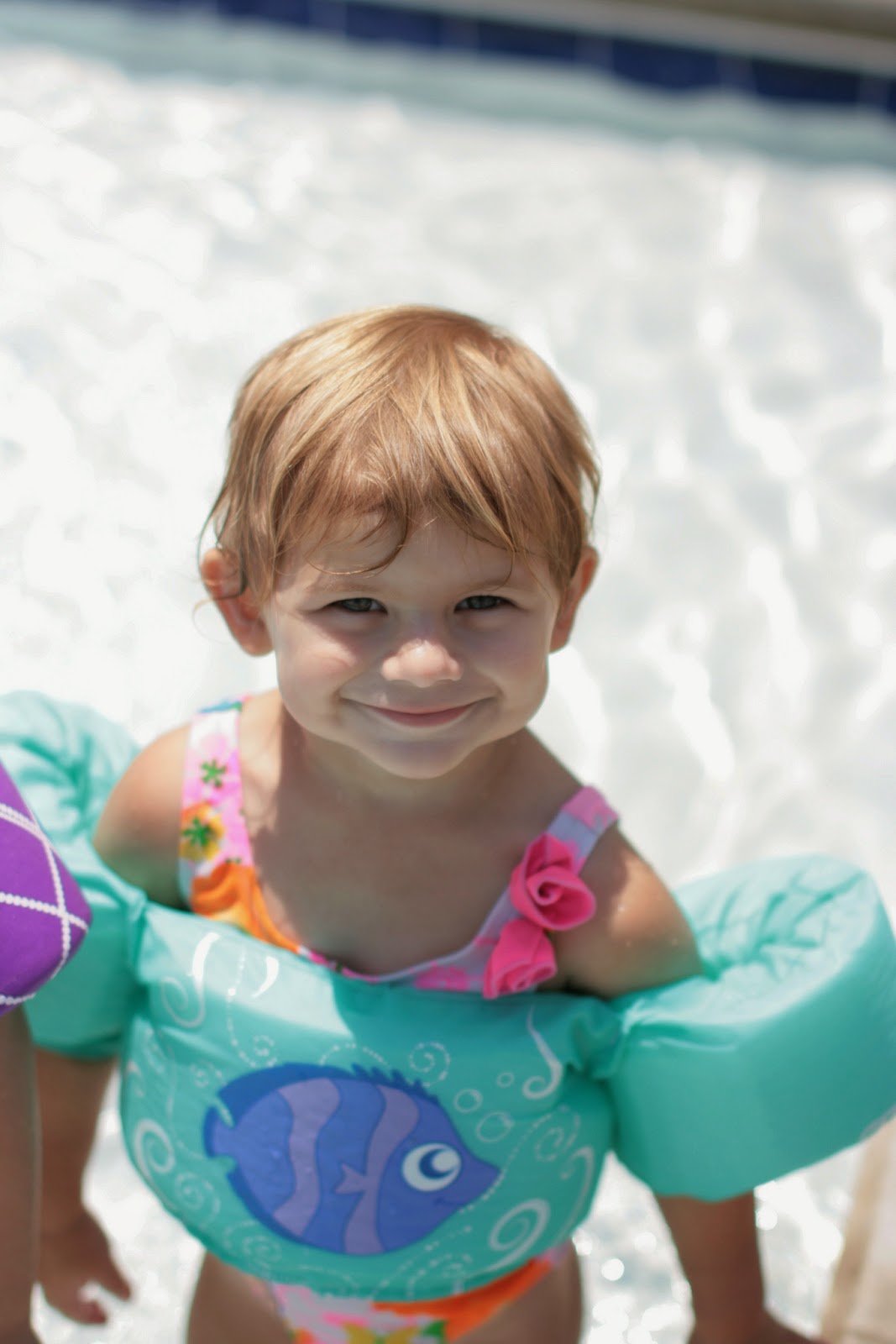 Jocelyn actually wore her swimsuit in the pool instead of using it as day time play clothes or pajamas for once :)
Email Post
Labels: summer fun