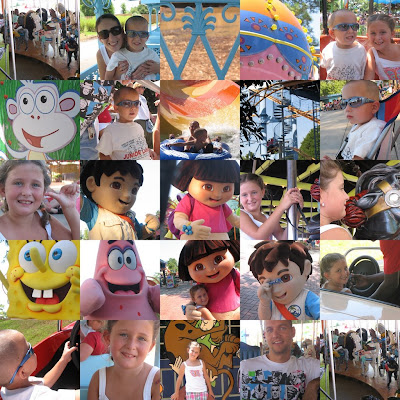 Its become a yearly family tradition to visit the local amusement park on the boarder of North and South Carolina during the summer.

The first year, Jayce was 1 and Jaina was 4. Jaina absolutely loved Carowinds at that age and wanted to go back all the time. Jayce pretty much rode around in his stroller all day, happy and content as can be. I do remember worrying that he didn't nurse as much as he should. I think he was too distracted. 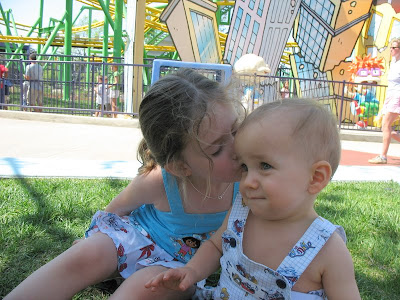 The next year, however, was a disaster. Jayce was 2 and Jaina was 5. Jayce did not like Carowinds at all. This was smack dab in the middle of Jayce's onset of autism characteristics. It was just too much for him. Too many sights, sounds, smells, sensations. And with his speech delay, he couldn't tell us what was bothering him at all. He was miserable the entire day. We tried to make the best of it for Jaina, but it wasn't very fun for any of us. 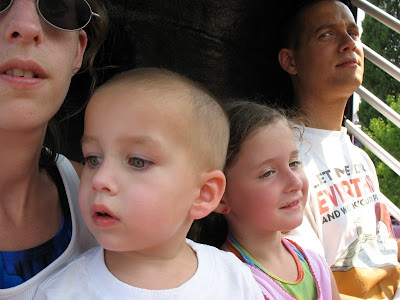 With lots of guilt, we decided to leave Jayce home the next year. Although he was already in therapy for speech and sensory issues, we were worried about a repeat of the year before. We left Jayce with either my mom or Monica (I can't remember which one now) and off we went. The saddest thing, I think, was that Jayce didn't even understand where we were going, nor cared that we weren't even there with him all day. 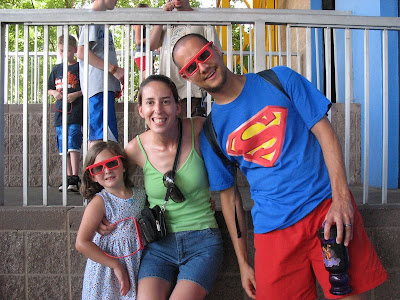 Fast forward to this year:

Jayce really enjoyed the amusement rides at Jaina's school festival this past year, so we knew he would like the rides at Carowinds. We brought the stroller, though, because we knew he felt comfortable strapped inside if things got to be too much for him. Jayce totally blew our expectations out of the water. He waited in line patiently. He wasn't scared on any of the rides. Jaina, was, however! She refused to go on the Scooby Doo haunted Mansion ride even though Jayce rode it twice. He kept insisting that it wasn't scary, but she wasn't buying it!

Jaina was a bit disappointed, however, at her size. See, you have to be 48 inches tall to ride the majority of the roller coasters. Last year, when she was 6, she was 46 inches tall. This year, she was 47.5 inches. Just barely under the line! But Carowinds officials can't budge on safety, so she was limited on what she could ride on. I told her next year would be her year of fun :)

We had a blast and can't wait to go again! We always go on a Tuesday to avoid the crowds. When I was putting Jayce to bed tonight I said, "Tomorrow is Tuesday, what do we do on Tuesdays?" I expected him to say, "Go to hospital to therapy to see miss candy and miss melissa" but instead he said, "Go to Carowinds!"
Email Post