Good news for a change!

When Jayce and I arrived at his Orthopedic appointment Tuesday morning, we were prepared to get a full plaster cast that extended above his elbow.

Instead, we got one of these: 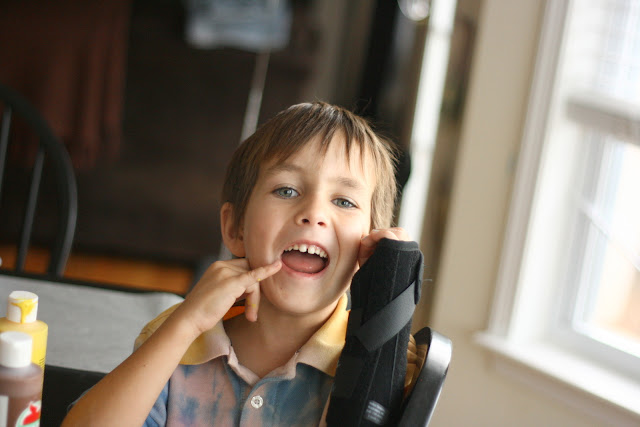 No, not the Dr. Evil-finger-to-the-mouth smile. That comes free with Jayce. :) 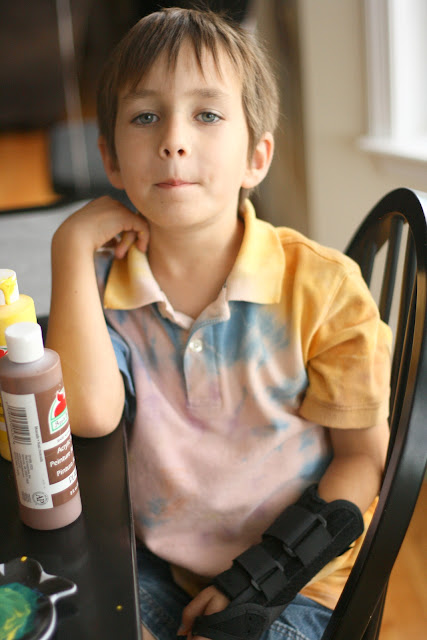 The doctor said that buckle fractures were no big deal. And that in the past 30 years of him practicing bone healing, he'd never seen one that needed a cast. He even told Jayce he could still play soccer! :)

Was Jayce happy? No, he was not!

Jayce wanted a plaster cast. One that all his friends could sign. He ordered the doctor to go get him one.

He finally convinced Jayce that plaster casts were heavy and smelly and he would only like it for one day. Then he showed Jayce how to do all the velcro straps on his brace.

"I can take it off whenever I feel like it?" Jayce asked, amazed.

I was worried that he wouldn't keep it on. I was worried for nothing. Jayce doesn't even like to take it off during his bath. He never complains about his arm hurting him unless his brace is off. Then he holds his wrist in his other hand and asks me to hurry with his bath.

Hopefully he'll only have to wear it about 3 weeks or so.

Me, on the other hand?

Not such good news.

I probably didn't mention it weeks ago, but around 19 weeks pregnant or so, I hurt my left foot. I have no idea how I did it. One morning I woke up and it hurt. It was about the time when my morning sickness stopped and I started walking in my neighborhood again. Coincidentally, I also got shin splints the exact same time. My body sure showed me what would happen if I took an 18 week break from exercising!

So, I just ignored the pain in my foot. I mean, seriously... even if it was broken, what is a doctor going to do about it?

I was in Vegas (pictures to come soon, I promise!) when I realized that I was going to have to take this foot thing more seriously. Every night it was swollen and throbbing.

Finally, I get in to see my family doctor. She thinks, "Stress fracture", takes x-rays, and tells me to keep my foot iced and elevated for a week. I just laughed at her. Then I asked her if she was married with kids. She said, "No." Figures. Only an unmarried woman would assume that a husband would clean, cook dinner, and take care of the kids for a week. My own husband would clean, but that's about it!

So, I leave the office and go on my merry way. Honestly, the pain is only bad at night now. I tell myself that I'm going to try to rest a little more and at least stop playing baseball with Jayce outside. I can't tell you how many times I've been in pain after running bases!

A few days later, my doctor calls. "Um... its not a stress fracture. The hospital radiologist says you have several fractures that showed up on your x-ray. You are going to need a cast."

A cast, with crutches? Not gonna happen. I keep an almost 11 month old in  my house. Not to mention run a photography side business that is booked up for the month of October.

We compromised with a walking boot. 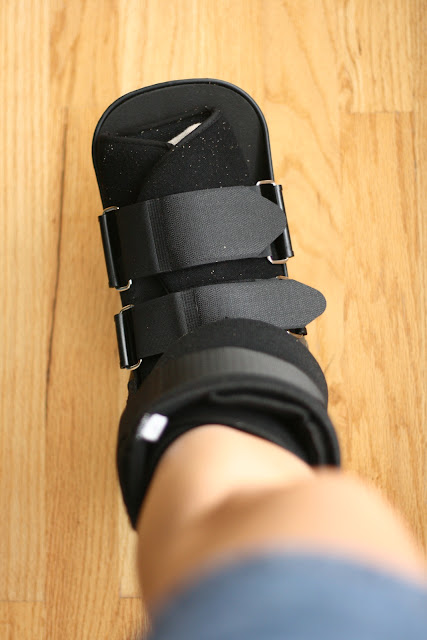 When I came home with it Thursday afternoon, I told Jayce, "Look! We match!"

He looks at my seriously and says, "No, mom. You broke your foot. I broke my arm. That does not match."