Get ready for some baseball!

Opening day was on Saturday, March 22nd and we couldn't have asked for better weather. 75 and sunny? Yes, please!

Although the parents weren't happy with the location of our opening day (Um, why do we pay for those super nice fields down the street if we can't use them for stuff like Opening Day?), it all turned out okay. Well, there were a few mishaps... the game ball was dropped off in the wrong field, two separate photography companies for two separate districts of teams was a complete clusterfuck (excuse my language, just describing it accurately!), and there was nowhere to put the inflatables.

But Sparty the USCUpstate Spartan was there. 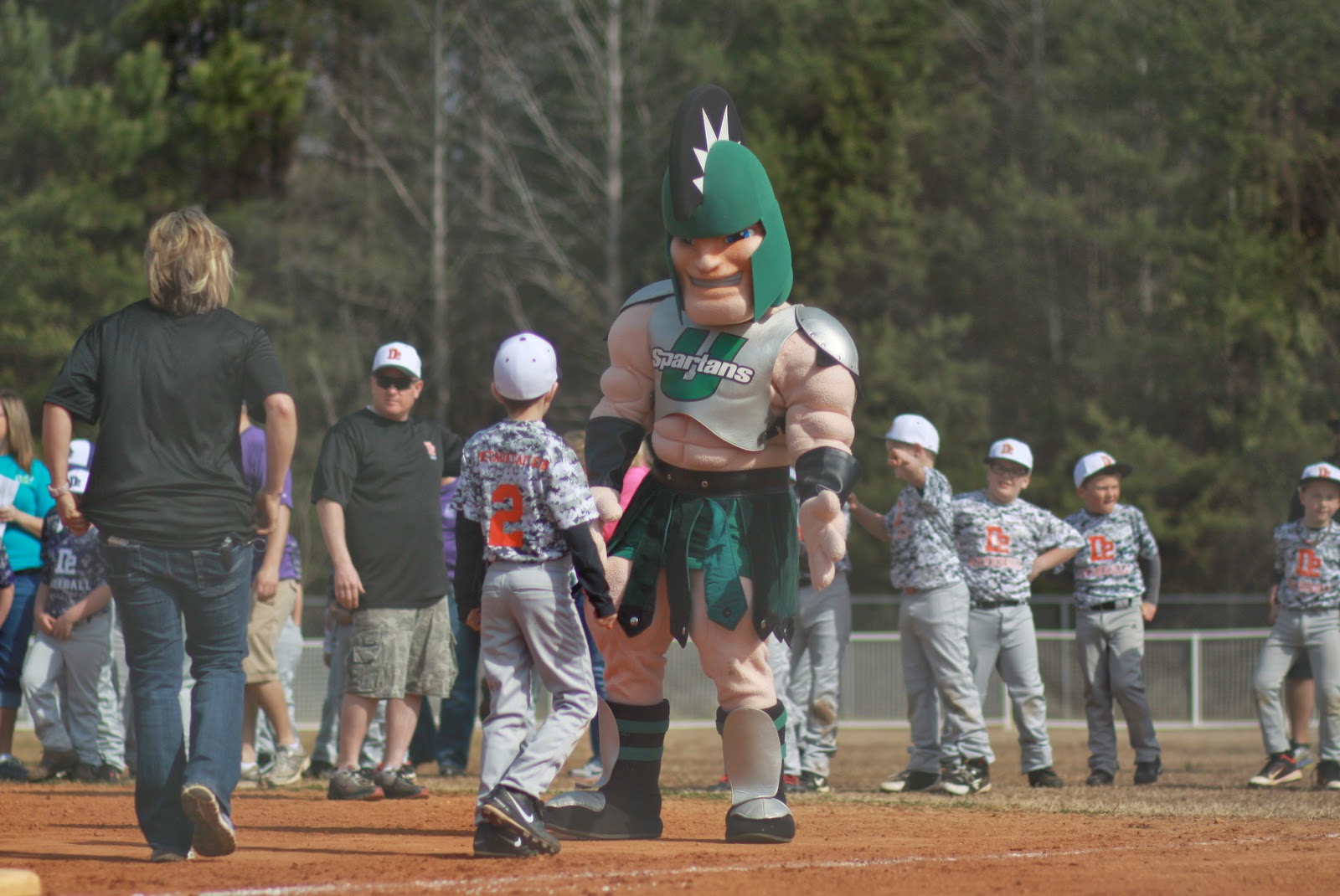 And the Clemson Tiger. Who decided to sit in my chair and drink my coke. 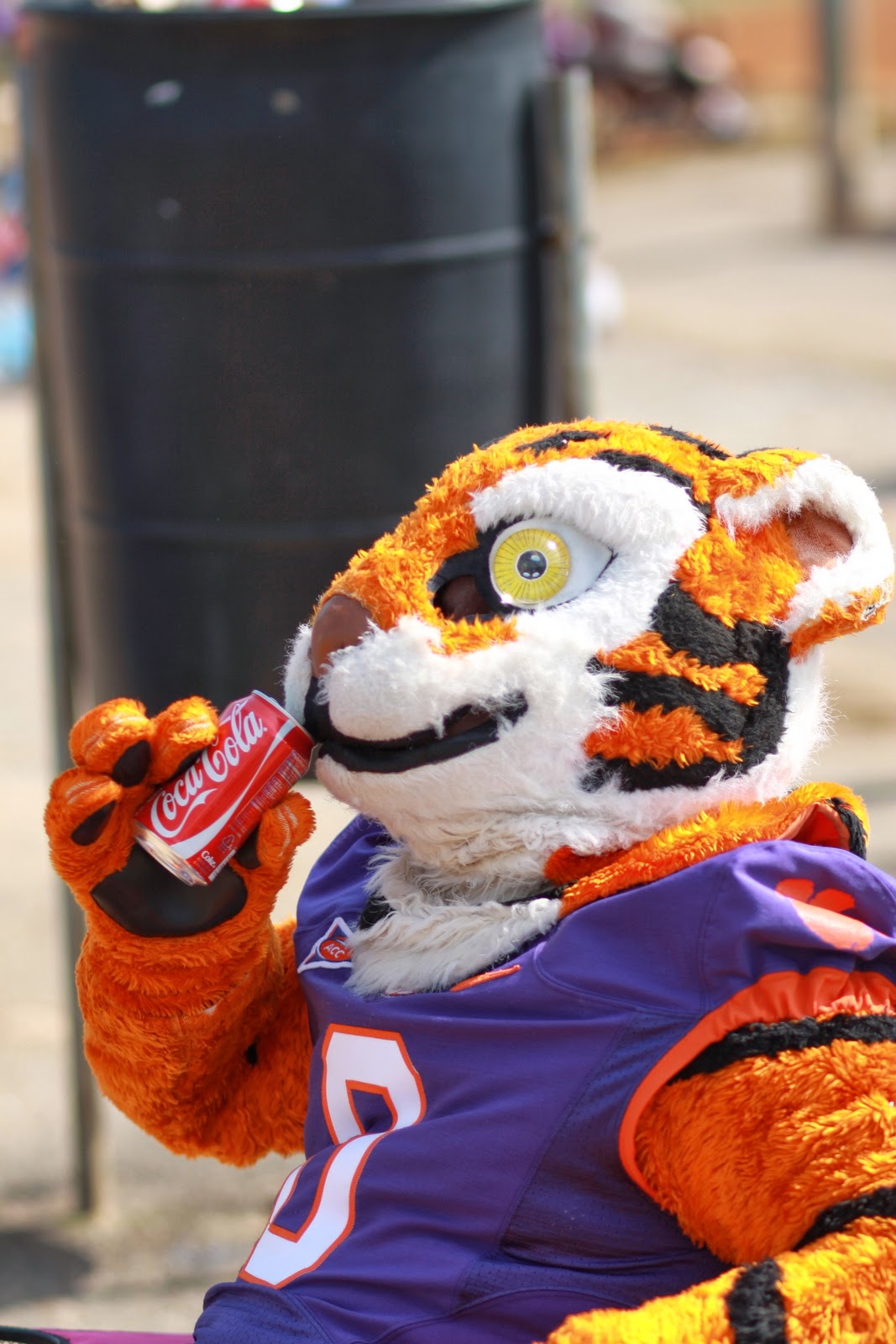 Jocelyn was NOT amused. She actually cried when he first sat in my chair. "Mommy sit?" 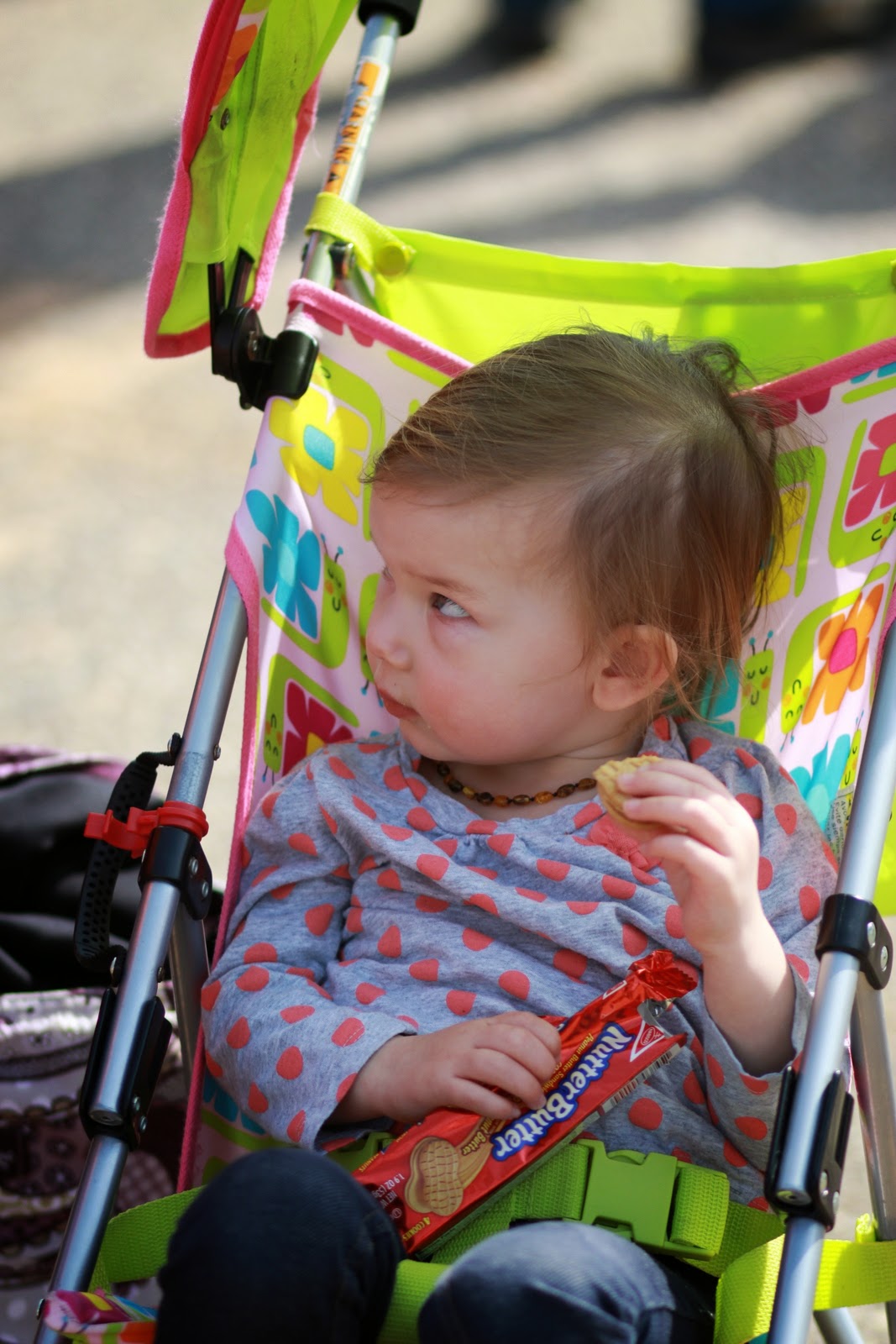 I don't know where USC's Cocky the Game Cock was. They announced that he was going to be there. Oh well! Jayce roots for Clemson anyway :)

All 175 kids on all teams were announced one-by-one and ran all the bases on the field. Yes, it took as long as it sounds :P

Finally, finally, an hour late, we got ready to watch the scrimmage. We were set to play against an Inman team on Field D. But after we got set up there, we got moved to C. 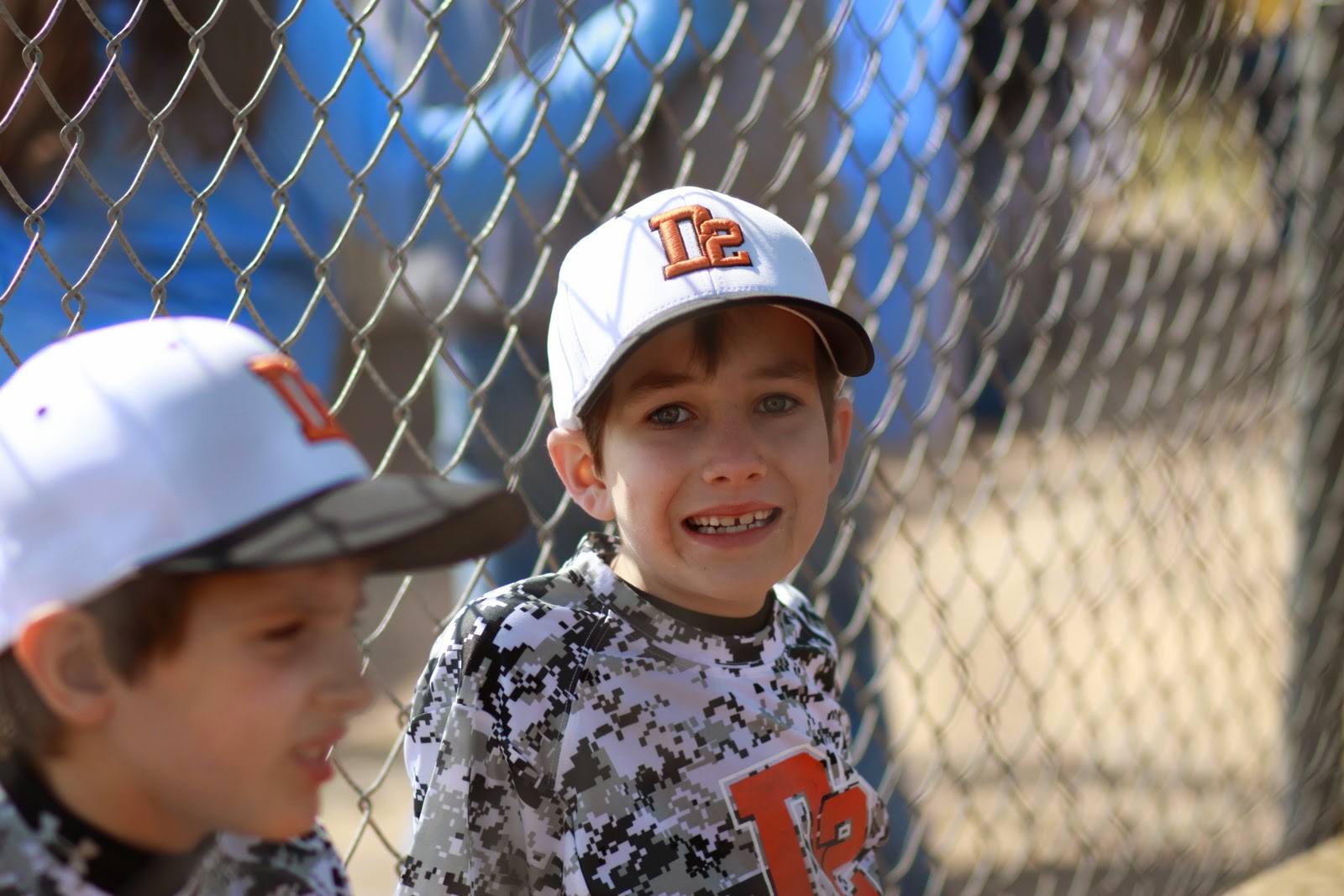 Jocelyn didn't like Jayce in the dugout, which she called "The Cage" and told Jayce he needed to get out of there. 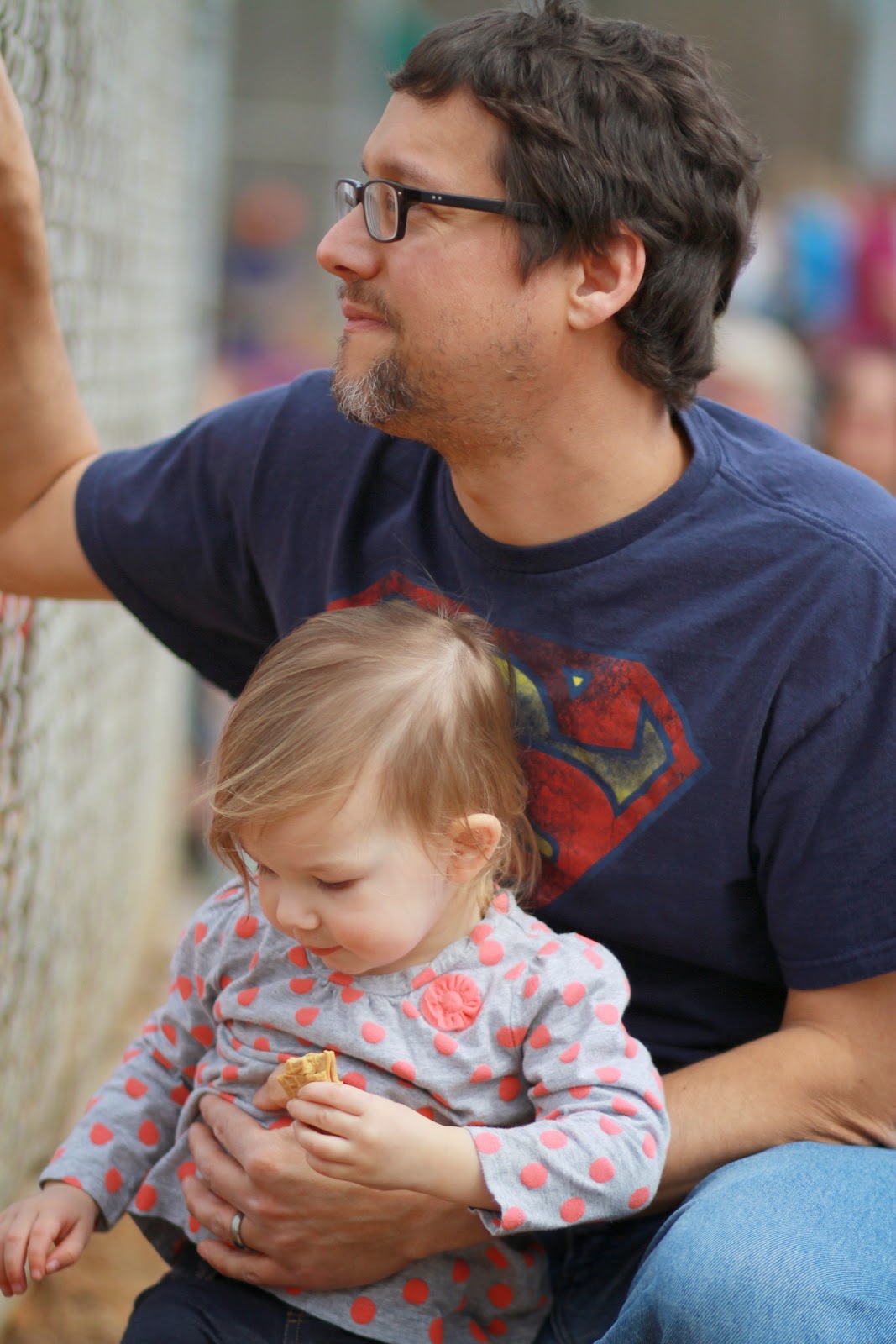 The rules for the scrimmage were weird. Each team would bat 1/2 their team for the first inning and then the rest for the second. That's it. Two innings; 45 minutes. It also didn't appear that anyone was keeping track of balls or strikes. The players got 6 pitches and then walked if they hadn't swung at all of them. Um, okay. So, Jayce walked after 6 pitches that may have been balls or strikes. He didn't swing but one time and it wasn't a great pitch. He also had to jump out of the way from a ball that almost hit him in the leg. Don't you love 9 year olds pitching?? :)

So, he walked to first, stole second base, got batted into 3rd, and then slid home. 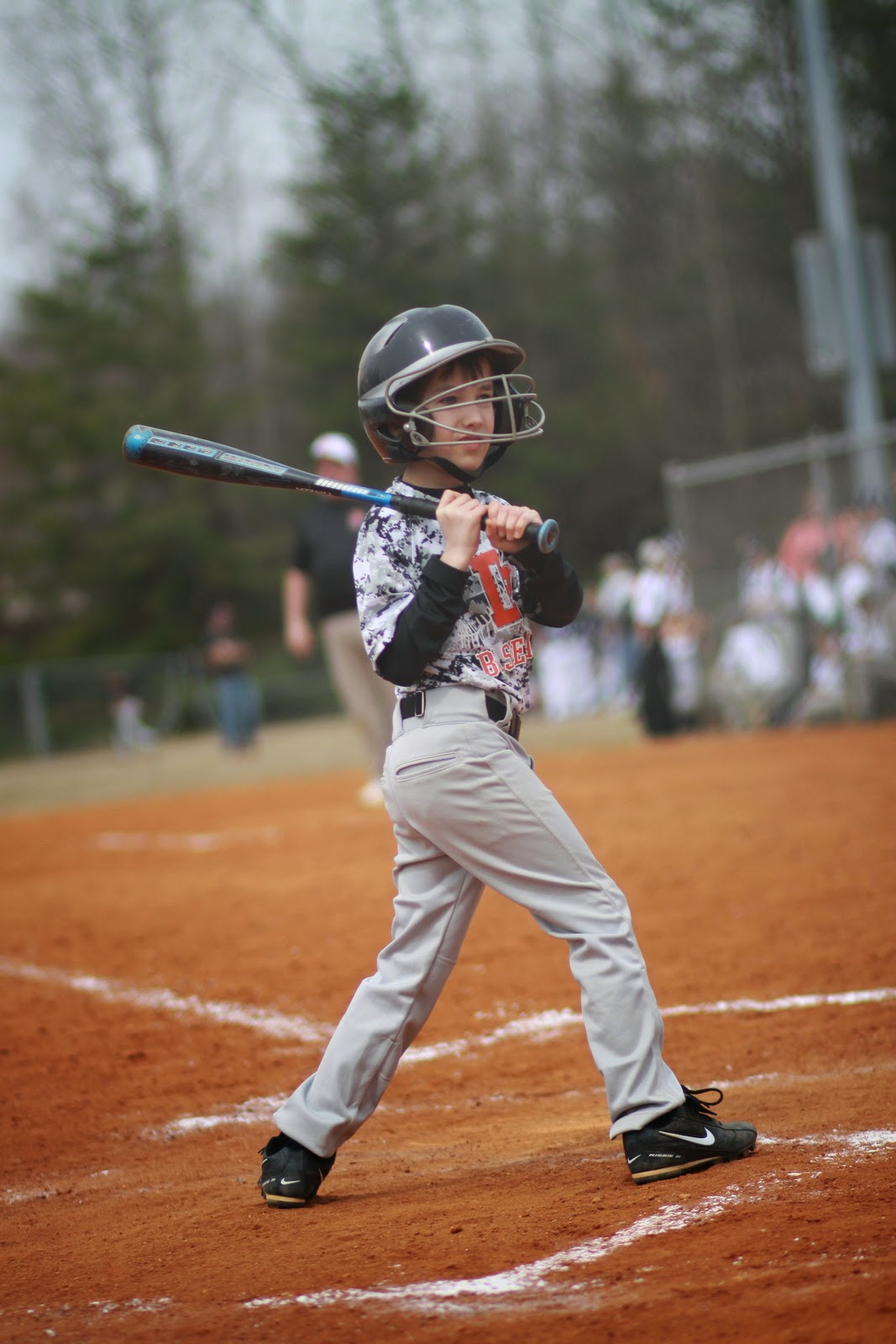 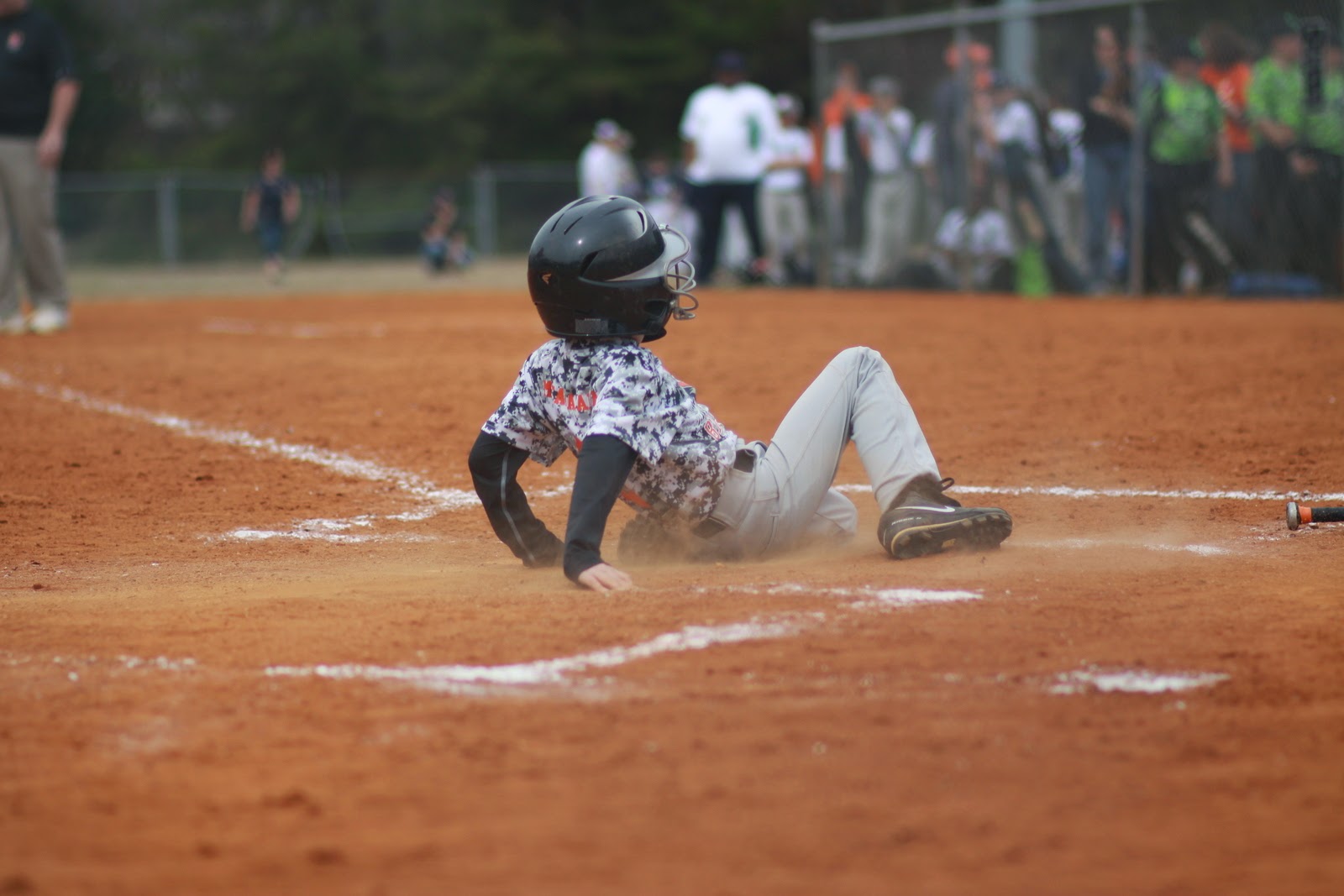 It was not a very exciting scrimmage and I honestly don't even know what the score was. Or if it mattered :)

We were excited for the first real game of the season which was last night.

We were not excited for the weather. It was freezing.

Our team was going up against one of the best teams in the district. They crushed us in the Fall several times. And last night was no exception. Ugh. The game was almost painful to watch.

Jayce always bats last, or second to last, and honestly, if he had struck out, it wouldn't have been a big deal since most of his team had struck out earlier. 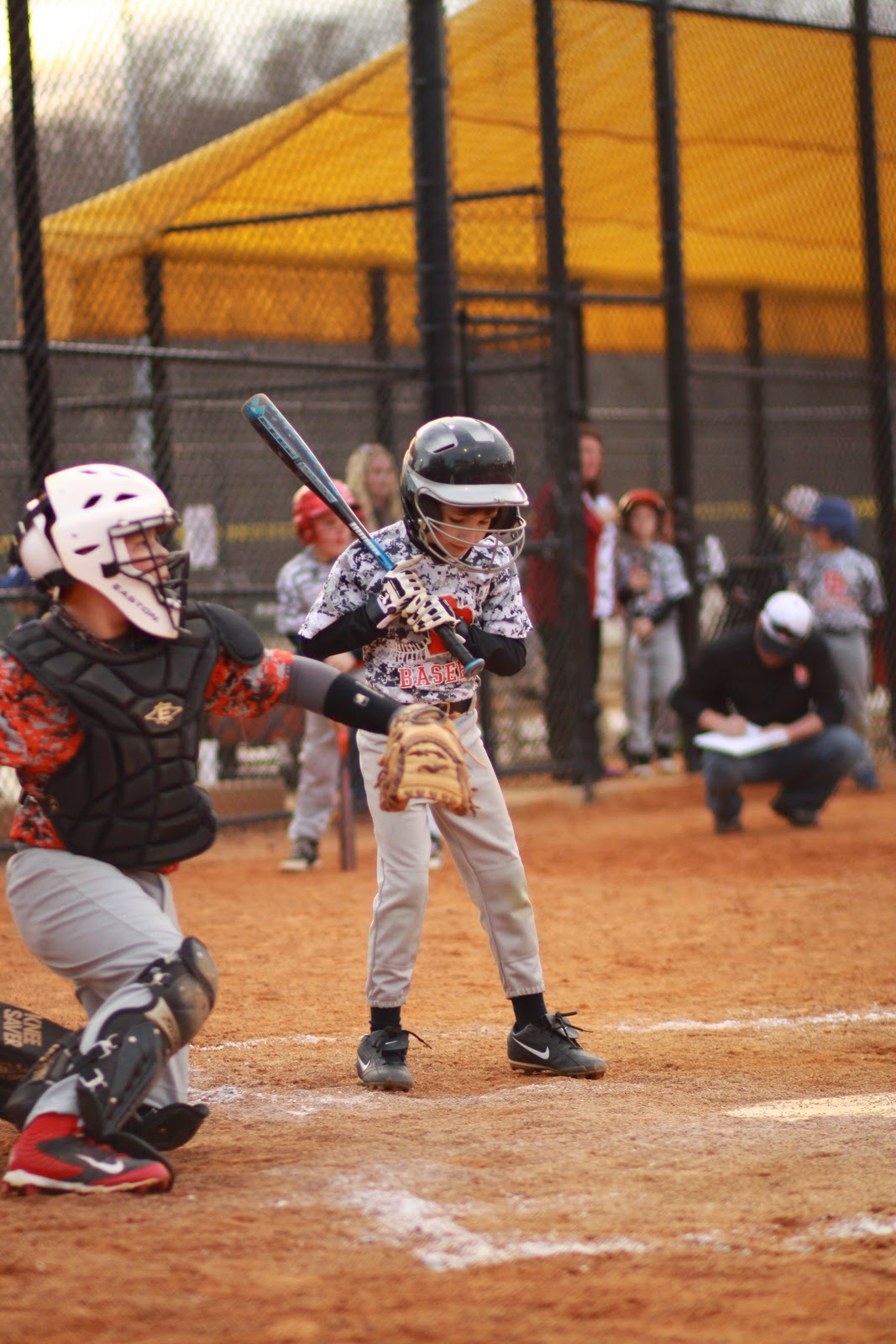 Bless his heart, he is still trying to figure out the difference between a ball and a strike and where the ball needs to be in order to determine if its a good pitch or not. He had 2 strikes and 3 balls going into the last pitch. It was a ball, thank goodness. So, he walked to 1st again. 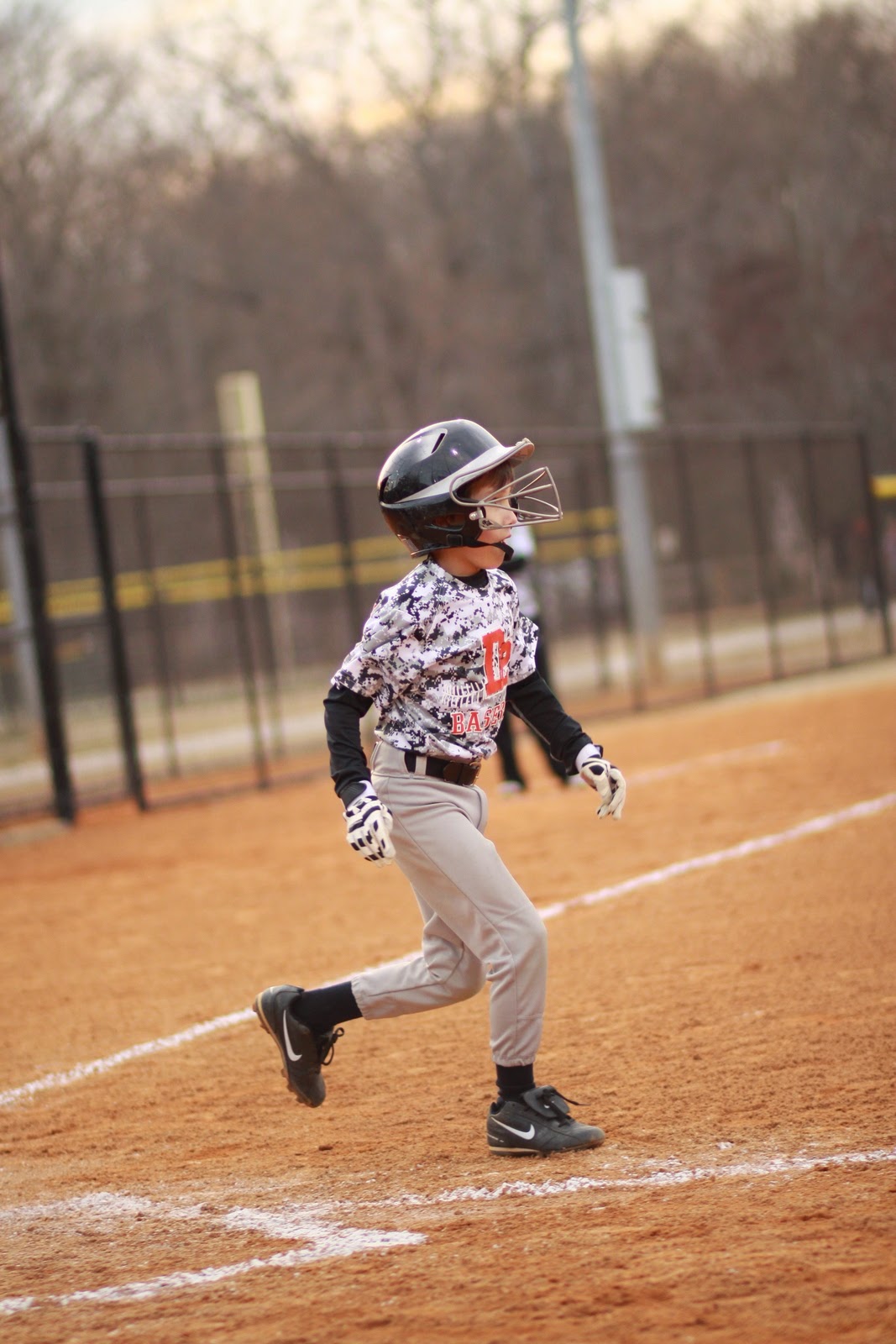 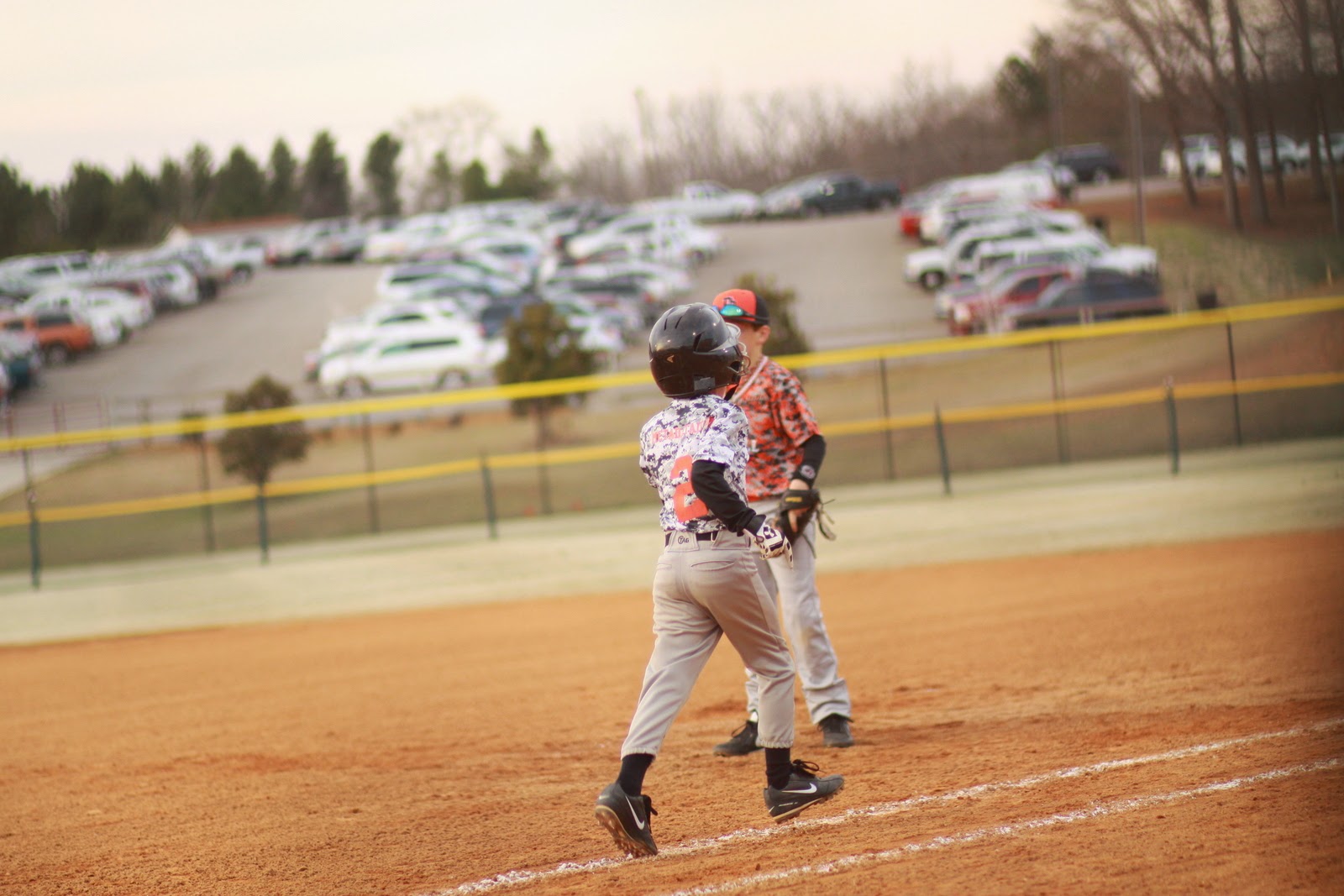 And, like a repeat of the scrimmage, he stole 2nd base, got batted into 3rd, and slid home.

I wasn't fast enough to get a shot since my lens cap was on. Seriously? I was so mad at myself! He's so stinkin' cute when he slides!

Anyway, the team was able to make a small comeback during that inning, but it wasn't enough to fix the slaughter we received in the first inning. I don't even think our coach told us the score. It would have just depressed everyone.

The kids walked away from that game with a lot of homework to do. Unfortunately, I'm not sure when the weather will permit them to work on their skills! And our next game is on Thursday!