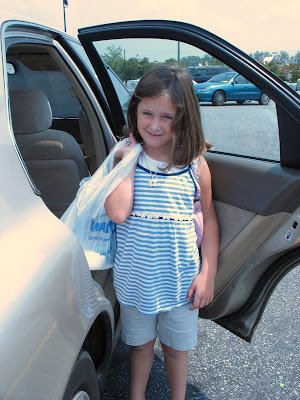 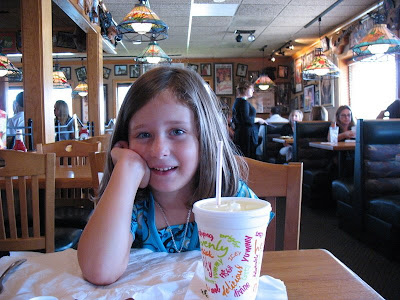 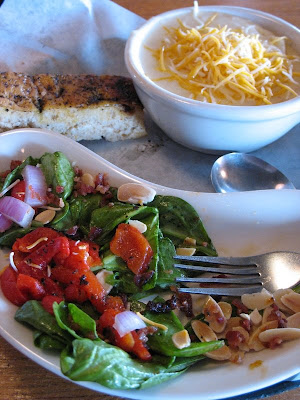 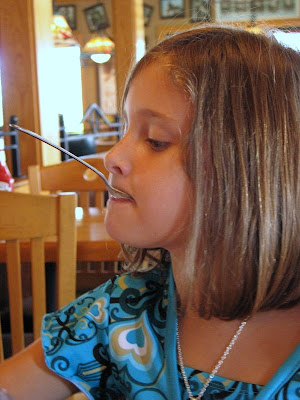 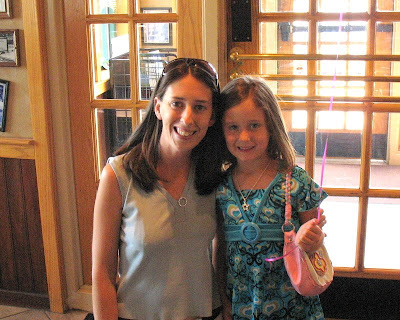 I had this amazing and wonderful day planned for just Jaina and me today. I had planned on taking Jaina to buy a brand new outfit for tomorrow's first day of school. Followed by hair cuts for both her and me, then a surprise lunch at her favorite restaurant, Applebee's. Maybe head on to the Ant's Pants to look around (they've got Hello Kitty stuff there that she loves) and possibly go paint pottery. A full day of just me and her. Jayce was to be watched by either my mom or Monica while I focused all my attention on big sister.

What's that saying about "best laid plans"? Besides it being a B-movie with Reece Witherspoon in it? At any rate, our day did not turn out like it was planned.

First of all, Jaina spent the night at Gray's house on Sunday night, so I had to wait until Gray delivered her back home before starting our fun day. Then Jayce's teacher scheduled a home visit at 10:30 that morning, too. I figured that since my mom had to come all the way out here anyway, she could just keep Jayce for me while I took Jaina out. I didn't realize that she had intended on going to work earlier than her normal 3:00 PM day. I also didn't plan on Gray showing up to my house without Jaina's carseat (she had the extra carseat that she uses for both Jaina and Jayce, but not the booster that goes in MY car). Luckily, it was in Rachel's van and she was not too far from my house. By this time, its after 11:00 AM and I am rushing to get out the door. My child has been home for less than 5 minutes before I am yelling at her to hurry up :( I just hate being rushed! But, we took a slight detour and picked up the carseat, eager to start our day.

We get to Walmart (I know, classy!) and I bite my tongue the entire time, determined to let Jaina pick what she wanted to try on. The problem? She wanted to look at jewelry, lip gloss, Hannah Montana purses, toys, and headbands rather than clothes. Since we were on a time restraint, there was no way I could just let her wander around aimlessly.

We found 5 or 6 outfits (with prompting) and went to try them on. Walmart has some stretchy capri-length pants that I thought Jaina would absolutely love! They had no buttons, buckles, zippers, or anything. They were pretty inexpensive, and came in 3 colors. I was mentally buying them when Jaina declared that they were SCRATCHY! and didn't like them at all. UGH! That girl will not find a pair of pants she likes to save her life! She is going to freeze this winter, I tell ya!

So, she finally picks out a cute dress to wear to the first day of school tomorrow. She'll have to wear shorts under it, though, in case they go on the playground. Next, we tried to pick out new shoes. She tried on every single style that came in a size 12 or a 13 and she claims not a single one fit. The problem with Jaina and shoes, is that she thinks everything besides a flip flop is too constraining. There can be an entire inch of shoe between her big toe and the end and she'll tell you its too tight. Talk about frustrating!

By this time, it was 1:00 PM and I was STARVING! But I told her that she could pick out ONE piece of accessory. A hair thing, a necklace, new earrings, whatever. Just one. She searched for a good 30 minutes. My patience wore thinner and thinner after every minute. She liked everything. She couldn't decide. Then she said, "If I don't pick a necklace, can I have a toy instead?" NO!!!!!!!!

She finally picked out this cellphone lipgloss piece of junk that was on clearance for $2. Whatever, let's just get the heck outta dodge.

After that hellish experience, we went to lunch at Applebee's. We actually had a very nice and relaxing lunch. I had a spinach shrimp salad with potato soup while Jaina chose chicken fingers and fries. Then we shared an ice cream sundae.

As lunch ended, I saw the time was approaching 2:00 PM. So much for our haircuts and fun activity. I rushed home to give my mom a little time to get to work early.

*sigh* Summer vacation is officially over. Tomorrow is the first day of school!
Email Post