All you have to do is look at the pictures to see what Jayce thought of the beach. Oh yeah, he loved it alright. Okay, correction. He LOVED the ocean with all his heart. Hated the sand with a passion. He was okay as long as we carried him from the car to the ocean. Then Jayce would complain loudly, "STICKY SHOES!" after we got back in the car. Couldn't really blame him, I don't much like the feel of sand sticking on me either!

So, the trip was a success. I am not sure if my husband felt the same way after being with Jayce (and his impulses and his tantrums and his moods) 24 hours a day. But it really was. For the first time, EVER, Jayce slept somewhere other than his own bed without a peep from him during the night! He also napped just fine there, which was a big surprise. He also ate, not once but twice, in a restaurant without running around or screaming! (Thanks, Gray, for the matchbox cars!) He ate fairly well there, mainly because we bought all his consistent and approved foods at the grocery store when we got down there.

The problems? Mainly the sliding glass doors (open close open close open close) and the wide-screen TV that not only was in Jayce's reach, but also made a sound when you powered it off and on (off and on and off and on and off and on). Then there was Brian's laptop that he brought. We thought Jayce couldn't open it, so it was safe, but of course we underestimated him again. It is getting harder and harder to "babyproof" for a growing three year old! We had to lock the sliding glass doors and unplug the TV by the power strip. Oh, and hide the laptop :)

Jayce also discovered the joy of miniature golf while we were there. I have to be thankful for the VERY understanding team players ahead of us and behind us. Jayce would rush ahead to the next hole before the team in front of us were done with their turns. Then some holes Jayce would refuse to leave and prevented the team behind us from their turn. All in all, he did great. Until the tantrum at the end where he didn't want to leave! :)

The car ride was fairly smooth as well. And we did it without a DVD player! (darn it, I was hoping the kids would act horribly so we'd get one finally!)

Here are my favorite pictures of Jayce: 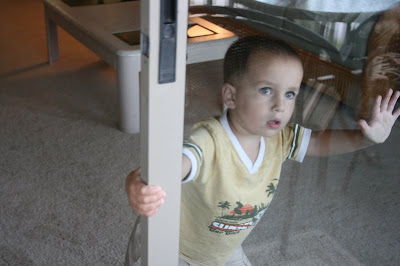 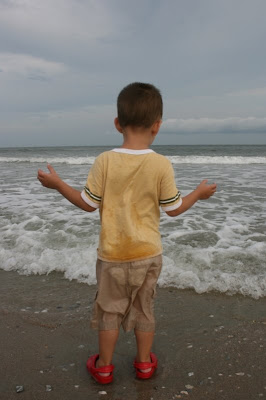 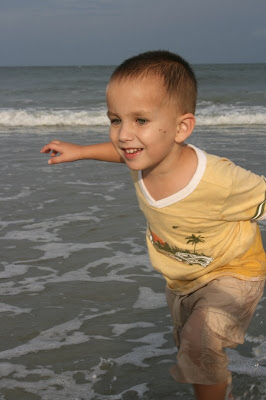 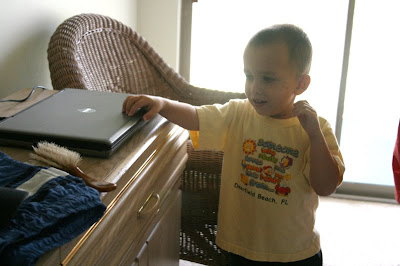