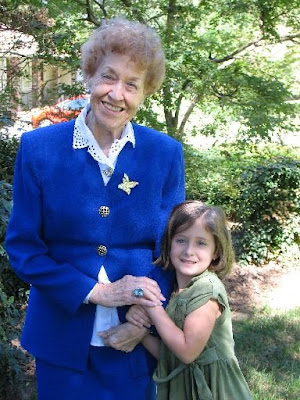 My stepmom just emailed me, informing the family that my Aunt Liz will be picking up Grandma Staska from her current home in Tucker, GA and taking her to live with her family in Utah. I'm speechless. But more importantly, I am feeling huge amounts of guilt. See, we were supposed to go down to see my Grandma last month (Brian, too!) but the kids woke up with stomach bugs. We tentatively rescheduled for this coming weekend, but I never did get my act together to plan anything. I just took it for granted that my Grandma would be there 6 more months, like she normally is. But this year has been anything but normal. Grandma has Alzheimer's Disease, which is increasingly getting worse. Its been harder and harder for her children (My dad, my uncle david, my aunt liz, my uncle Joe) to take turns taking care of her. There's been much talk lately of finding a rest home for her. But where should she be? Florida, Georgia, or out in Utah? When family is split between states, its hard to know where the best place would be.

I miss my Grandma already. And I should have made more of an effort to be with her while she was in Atlanta.
Email Post