As most of you guys know, my kids both had a huge bout with viruses these past two weeks.

There was one day, however, that Jaina felt pretty good. This was in between her croup virus and her strep/bronchitis episode. I *could* have sent her to school that day, but she would have had to take a spelling test that she wasn't prepared for in the least (not after having a high fever and horrible coughing spells at night all week long!)

So, we made it a "skip day" instead. Except I didn't tell her it was a skip day. I told her she needed "just one more day to recover" and that was good enough for her.

After dropping Jayce off at school (this was between croup and before Fifth's Disease) we went to Walmart and got a brand new My Little Pony that her daddy had promised to buy her the day before but didn't follow through on. Her name is Star Song and she was only $5 and came with a DVD, so it was a good deal.

Then we went to the Post office for stamps and to the bank to deposit money. Its SO nice to run errands without Jayce. Jaina actually helps as opposed to hindering, like her little brother does.

Jaina's pick next was to go to Waffle House for breakfast. She LOVES Waffle House, but we hardly ever go. Ah, Waffle House. Its a southern institution. Not to be confused with Huddle House, that is entirely different. Waffle house and I have some great memories from high school, college, and following bands around. So, it is kinda weird to be taking my 6 year old there at 9:00 AM when I used to go at 3 AM after a late night concert!

Anyway, Jaina's eyes were bigger than her stomach. She ordered a waffle, hash browns (plain and not scattered) and an order of bacon. I had my usual... hash browns scattered, covered, and chunked. And then I ate the rest of her food.

After breakfast, we went to the newly renovated library in town and checked out the new building. 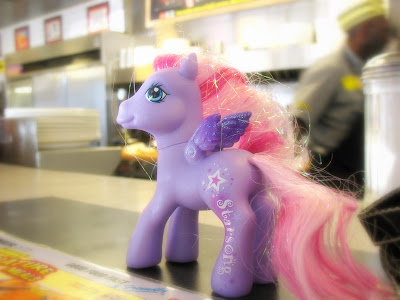 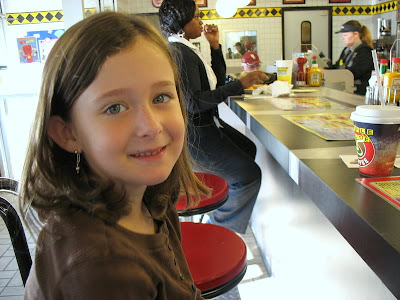 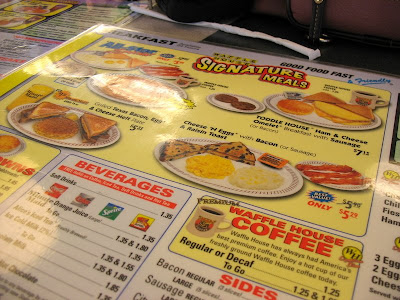