He's already mastered goals in some of the above skills, like snaps and lacing cards. He's about to master socks and shoes, too. Buttons and zippers continue to be a problem (which really isn't that inappropriate considering he's only 4) so we practice all the time.

Today's trial: Zippers. Not just any zipper, but the one on his red Old Navy jacket. This one is a toughie (as we would say).

Its tricky getting started... 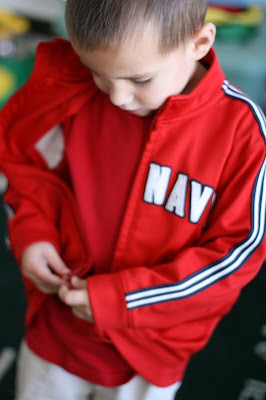 Remember to hold the bottom of the jacket once you get the metal threaded... 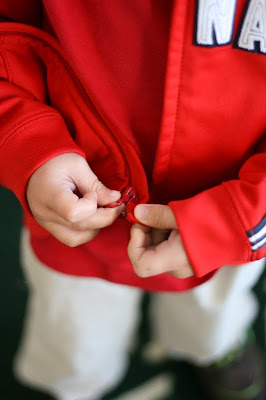 Now to pull it up. 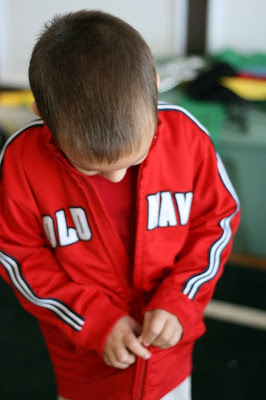 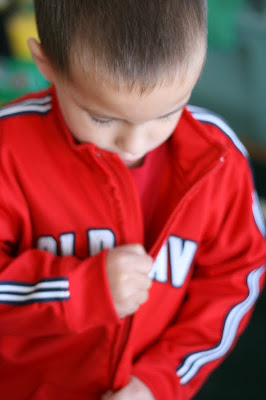 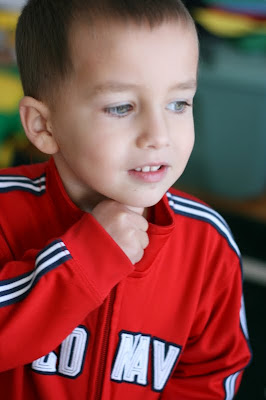 All done! My boy is so proud! 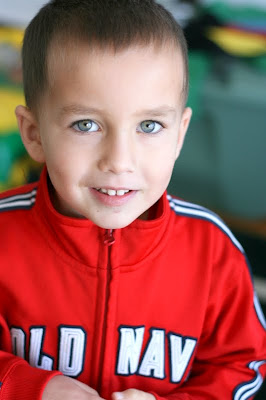 Jayce likes to wander in and out of the bathroom in the mornings while I get ready. He's come close too many times to accidentally touching my hair straightener while it is heating up. I always take these moments to verbally remind him that it is HOT and he will get BURNED if he touches it. So, the other morning, he walks into the bathroom, looks at me straightening my hair and exclaims, "No Mommy! Don't touch! You're burning your hair!!!"

The other morning, Jayce was super excited as we were getting ready for MOPS. He could barely keep his energy contained once he was buckled in his car seat. As soon as we were on Old Furnace Rd, he strained against his seatbelt for a first glimpse of the building. Finally, he saw the steeple. "LOOK! It's the Church of the MOPS!"

In Jayce's special needs pre-school class, the children enjoyed carving pumpkins open to see and feel what was inside. Jayce especially liked putting his hand inside the pumpkin (What a change from last year!) and told his teacher that he had pumpkins at his house. His teacher reported that he also issued her the following invitation, "You can come put your hand inside MY pumpkin sometime".
Email Post
Labels: jayce funny MOPS OT