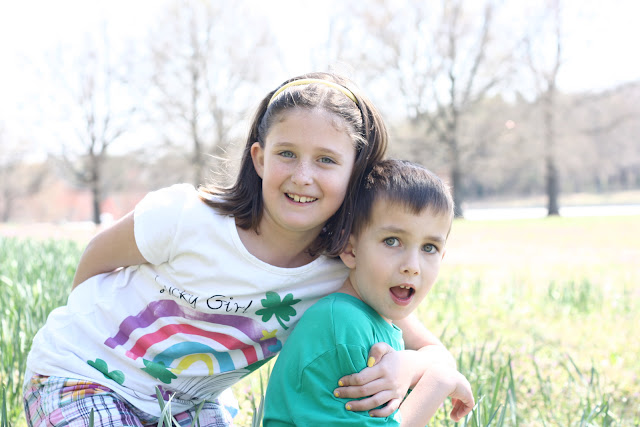 Life's been moving at the speed of light lately! I feel like I have so much to say and document, but no time to be chatty.

Here's what's been going on in a nutshell:

-The kids celebrated St. Patty's day by our traditional trip to the duck pond. Jayce was scared of the ducks this year! Oh, and of the bees. Even though I didn't see any. I had to carry him to the car! And he's getting heavy!

-Oh! And we made pillsbury slice and bake cookies with shamrocks on it.

-Brian and I went out that night with our neighbors plus their relative from Indiana. We ate at the local Irish pub, listened to a local band play Irish music (where was my original Jump Little Children when I needed them?), and I watched as my husband and neighbors drank Guinness, Green beer, Irish Car Bombs, and Jagermeister. Not sure the last thing had anything to do with Ireland. Except that it comes in a green bottle.

-I was the designated driver. Although everyone else took Friday off from work, a mother's work is never done and I don't get "days off".

-Jaina, her friend Aaliyah, and I joined Monica and Tracy at the Tarpon Sharks show on Friday. Synchronized swimming is fun to watch! :)

-Jayce has been having some issues this week with behavior. Too tired tonight to go into details, but I may do that later this week. Hopefully its a short lived phase!
Email Post