The year was 1997. I was a freshman at Converse College in Spartanburg, SC. I had made so many great friends in the first weeks of school. Most importantly, my best friend Farrell. She sat behind me in my calculus class with Dr. Dunbar. Or did I sit behind her??

Anyway, it turns out that Farrell and I shared many common interests. We went to neighboring high schools in the Atlanta area. We attended the same football games when our schools played each other. We had mutual friends we didn't even know we had. And we had very similar tastes in music and had even attended some of the same concerts back home.

When Farrell's friend Rachel Kennerty invited us to come home with her to Charleston for the weekend and attend 96 Wavefest, of course we said YES!

It was gross and wet and cold. Not great conditions for an all day outdoor concert festival. 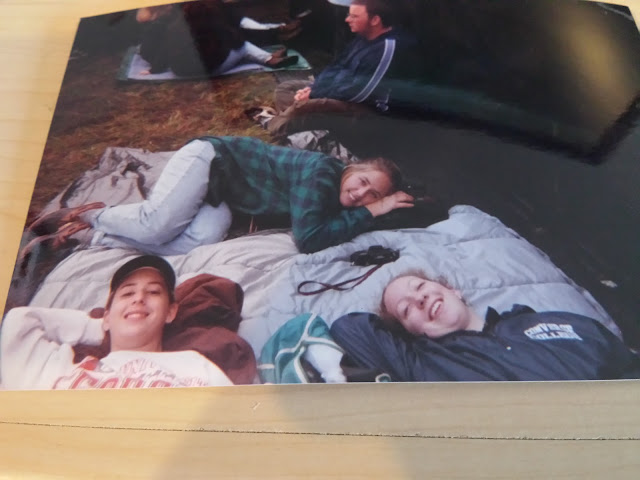 Farrell and I were excited about Ben Folds Five and Cowboy Mouth. Rachel Kennerty was going to see her favorite band that no one had heard of: Jump, Little Children.

They were one of the earlier bands and when they took the stage, I had to admit they were good. But when Jay started to sing "Quiet"? That's the moment I fell in love.

Rachel made both Farrell and I a tape copy of her Licorice Tea Demos cd, which was JLC's first official release if you don't count The Original Demo Tape. Which, all good fans count that :)

I have to admit... as soon as "Someone's In The Kitchen" came on my stereo, I wasn't impressed at all. I thought Jay sounded a bit like a cross between Aaron Neville and James Taylor. Both of which are singers my mother likes. Ugh.

So I fast-forwarded my tape to "Quiet" and just listened to that over and over again.

I can't remember exactly when I started listening to the whole tape. But I did. And when Rachel Kennerty asked if Farrell and I wanted to go see the band live again, we jumped at the chance. And so our love for following Jump, Little Children was born. Neither Farrell nor I had our own vehicles Freshman year, but you'd better believe we worked hard that summer to buy our own cars for Sophomore year. And the sole purpose of those used Honda purchases was for following JLC around the Southeast. 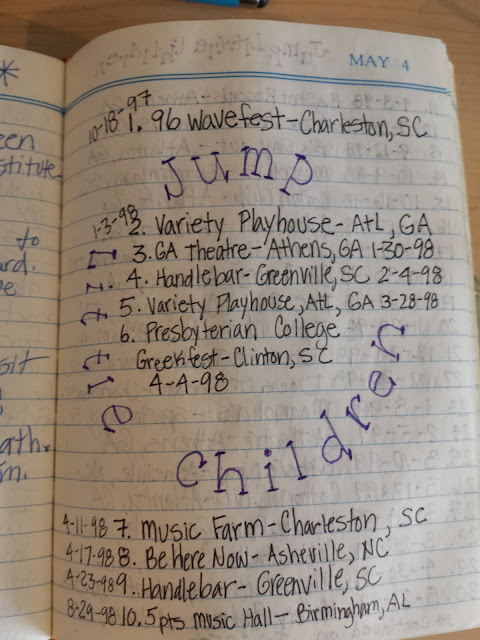 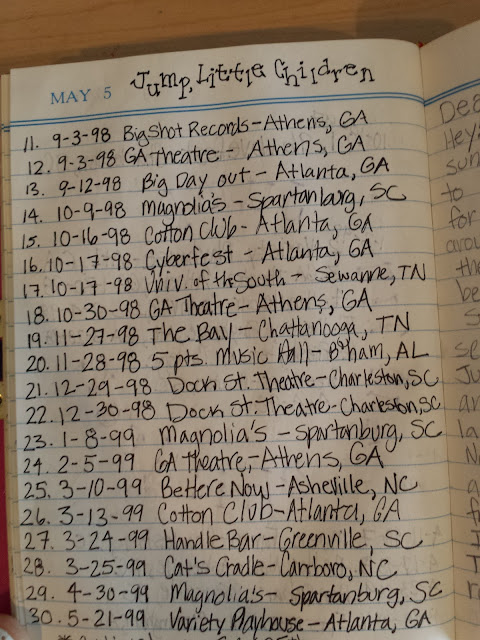 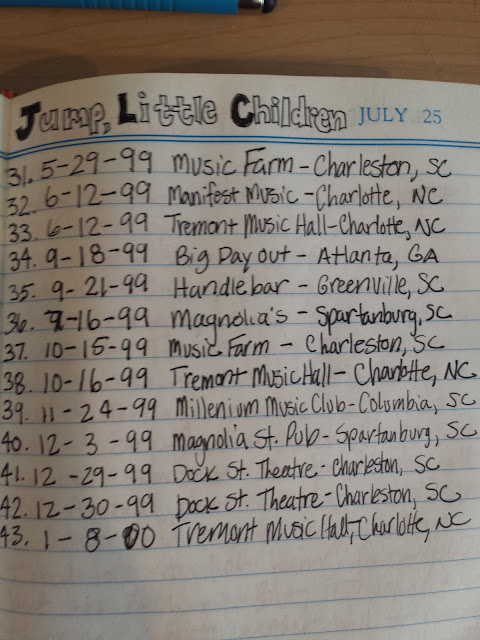 I quit writing down my shows because I quickly lost track of them. Oh, and by the way, I actually went to college during this time and completed a degree in Psychology. I graduated May of 2001 and met my current husband Brian two months later in July. I dragged him to a couple of shows at The Handlebar in Greenville. He was not impressed with Jump, Little Children. He's kinda lucky I married him anyway.

I wrote about joining Opium here in a blog post.

I can't even begin to explain what the JLC/Opium community did to shape my life. I made some absolutely wonderful friends. Sorry for the crappy cell phone pictures of crappy 35 mm point and shoot pictures with flash :P I certainly was not a photographer back then. But I do credit the band for getting me interested in photography! 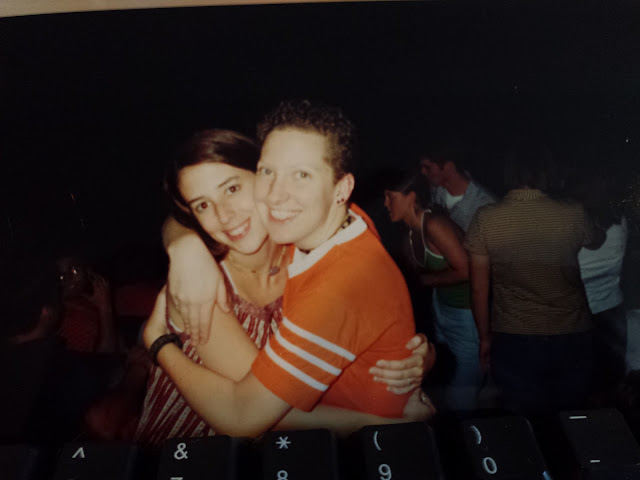 Farrell was my road tripping buddy for the majority of the shows.

Long before I started my blog, I did traditional scrapbooking. When you don't have pictures of little kids to scrapbook, your favorite band makes a great subject! 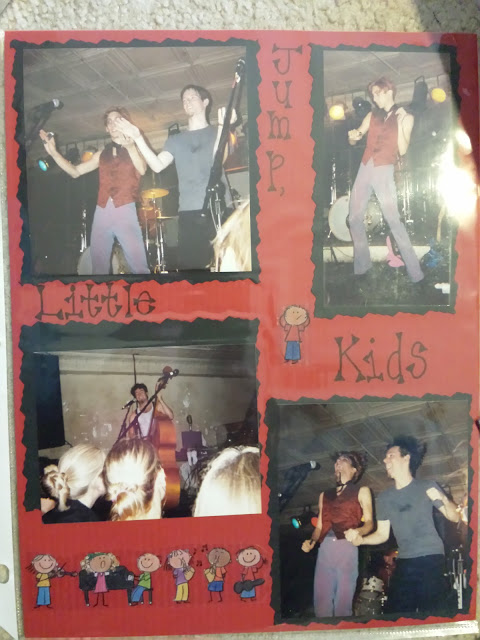 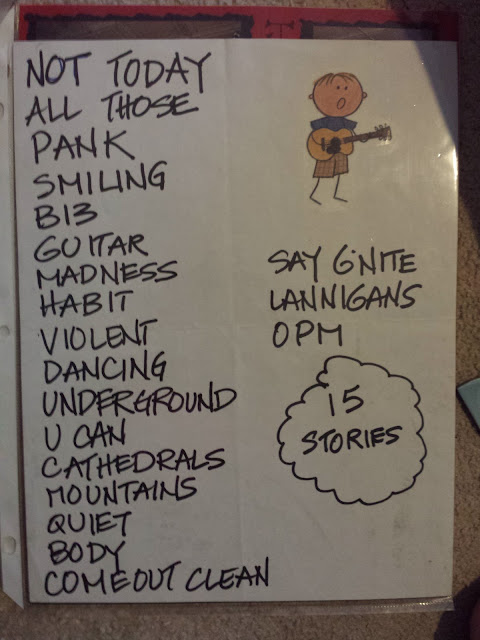 I would kill to hear that set list again. Madness? Mountains so Grand? Quiet? Smiling Down? Lannigan's Ball? 15 Stories? Opium?? Those were definitely the days of the awesome shows. Half of those songs were never ever recorded in the studio and all that exists are bootleg copies of live shows. Thanks to my friends Chris, Kip, and Mike, I have a few of those :) 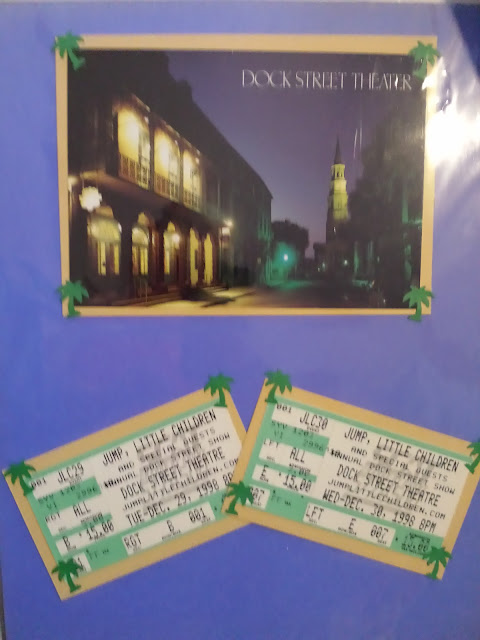 I loved everything about this band. Their music, their talent, their personalities, their energy. Their fans. Everything. 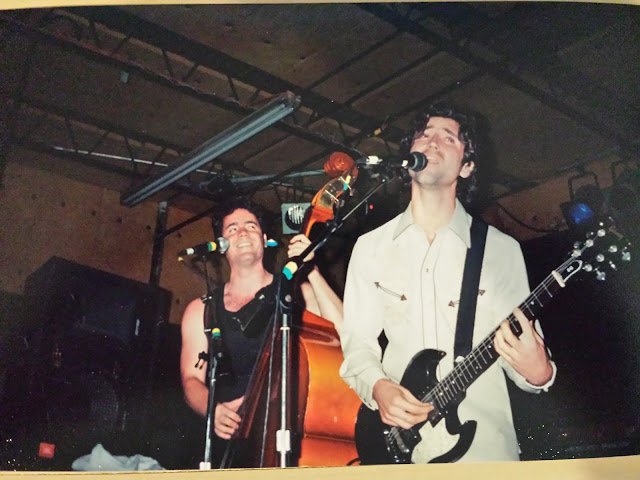 My last show was at a small venue in Greenville (Maybe the Warehouse Theatre?) and I took my 18 month old daughter Jaina with me. It must have been November of 2003? I remember it being cold. Jaina did fine during the performance but the stage hands at the venue were really nervous about a toddler so close to the stage, speakers, and cords. I let her run around in the back until the middle of the show and then I just left. I had no idea that would be my last JLC show of their tour.

In 2005, JLC made the decision to disband. They played a final farewell tour and ended their career at their famous Dock Street shows between Christmas and New Year's. By that time, I had given birth to Jayce earlier that Spring and was in no position to drive to Charleston and leave Brian with a baby who would not drink a bottle and cried all the time.

I was officially an adult. Married, small children. No time or money to follow bands around any more. As much as I hated missing that last Dock Street show, it just wasn't in the cards.

It's funny to think about now, but I made all new friends when I became a mom. All of my college friends immediately associated me with JLC and I'd like to think I helped spread awareness for their awesomeness around Converse College. But none of my new friends knew about my groupie life, which felt weird. I mean, it was a HUGE part of my life and then it was just gone?

On March 14th, 2015, the band updated their FB page with a rather cryptic picture directing you to their website that only displayed a countdown timer. It was pure madness when everyone realized what the timer meant: A reunion show!! No... not a show. A TOUR!!! Aptly named Church and Queen commemorating the two streets in downtown Charleston where JLC used to play.

Tickets went on sale on May 18th. I sat at my computer upstairs refreshing my browser until 10:00 AM on the dot. I was able to buy two tickets to The Music Farm on Dec. 30th in Charleston. Dock Street tickets sold out almost immediately :( But I was happy that I had gotten some at all. Many others were not so lucky. Some of my friends posted that they had sick kids at the doctor at 10:00 AM or they were in a business meeting and couldn't log on. It certainly is quite a different group that JLC fans are now.

My friend Nessa scored 6 tickets for her and her family. They were able to give me one for the show on Dec. 17th and I traded her one of my tickets for Dec. 30th.  I was super excited to be able to see them twice, but also sad because Farrell would be visiting the United States in September, not December when the shows were.

Farrell and Petra have to change their plans and plane tickets from Germany to Atlanta due to medical reasons. Their new arrival date? Dec. 14th!!! Although tickets to the Terminal West show in ATL sold out in about 15 minutes back in May, I was able to score two tickets for my friends thanks to the Jump Little Children Ticket Exchange FB group. As soon as the tour was announced, all of the fans created a new Opium internet hangout and were soon posting old pictures, reminiscing about old shows, and reconnected with old friends. It was so good to be back!

I drove to ATL at noon on the 17th to meet up with my best friend: 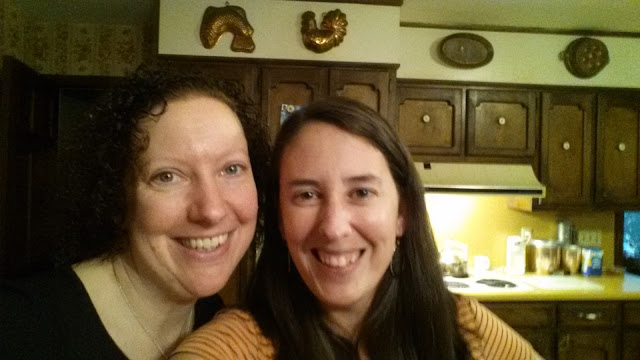 And then we met up with Nessa, Lindsay, and Chris for dinner before the show. 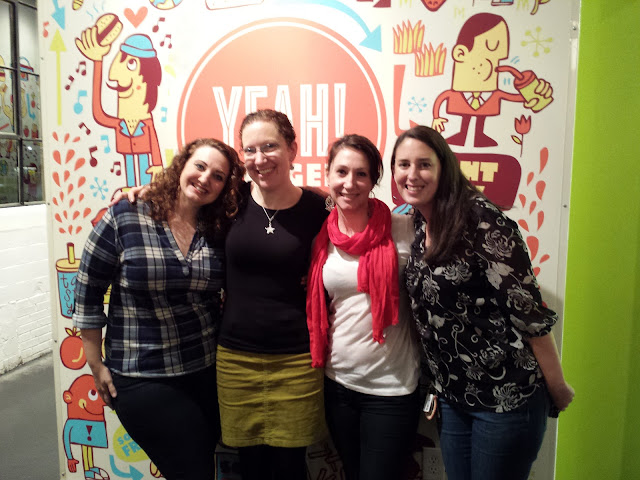 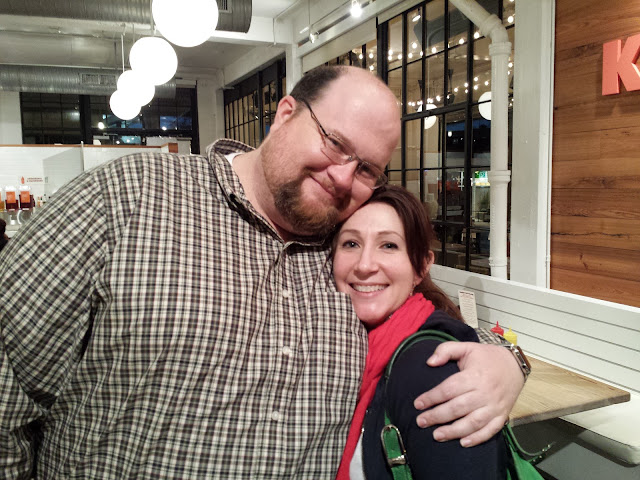 I struggled with the decision on whether or not I should take my DSLR camera. I ultimately decided I would regret it if I didn't. I loaded my lenses in my Shootsac and kept my camera body in my hands pretty much the entire time. Nessa and her family got a great spot in front of Ward (cello/guitar) but Farrell, Petra, and I hung back with Chris by the soundboard and bar. Although I appreciated not being amidst the crowds, this did make taking pictures that much more difficult. 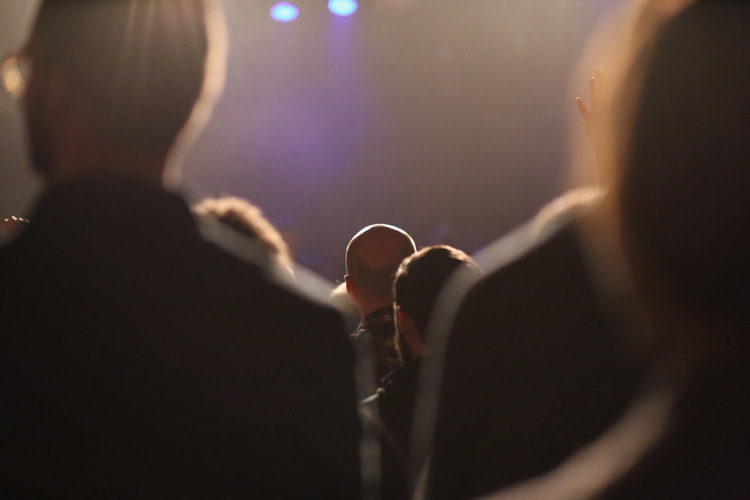 I finally figured out that I could focus on the band members through the spaces between all the heads and then lock that focus while lifting my camera above my head. That is how these following pictures were taken. 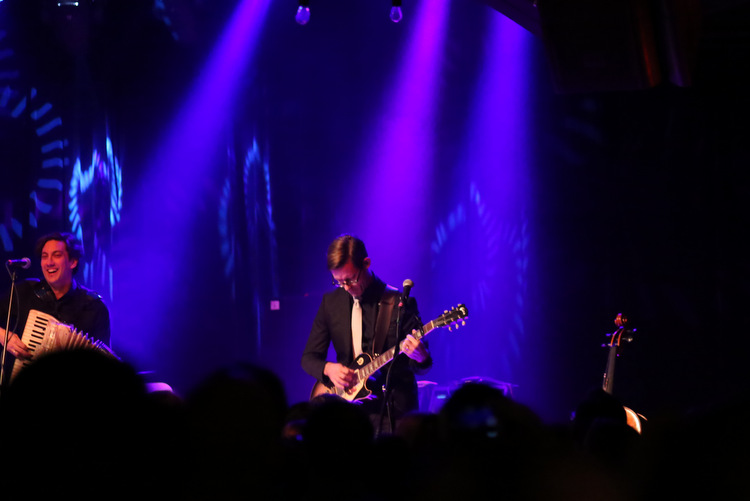 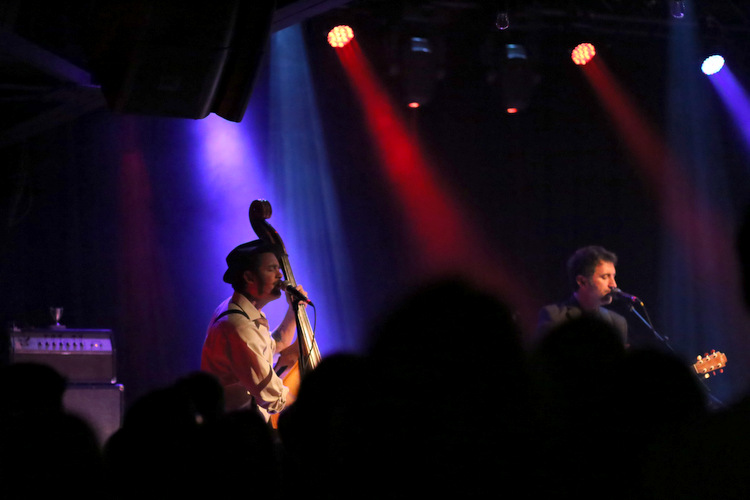 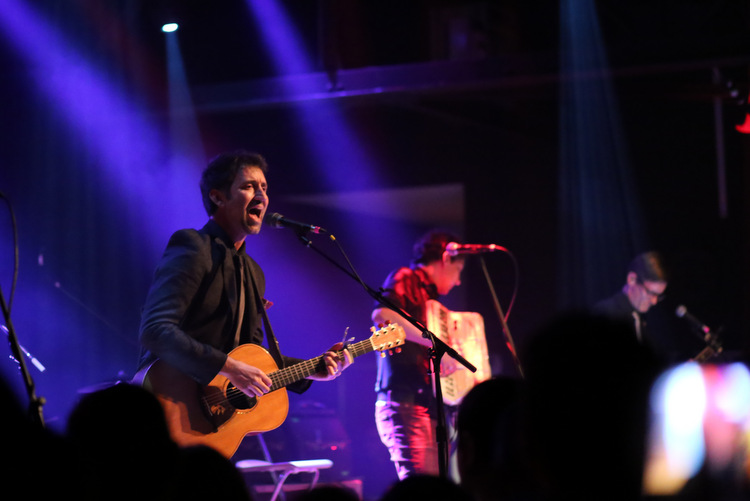 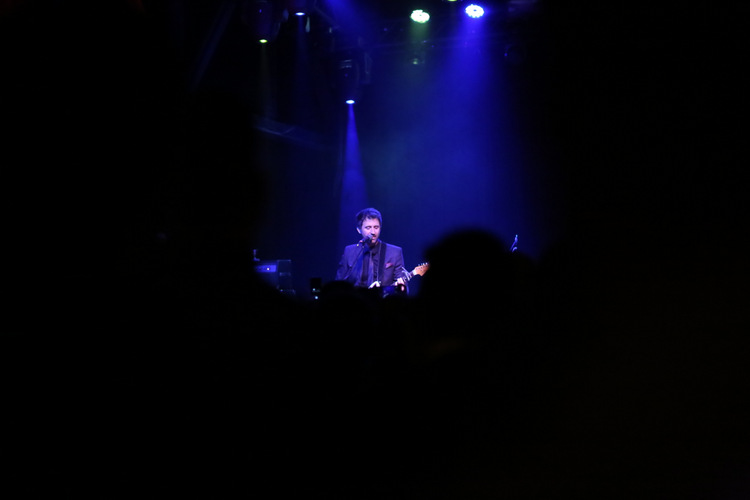 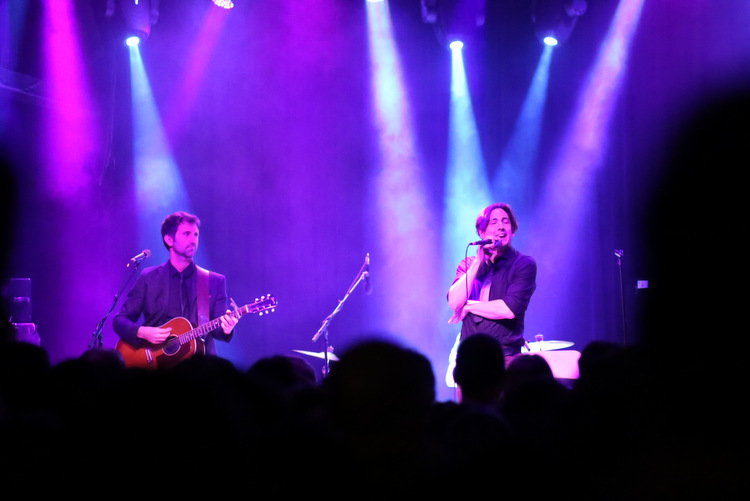 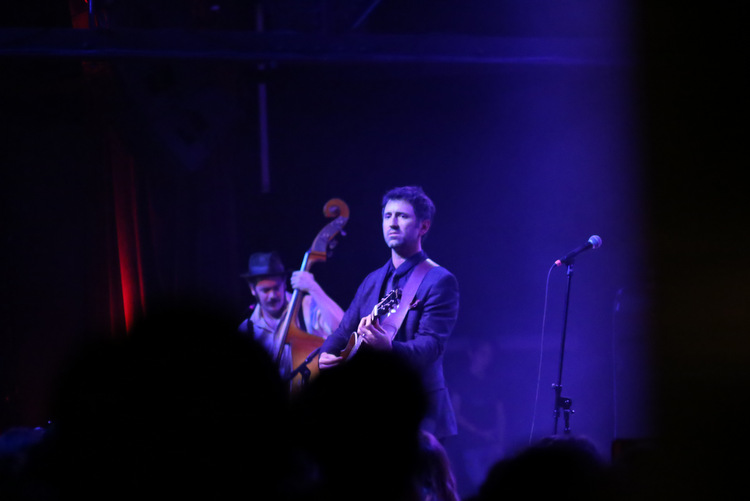 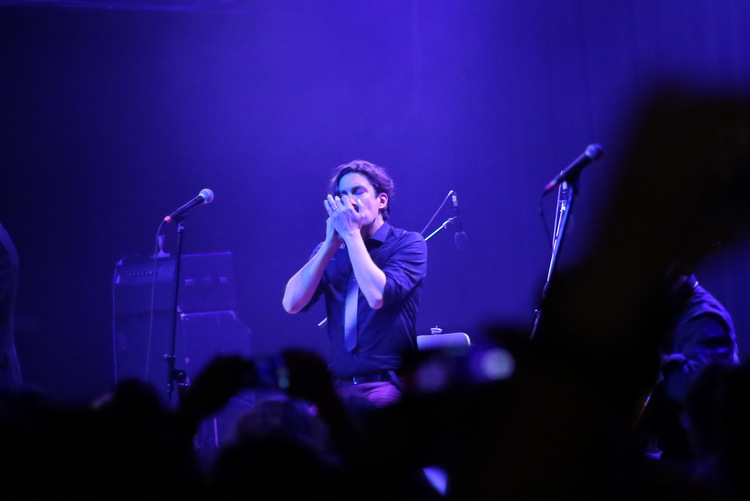 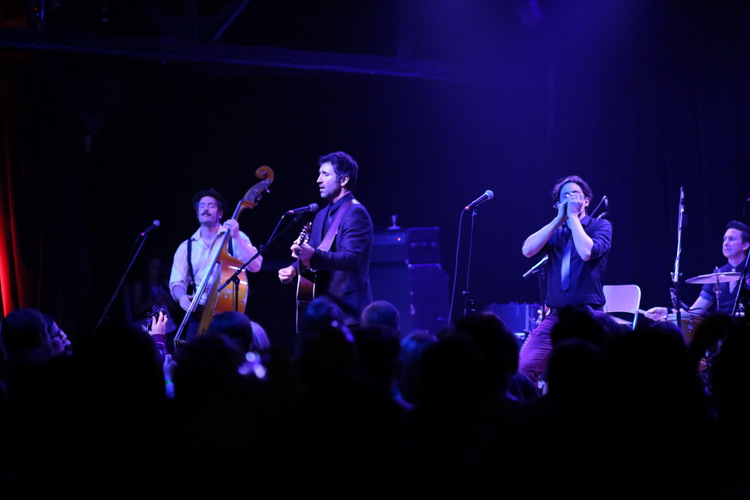 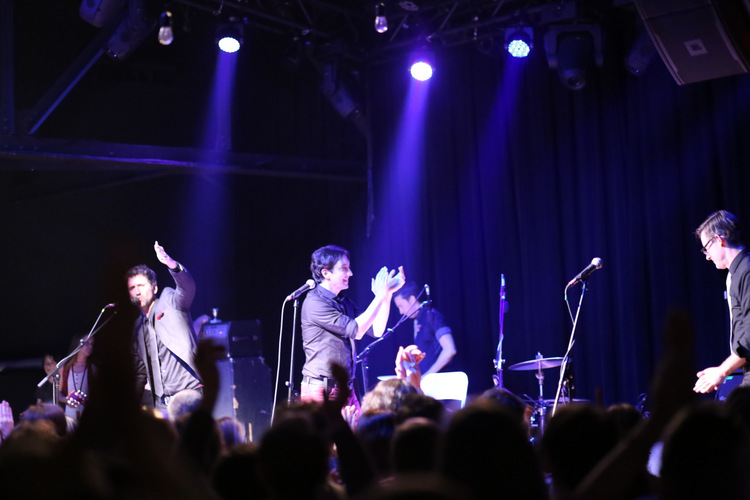 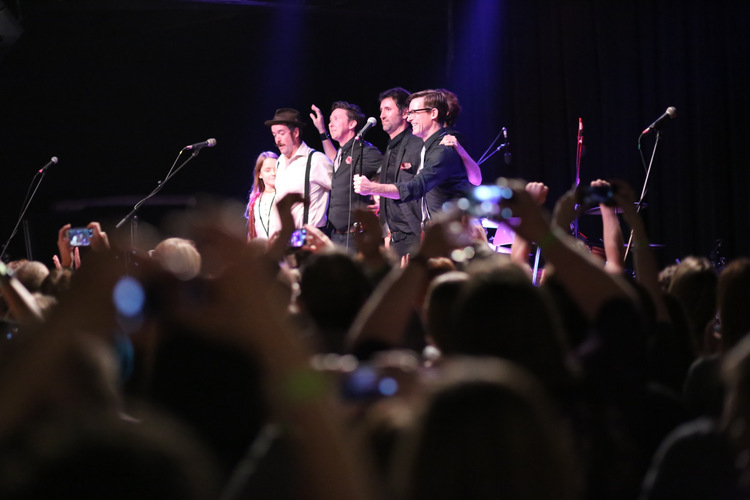 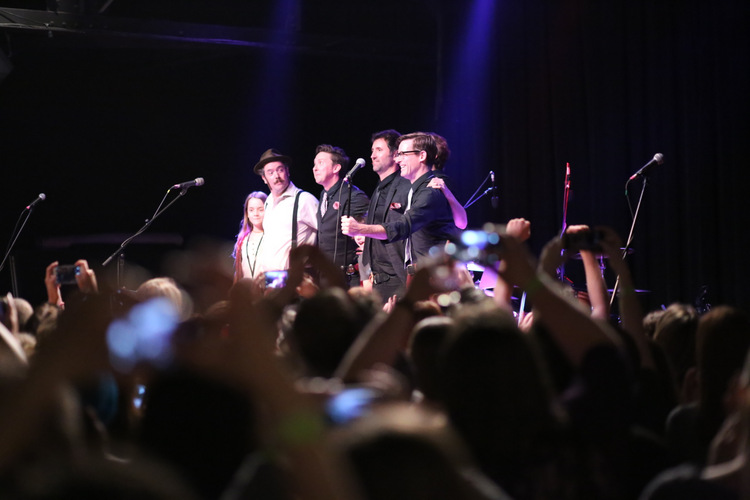 Afterwards Farrell and I had decided we were too old to hang around and meet up with the band. We were tired (she was on Germany time!) and my feet hurt. (Note to self: cute boots do not equal comfortable boots!). We had to go and find Nessa and family to say goodbye to and we ran into both Ward and Matt. I didn't even think to get a picture with my camera. Doh!!

The guys in JLC were completely blown away by how much their fans still care about them, both as individuals and musicians. This band inspired marriages, friendships, careers, relocations to different cities, you name it. They knew what that time in their lives meant to them, but never on earth thought that we all felt the same way.

I was looking forward to the Music Farm show last night, but unfortunately a family emergency prevented me from driving to Charleston yesterday. I'll update on that when I have been given permission to share from that family member. Just know that any good vibes you can send my family would be appreciated right now.

I am incredibly thankful to have gotten to even experience one show on this tour. And the hugs from all my old friends was definitely worth it :)

Want a sample of some JLC live? Click on the videos below.

Dancing Virginia: (Jay forgets the words in the 2nd verse and it's awesome!)


An acoustic unplugged version of Where She Lies: