Whenever anyone asks me what the toughest thing is about parenting Jayce, I quickly respond, "His feeding issues!" without blinking an eye. If I could make just one symptom of his autism go away, it would be his sensory issues related to his food intake. Really. Its just that important to me for him to eat nutritious food.

For those new readers that might not know his background, Jayce stopped eating all foods except pancakes one day when he was 17 months old. I'll never forget when it happened. I came home from working as a photographer at the Picture People to Brian telling me that Jayce didn't eat his dinner that night. "Oh, he must be getting sick," I said. The next morning I tried to feed him yogurt for breakfast. He cried and acted like he couldn't even use the spoon to feed himself (which he had been doing for months!). For lunch, he wouldn't eat anything either, so I fixed him pancakes on a whim. He ate 3 like he had been starving. When I got home that night, Brian said he wouldn't eat his dinner AGAIN and he had cooked this rice dish with veggies and chicken that Jayce normally scarfs down. That was the beginning of the end of Jayce eating protein, rice, pasta, fruit, vegetables, and yogurt. All he would eat were pancakes.

At the insistence of his pediatrician, we stopped letting him eat pancakes at age 26 months. We gave him every opportunity to eat anything else he wanted, but the only thing he ate was a little bit of shredded cheese and some slices of white bread in 6 days. THAT'S when I knew that something was definitely not right. He'd been on reflux medication since infancy, but my first thought was that eating must hurt. But after I took him for his first Occupational Therapy evaluation and someone explained what Sensory Integration Dysfunction was, it all made sense. Coupled with his low oral tone, and his delay in fine motor skills, and his aversion to getting messy, Jayce just would not eat regular food anymore. Its like he just couldn't get past it, no matter how hungry he was.

Now, at almost 4 years old, he has made TREMENDOUS strides in the area of feeding. I attribute the majority of his success to his feeding therapist Candy who continually goes to conferences and lectures about children with autism and found the latest approach to work wonders with Jayce. All we do in therapy now is play with food. We put chicken nuggets to sleep on our shoulders. We drive cars through peanut butter. We build snowmen with cheese cubes. We feel "worms" on our hands from chicken noodle soup, and we roll peas across tables. And every once in a while, the food becomes "safe" for Jayce to try a bite. There's no forcing, there's no coercing. Its all about making food fun and safe.

Here's a list of the food that Jayce has tried recently either at home or at therapy:

I can't tell you how good it feels for him to be making progress in this area! He now sits with us at dinner and attempts to eat whatever we put on his plate. Yeah, he still likes his pancakes, but doesn't ask for them near as much! 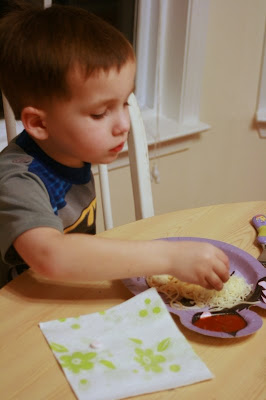 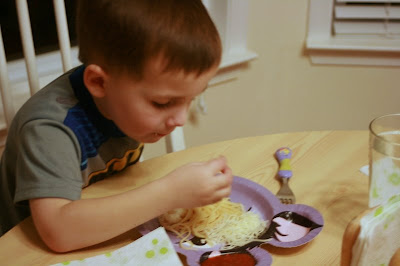 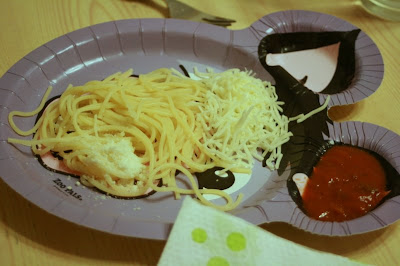