Its not easy being green

Last night, the entire family was awaiting St. Patrick's Day with eager anticipation. We laid out our clothes, making sure Jaina and Jayce had matching jeans on for pictures. Jaina traded her hot pink earrings for some more Irish-friendly. We located our four green beaded necklaces that were purchased a few weeks ago in preparation. We read a new book on leprechauns from the library. We planned our St. Patrick's day meal; some cabbage soup and Irish soda bread.

But today didn't happen as planned at all.

Jaina woke up with a bad headache and a slightly queasy stomach. I let her rest on the couch with some tylenol in her system while I got Jayce ready for school. Jaina felt slightly better and expressed interest in going, so I took her in late, after dropping Jayce off first.

When I went to pick Jayce up, his teachers were concerned that he was getting sick. "He's just 'off' today. He's laying his head down a lot and not talking. And didn't eat his snack." I took him home and he seemed droopy, but not too sick. He drank some soda in a green cup on the couch. 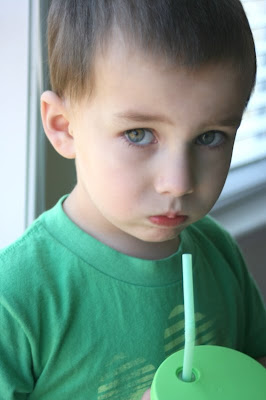 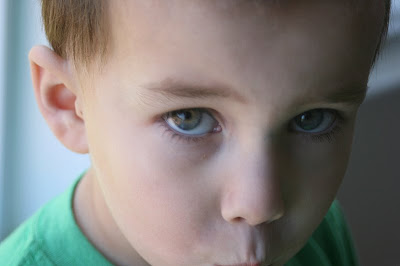 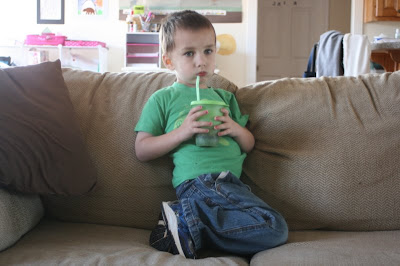 I asked him if he wanted to go to Talon's house for a MOMS Club lunch and he got very excited! "Miss Michelle (Talon's mom) likes Jayce," he said. She sure does :)

So, we went to the MOMS Club potluck lunch and had a great time. Jayce played well with Talon and also with Nicole's son Colin. He didn't want to eat anything, but that's normal for Jayce. He ended up asking to eat some cheese crackers in the car when we left.

We left about quarter til 1:00 to hightail it over to SRMC for therapy. He was fine in OT. But when he got to ST/Feeding, he just melted before our eyes. We cut the session early and as soon as I put him in the car, he was sound asleep.

Acting on gut instinct, I drove him straight to our doctor's office. They were completely booked up solid today... and tomorrow, too. They said I could wait to be worked in, so we did. 2 whole hours in the waiting room with no toys or anything to keep us occupied. For the first 30 minutes, Jayce laid lethargic in my lap. But then he got a second wind and kept me on my toes for the rest of the wait.

As soon as we got into the exam room, Jayce vomited all over me. Yuck. Luckily I was wearing black and was able to wipe the majority off. But the doctor was puzzled about his symptoms. It wasn't acting like the typical stomach bug virus that is going around. He doesn't have strep, nor the flu. We left the doctor's office very puzzled. And he threw up, yet again, on the way home.

We quickly picked up Jaina at the art center. She drew and colored this amazing picture of a Leprechaun without any help or stencils or anything. I couldn't wait to take a picture of it and post here. And then she promptly gave it away to her best friend Ashlan while dropping off some homework at her house. Oh well!

When we got home, Jaina reminded me that I never took St. Patrick's Day pictures of her and Jayce. Yeah, no kidding. I couldn't exactly proceed with my photoshoot that I had all planned out in my mind. But she wanted her picture taken, so we went outside and did our best. You know, I love backlit sunset pictures that other people take, but I have definitely not mastered the art of taking them myself yet. But I think Jaina's cute anyway :)

We're going to try to do our "Irish" stuff tomorrow instead. Better late than never! 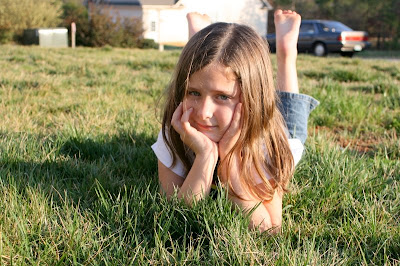 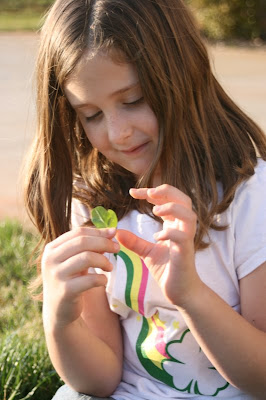 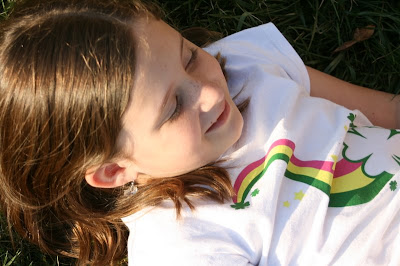 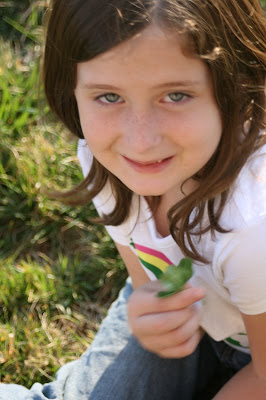 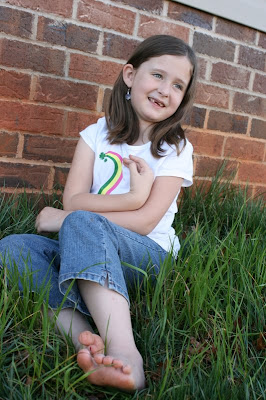 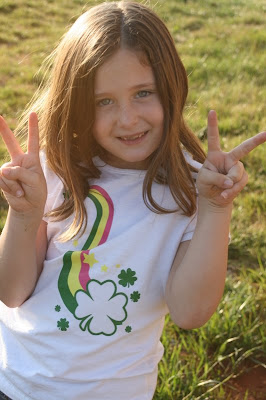