Ever since Jayce started school in the Fall, we've seen a huge increase in Jayce's ability to play pretend. Its not that Jaina didn't try her best to teach Jayce all along, its just that Jayce didn't really want to have anything to do with Jaina for the most part. Not anymore! Now he follows her around like a typical little brother wanting her to play with him. Jaina loves this because he'll basically do whatever she says. :)

They play school, they play elevator, they play baby, they play dog, and they play horsey. On his own, Jayce likes to play kitchen, cooking popcorn and hot dogs in the play microwave. He also has a pretend washer that he likes to clean on certain pair of socks in.

But I've never seen him take care of a doll before!

I was folding laundry in my bedroom (excuse the messy clothes and the huge donation trash bag in the back ground) one morning and in walks Jayce with Jaina's baby doll in his hands. He put her on my pillow on the floor and gently put a changing pad on her for a blanket. Then he tried to feed her a bottle with an old baby bottle from when Jaina was a baby. Then he said she was crying, so he got her a tissue to wipe her eyes. 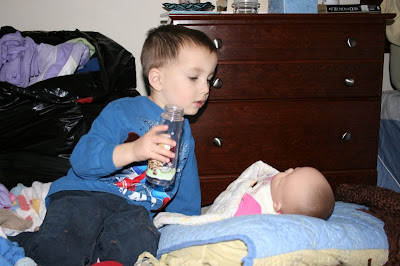