The Lake in January

Insomnia can be beneficial sometimes. Like when you have unlimited time to finish up the book you are reading or computer work that has been weighing on your mind. I could either be laying in bed for hours, tossing and turning while bothering my husband who hates it when I toss and turn, or I could be up here actually getting stuff I want done accomplished. I wanted to finish posting pictures of our park by the lake excursion that happened Tuesday so here ya go!

Thank you so so much, to everyone that compliments me on my photos. I can't begin to tell you how much that means to me. I've told myself over the years, "I'm a confident person! I do not need to rely on others to make me feel good about myself." Which is true to a small extent. I do believe I am a good wife and mother despite not hearing so from my husband or kids very often (more like never!) And I can find joy in my hobbies like photography, playing the piano, scrapbooking, or cooking without outside approval.

Oh, but when I get a compliment? I feel the joy I already had spread throughout my entire body. Thank you, thank you for that.

Something my friend Anita commented on has been on my mind since I read it. She said, "And your pictures tell their own story - the words are just a bonus!"

But do they? Do they really?

So, before I post the rest of the pictures of our adventure, I feel the need to tell you about our park experience that day. You can call this post "real" or "honest" or "bold" if you want to :) Although I typically don't jump on bandwagons like that :) 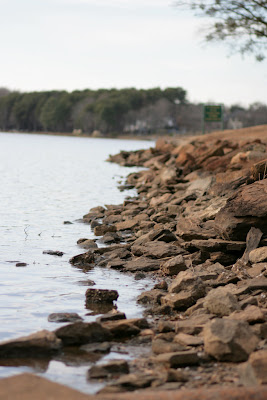 On Tuesday afternoon, it was beautiful here in my town. The temperature was in the 60's. The sun was shining with a few wispy clouds that could be seen. As soon as I picked Jaina up from school, I was inspired to take them to the park for the first time in weeks. I told Jaina, "Any park you want. You pick! Want to go to the train park? The turquoise slide park? The spider park? Or the lake park?" And just to let you know, we really do use these names we made up to refer to our local parks. Its not just to hide identifying information :)

She picked the "lake park" which was fine by me. Jayce was absorbed in playing his DS in the car and couldn't have cared less about what we were doing. He seemed happy enough when we got there, but soon I realized that he was not having fun. I was following the kids around as they played and snapping pictures left and right and not a single one caught Jayce smiling.

Then he told me he needed to go potty. The bathrooms there are despicable, but unfortunately, there weren't many trees to hide behind, either. And the park was crowded enough that I felt uncomfortable letting him potty outside anyway.

Well, as soon as he walked into the bathroom, he had a melt down. The disinfectant/musty/urine mixture was a bit strong for me, which means it was probably 10x worse for Jayce. But by this time Jaina decided she had to go and the door wouldn't stay latched, so I had to stay in there and hold it for her. Jayce decided to leave the bathroom at the same time. The classic "I'm torn between my kids and I don't know what to do!" scenario. Of course, Jayce's safety trumps Jaina's modesty, so I had to apologize quickly to her and race out the door after her brother.

Jayce's mood went downhill from there. He wandered around the playground not doing anything at all. I followed him asking, "Do you want to swing? Do you want to slide? Do you want to play sand?" and he wouldn't answer me at all. Jaina wanted to resume the game they had been playing (some pretend thing where she makes up all the rules and bosses Jayce around) but Jayce clearly wanted to be left alone.

The pictures I took of them on the swing together and the silhouette of them walking away was Jaina trying to convince Jayce to play with her. The picture of Jaina laying down on the swing was her being mopey when he wouldn't comply.

I set down my camera and tried my best to suggest activities that would interest both of them at the park. Jayce just kept getting more and more agitated. He finally said he wanted to leave and Jaina started pleading to stay. I told Jaina that we could stay a little while longer, but she needed to at least start her homework since she wasn't really playing or doing anything at the moment. She huffed off with her clipboard and spelling words, but was soon engrossed in her homework.

And that's when Jayce totally spazzed out on me. Screaming, crying, hitting, trying to bite me, the works.

Again, another "I'm torn between my kids" problem. If I had just been there with Jayce, we would have left immediately, no second guessing there! But I had just told Jaina that we could stay a few more minutes if she did her homework and she was over there on the swing obeying me.

I think she would have understood us leaving if this same scenario didn't happen quite so often.

But to be honest, Jayce ruins a lot of stuff for her. She loves her brother immensely and is very protective of him, but also resents him a lot, too. We've had to cut many fun outings and restaurant experiences short because Jayce could not handle it. I never quite know how to handle it, either. If someone else is with me, I just take Jayce to the car until he calms down. If I'm by myself, what do I do? Reasoning with Jayce in the environment that has set him off does not help. He really needs to be removed from the situation before he can calm down.

Luckily, I had spotted one of Jayce's old EI coordinators at the playground earlier. (Its rare that I go somewhere in my town and don't run into someone I know from somewhere!) I asked her if she'd look after Jaina for a few minutes while I tried to calm Jayce down. She agreed, so I carried him kicking and screaming and hitting to the car. Yep. I got lots of looks. I'm sure I'll keep getting them as he gets older, too.

One of the other problems with removing Jayce from the situation (or putting him in time out, as some people would label it), is that he very rarely wants to get out of his room or the car afterwards. We ended up sitting in the car for 20 minutes, even though it only took him about 3 to calm down. I was about to just step out of my car to call to Jaina to come join us when he said he wanted to go tell Jaina it was time to leave. So, he got out of the car and walked back into the fenced section of the playground.

That's when Jaina came running up to us and had the brilliant idea to head down to the dock by the lake.

Although it was nice weather, it is still January, so no boats were being loaded that afternoon. Since we usually only go to the park in the Spring, Summer, or Fall, its usually crowded with boaters and we aren't able to go near the lake entrance.

Well, Jayce liked this idea. And for the first time all afternoon, I got a smile. 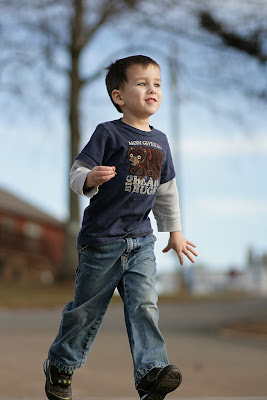 And joy found his way into his steps. 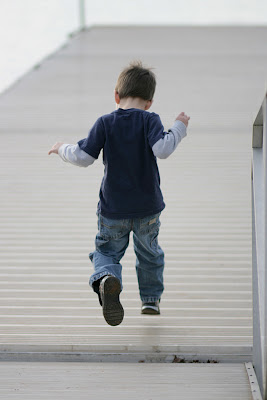 We spent an hour playing on the dock. 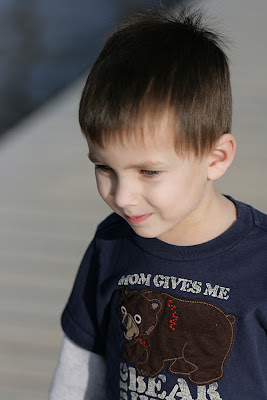 and at the "beach" part of the lake. 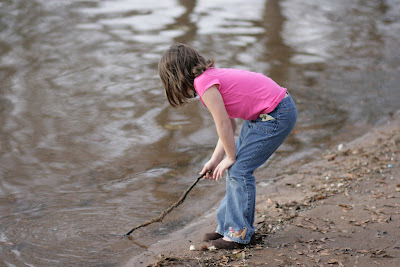 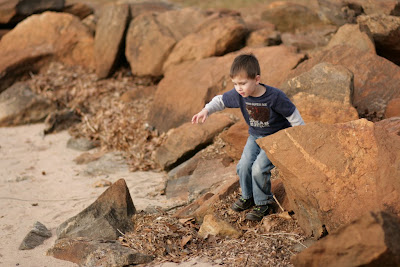 Jaina picked up shells that she would collect and then throw in the water to make ripples. 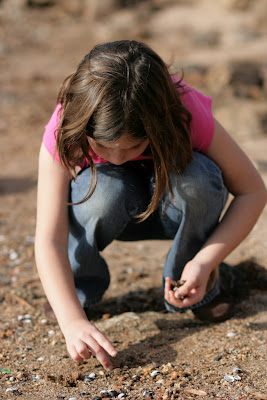 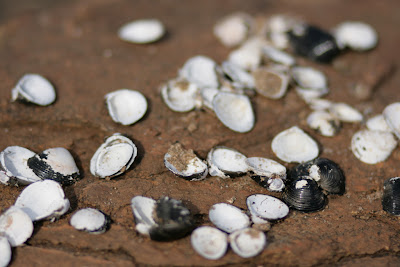 Jayce liked the sticks the best, as most boys do. 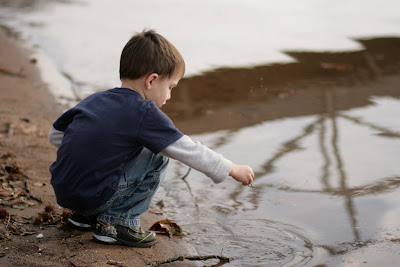 Not to be outdone, Jaina had to try it too. 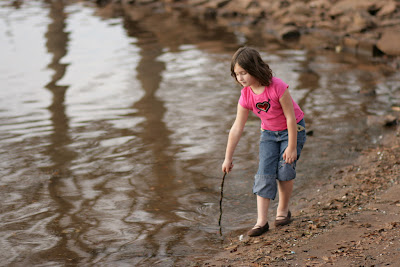 And then used the sticks to draw pictures and letters in the sand. 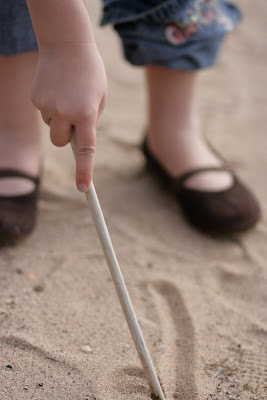 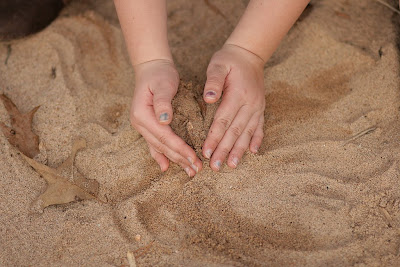 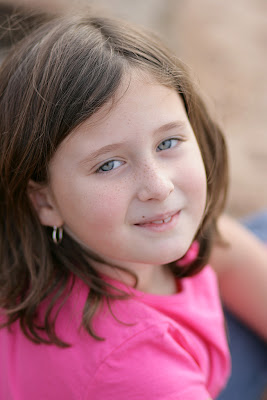 So, my little story did turn out to have a happy ending after all. As they played separately, but beside each other, I could tell that Jaina was no longer thinking about things ruined. All of her thoughts were on "When can we come back and do this again?" :)
Email Post