Because of Ali's unnatural paranoia that no guests would be able to attend her daughter's 3rd birthday party, we were able to score one through being nosy on Facebook :) And I'm so glad we did! The kids not only had a blast, but I was able to meet some more members of the church from my area.

Normally, I don't bring my camera to birthday parties. First of all, I want to have fun and enjoy it! And then there's also that little thing about needing to actually keep an eye on my own kids. But I couldn't help taking some pictures because everyone was just so darn cute! 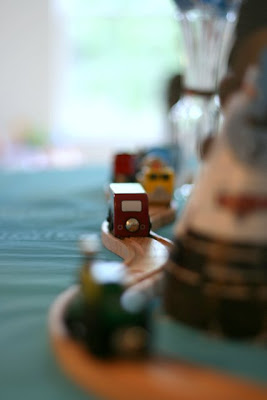 Jaina was a bit apprehensive about going to a 3 year old's birthday party. Luckily, Ali had called me ahead of time to tell me that there were going to be older kids there, too, to play with. 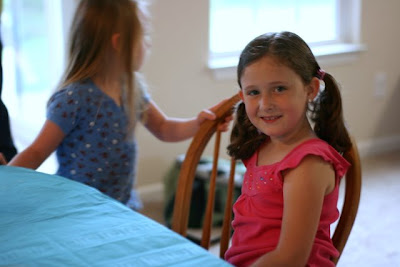 I LOVE Eliza's choice of cakes. It served as a great lesson to my daughter about gender stereotypes. When Jaina saw the Thomas cake was for Eliza, she quickly said, "But that's a BOY cake!" I quickly told her that it did not matter if you were a boy or a girl in order to like a certain character on TV or in books. I also reminded her that when *she* was two, she had a total obsession with Thomas the train. I even would reward her potty successes with pieces of track! "Oh yeah," she said. 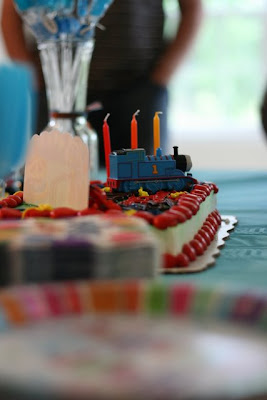 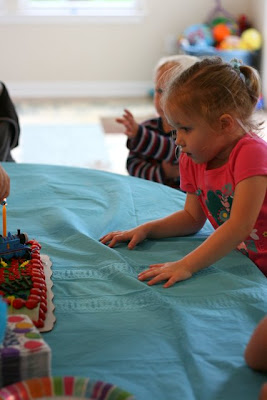 Its about that time: 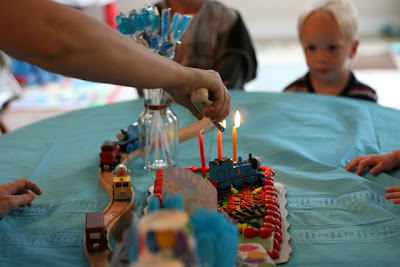 The candles are lit: 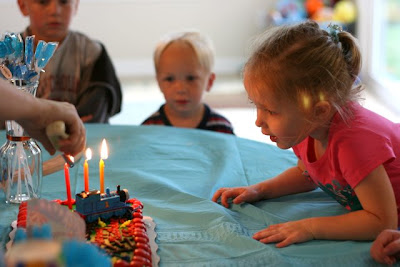 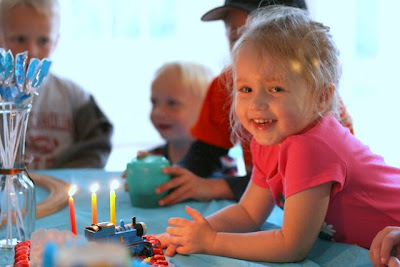 And they are out! I didn't realize until her mom blogged about it, but this was Eliza's first birthday blowing all her candles out! 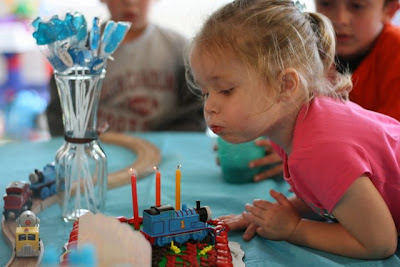 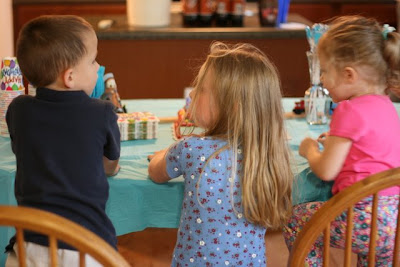 Henry, Eliza's little brother, decided that he was going to sit in a corner and make his own fun. 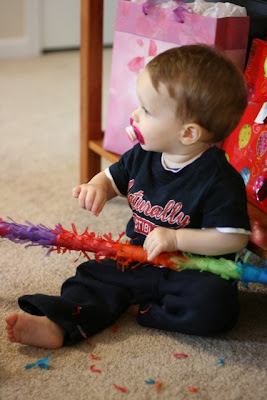 Henry crawled up on a chair, then turned to look at me through the bars with those beautiful eyes :) Couldn't have posed him better myself! 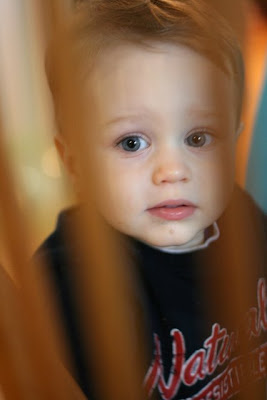 Can't resist sneaking in a picture of the newest party guest, Nathan. I don't even think he was a week old yet! Gotta admire his mom for not letting the pesky thing called "adjusting and recovering after a baby is born" interfere with her older kids' activities. 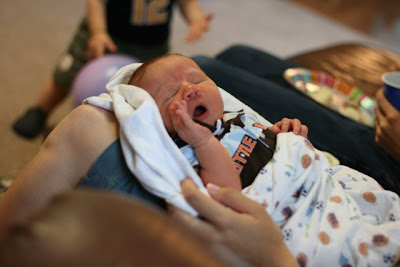 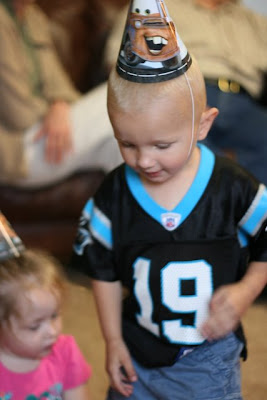 Colby, a newly mobile one year old, wonders what all the excitement is about. I wonder if he's having flashbacks to *his* birthday a couple of weeks ago? 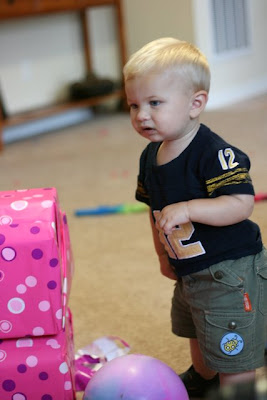 Talon, Eliza's best friend, just wanted to help her open presents. When parents interceded, this was the result. He was too cute not to snap a picture of! 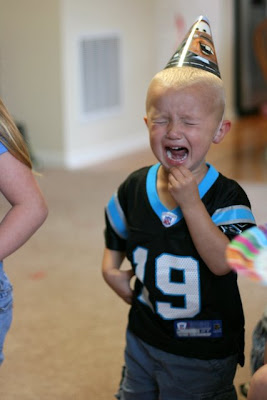 The funny thing about opening presents was that Eliza just up and decided to start opening them... without waiting for all the kids or even her parents to come watch! 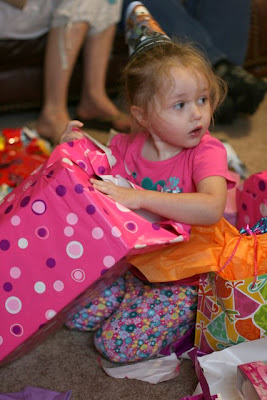 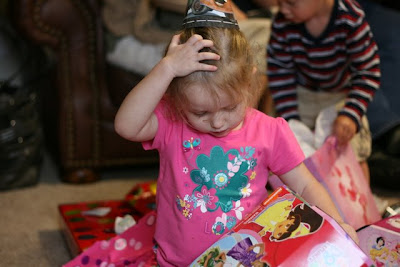 Ali had a good friend of the family's taking pictures to document the evening. I liked her. She shoots with Canon, too :) 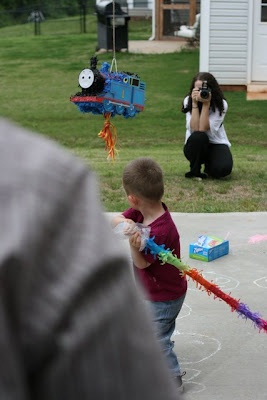 Jaina's new friend takes a whack at the pinata. 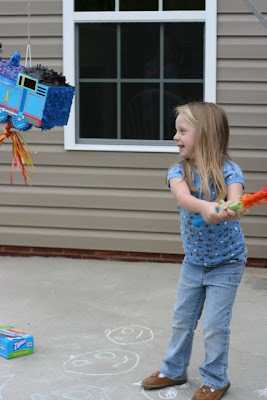 They had a Jeep car (as Jayce calls them) in their backyard. Jayce was very happy to sit in it almost the entire time we were there: 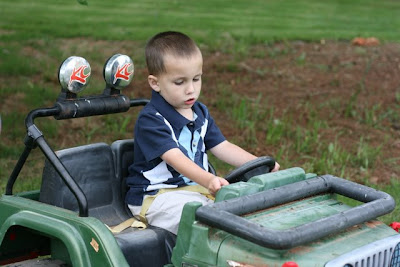 I don't think Jimmy realized that Talon wouldn't think it was funny to have candy dumped on his head. Michelle, you'll have to show your hubby that I got hard evidence! 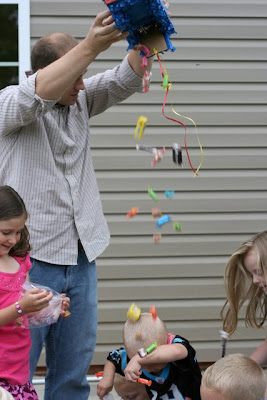 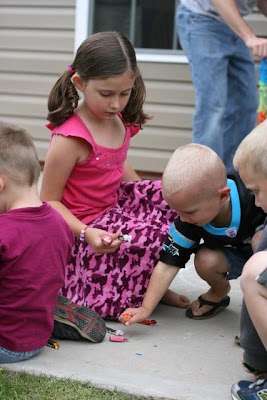 Jayce on another ride on toy: 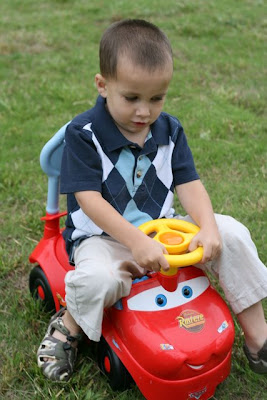